One of the things I really enjoy about travel especially during the times when I still don't have much means to see the world, is collecting. I love collecting everything about countries and cultures. I remember when I was in high school, my friends would help me with my coin collection by looking for some coins from other countries, especially my classmates who were children of seafarer fathers. 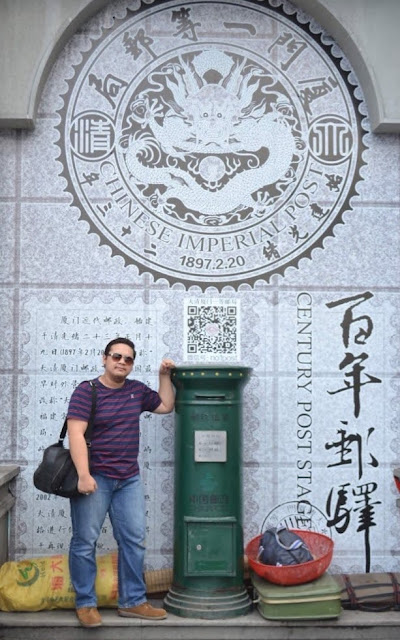 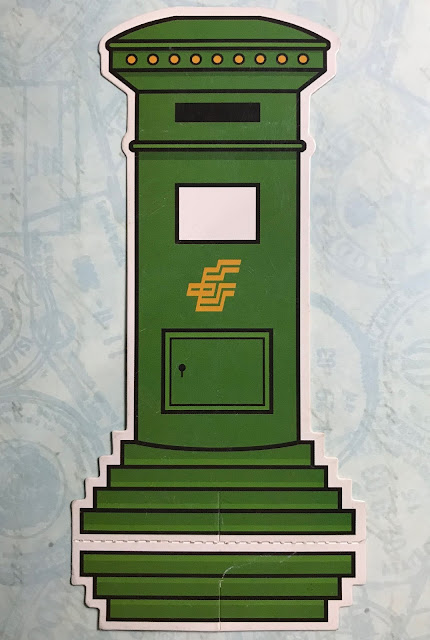 Me on a Chinese Post Mailbox in Xiamen (2014) and a postcard sent by my Chinese friend Sean (2012)
Before we continue with this post, may I invite you to visit Stevenson's Postcards Blog by clicking the banner below. I love the banner I made from the stamps of a postcard I received from Ukraine, one of the countries who really give importance to their philatelic stamps.

You can also visit my Postcards blog through the end of the top menu of this blog.

More to this, banknotes, mugs, stamps, figurines, and yes, the old-school postcards. I was already on the beginning of my working years when I found out about the gem of a website called postcrossing.com where it helped me send and receive postcard to and from total strangers. Total strangers who some of them became my life long friends who even until now I haven't met but still get in touch with. I haven't been active to postcrossing for many years now but I just had the urge last weekend to try and revisit my old postcard boxes. Glad that I did because I get to reminisce on a lot of memories, times that I would love to bring back soon when this pandemic gets over. 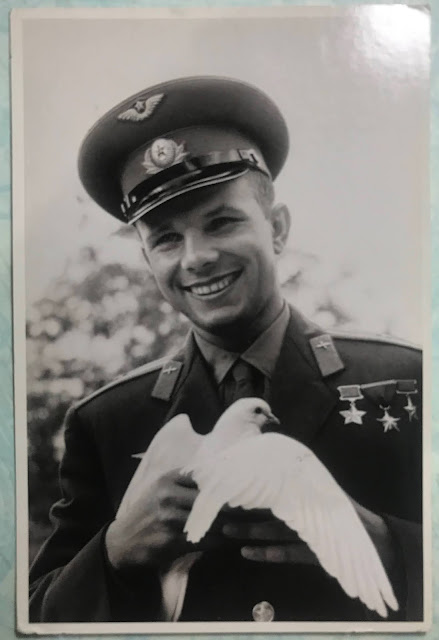 One of my favorites - Yuri Gagarin, first man on space.
With this, I thought of a way to not just organize my postcard collection, but also to share them with those would love to see my collection. Most of my postcards have different subjects but my favorites are traditional costumes of countries, men in military outfits, and notable people. I also love map postcards and landscape views. So I thought last Sunday as a stress reliever for a heavy week that passed, to start a blog for my postcards. Not much words, just the front and back of my postcards per post and a sentence about it. And of course, the beautiful stamps that were used to send these precious cards to my mailbox here in the Philippines. 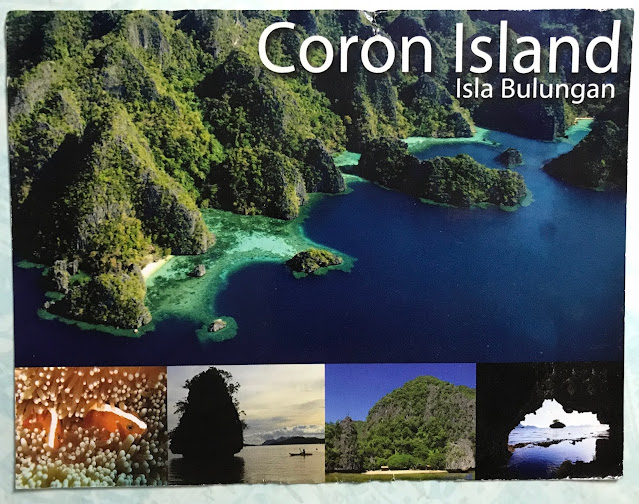 Sent to me by my sister Judy. This was an emotional find for me, it was the first trip that we were not together due to booking conflicts. That month, she went to Coron Island while I visited Japan.

There's just so much stories as I browsed through my collection. A lot made me nostalgic, some made me teary eyed just like my sister's postcard above from Coron Island in Palawan, Philippines, while a few made me laugh like the one below were I sent myself a postcard from the US while I was in Imperial Beach in California (Is that normal? To send one's self a postcard?) 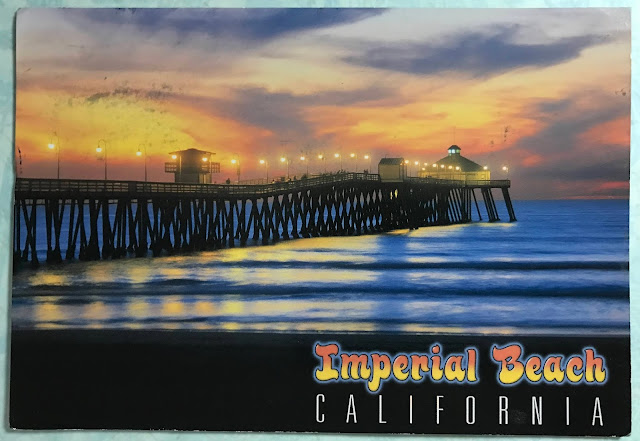 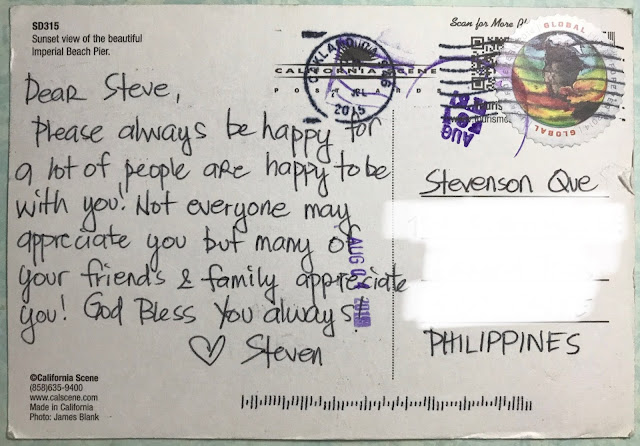 Sent myself a postcard to the Philippines while I was in California. What's with the emo message?

Just like blogging that led me to know a lot of friends, postcrossing and postcards have been a good way of leading me to amazing people who lives across the world who are destined to be my life-long friends. An example is the postbox shaped postcard I featured on the very first part of this blog, which was sent by Sean from China. He was just a high schooler when I receive his postcard (he sent the 3rd postcard I ever received from postcrossing). and almost a decade now, he is now working in Shanghai and I am very proud of it just like a big brother.

I still have contact with a number of the friends I met through postcrossing and I am very grateful for the friendship that we have through the years. I haven't got the chance to meet any of them though. Last December would have been a first when I was about to meet up  in Amsterdam with a very close German friend who I knew from postcrossing 8 years ago (He was about to drive 4-5 hours through his motorcycle from Hamburg). His hotel has been booked for our meeting but unfortunately, days before our meeting, an emergency happened to her mother. We were both sad about it but I am still hopeful I'll get to meet him in God's time. 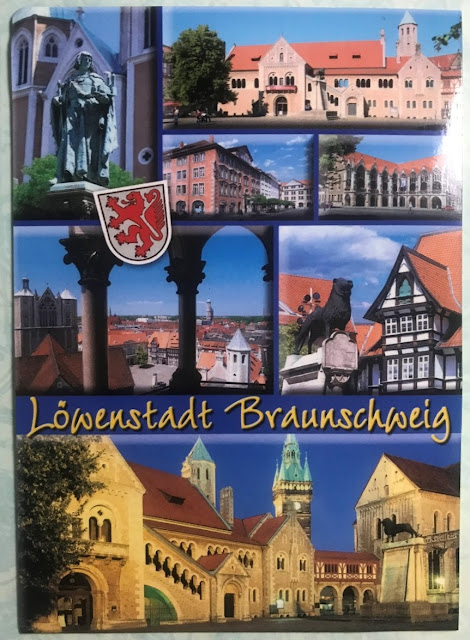 And speaking of Germany, one of our dearest friends Iris Flavia from Braunschweig did send me a postcard which makes me super happy, I don't know if she knows this but her postcard is the first one I received for 2020! (Not counting a couple of Christmas cards from my dear friends from Russia and Finland that I only get to see when I got back home from Europe which were sent from 2019).

I thank each and every person stranger and friends who sent me these beautiful postcards through the years. I believe I have almost 500 in the span of me being active in postcrossing 5 years ago. Hopefully I can get back to postcrossing because I really love receiving postcards from different places, and of course sending them as well :)

Never stop making friends beyond borders!
Stevenson
***
I would love to welcome and invite everyone to join Timeless Thursdays.