Last 2012, me and my high school friends went out of the country for our first ever overseas trip together! I told you about them right? My classmates since kindergarten until high school? It was crazy reunion for us during those 4 days in Singapore and Malaysia. Let me share some memories with you all on this trip to one of Singapores most iconic theme parks, Sentosa! (Please bear with my shots though, I'm still not very good with the Manual Function during those times HAHA)
Before the Malaysia Trip, our first stop was the Lion City of Asia, Singapore! Singapore is a City State in an island located at the bottom tip of the Malay Peninsula. It boasts of being a Fine City, Fine in the sense that each and every simple thing that is prohibited will force you to pay a fine which is nice so that locals even tourists would have to abide by it. 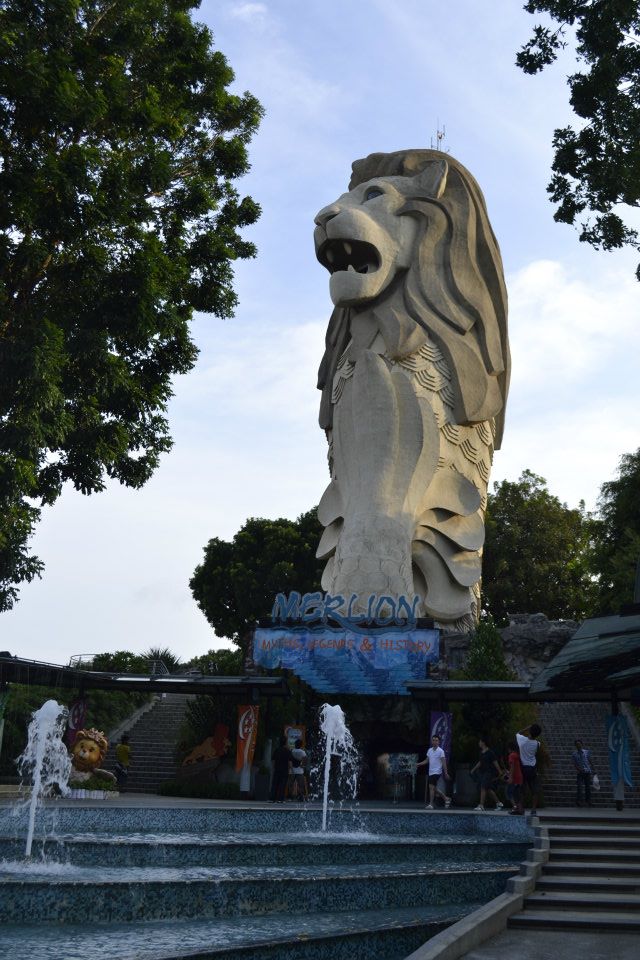 The Merlion at Sentosa

One of the best places to see in Singapore is Sentosa, an island resort located at the island of Sentosa which houses several places including Golf Courses, Hotels and the Resort's World Singapore which features the Universal Studios Singapore. Getting there, ride the MTR (Purple Line) until the last station which is Harbour Front until you reach Vivo City which is Singapore's Largest shopping mall. On the Third Level, the shuttle monorail train which is officially called Sentosa Express will take you to the island.
Several packages are available for purchase before boarding the Sentosa Express but a 3.50 SGD Entrance fee should be paid as well excluding the package. We arrived in the afternoon so we chose to avail of the Evening Play Pass for just 26.90 SGD you can now choose three of their attractions which you can enjoy from 6 pm until 10 pm.
When we arrived at the park, we had a few photos taken at the Merlion, okay not a few, a lot of shots taken at the Merlion (I was with my camwhore Friends during this trip remember?) And then after a lot of shots, we went to our first ride, it is the Luge and Skyride. We first rode the Luge and it was so much fun! We were riding downhill on a three wheeled cart with only go and breaks which is so much fun! I bumped on one of the railing which gave me a hard time going downhill! but when I got through it, the ride came swift and fast. Until I reached the end! Amazing, really! 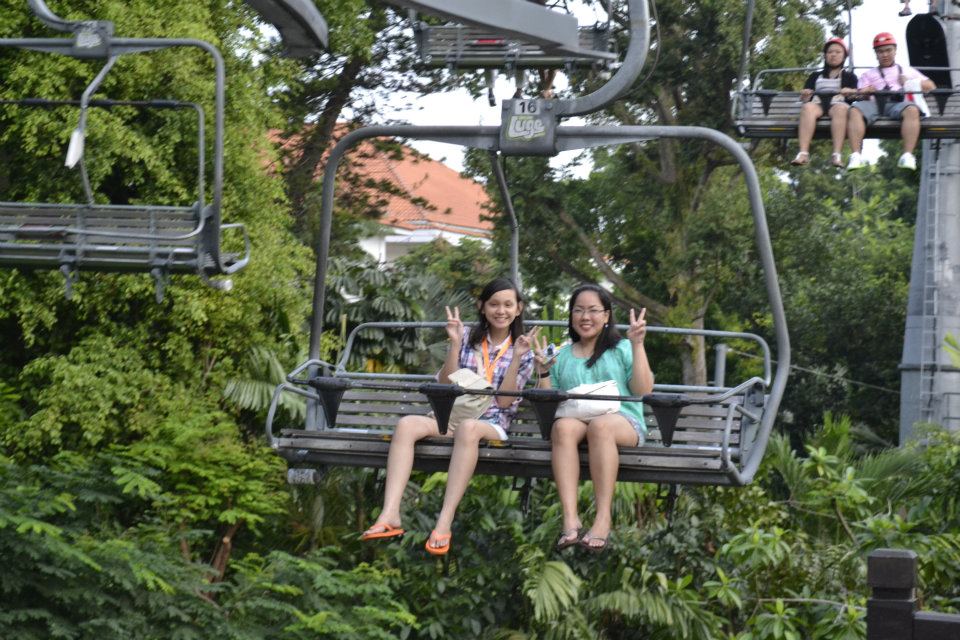 Ate Judy and Myrcel on the Skyride

On our way back, we rode the Skyride. A maximum of four people seated on an open air gondola (I don't know if it's called a gondola but I'll call it one anyway) and you will go up high about a hundred feet above the ground and it feels so good while you are up high! I chose to ride alone so I can feel the thrill! I was wearing flops and my feet started to sweat but I got hold of myself and it was really fun! Some of my friends still have this strong fear of heights. I overcame mine when I went Skywalking at Cebu a few years ago.
After the ride, it was time to get to the Songs of the Sea, a famous production inside the park and was our Second of the three attractions for our Night Pass. But the way to it was the most memorable part of the Sentosa Trip for all of us. Guided by the map, we were confident to walk downhill hoping that we will reach the Songs of the Sea in no time. We went walking and walking downhill and then it started to get dark and dark. The sun is slowly lurking down and massive hedges were blocking what's left of its rays. It's like we are on a scary horror movie trapped on a massive hedge maze. 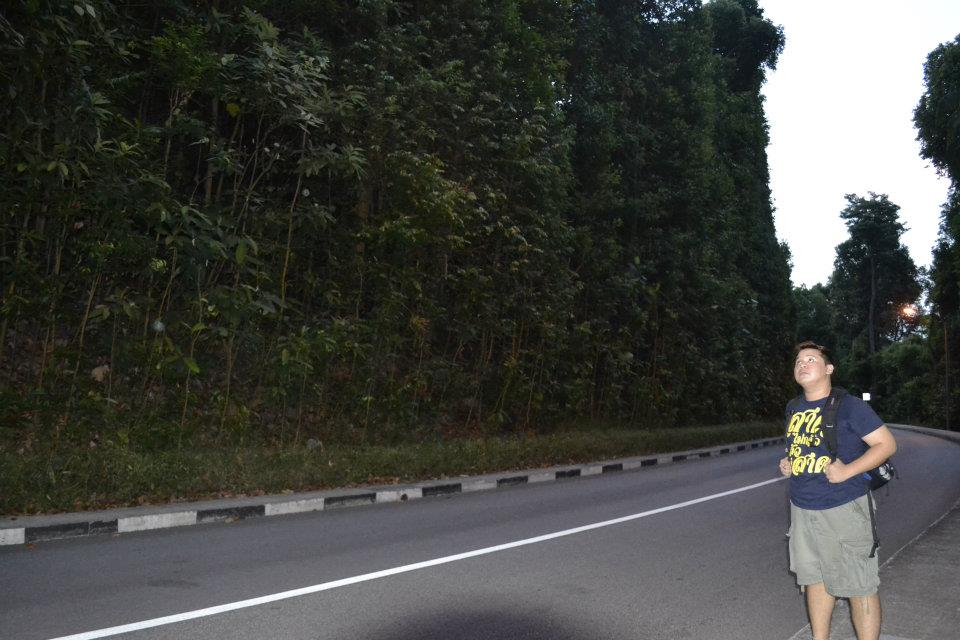 Then when the road seemed endless, we can't help it but just laugh and laugh because when we saw the entrance to the Golf Course, there we were, truly lost. That's what we are, laughing at ourselves knowing that we are indeed lost. But we continued walking downhill until we saw the bus that took us up again to the Park proper. 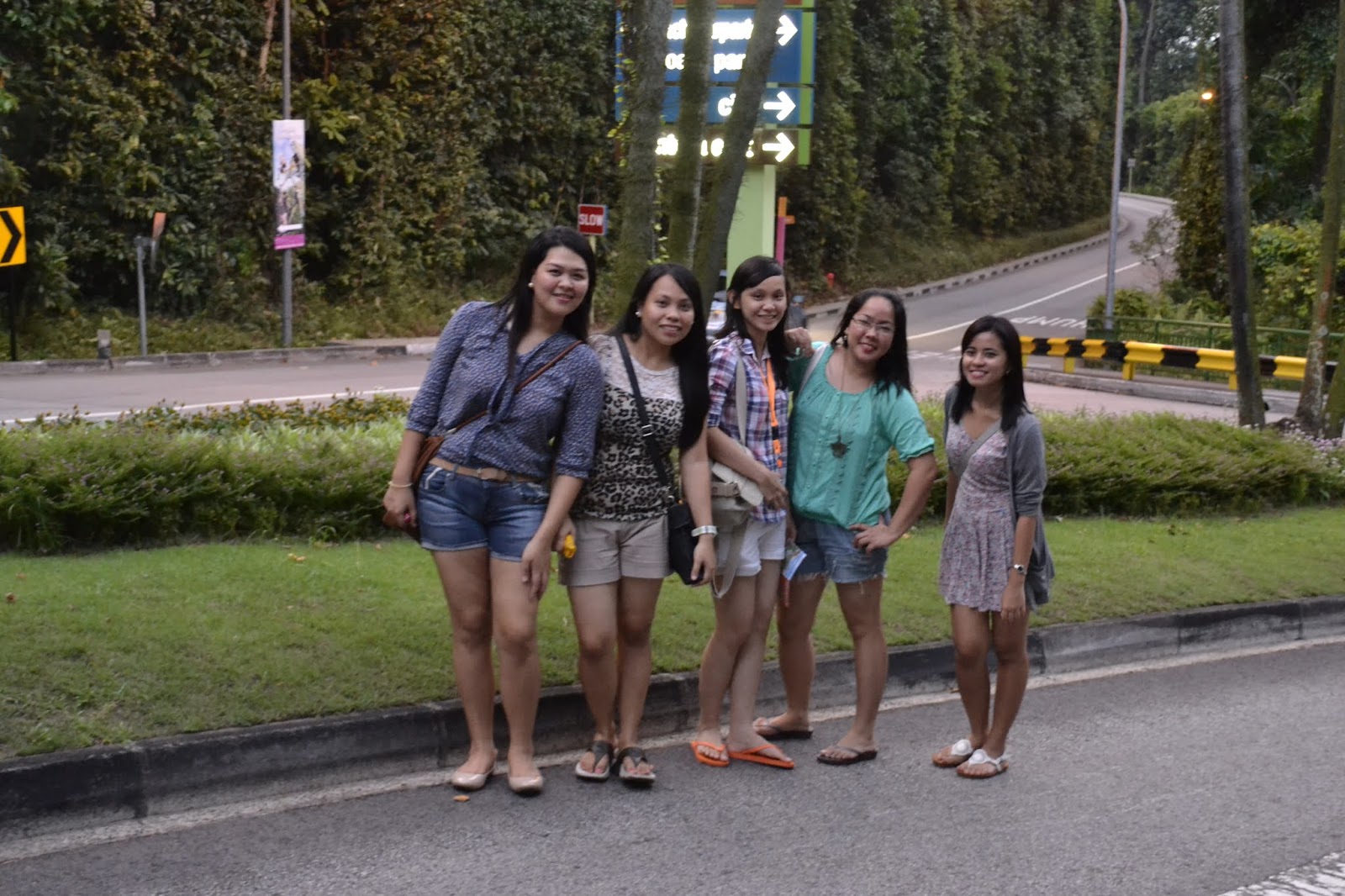 Random lost girls we passed by (Kidding, they're my classmates)
We were so relieved! Then when we went got down the bus, we were just a few yards away from the Songs of The Sea where we should have been a lot earlier right? We went inside the outdoor theater and the view was spectacular! The story was set along the beautiful stilt houses built on the shoreline of the beach. The staging was beautiful and the laser, lights and fire effects were truly amazing! Here are a few shots of the Show: 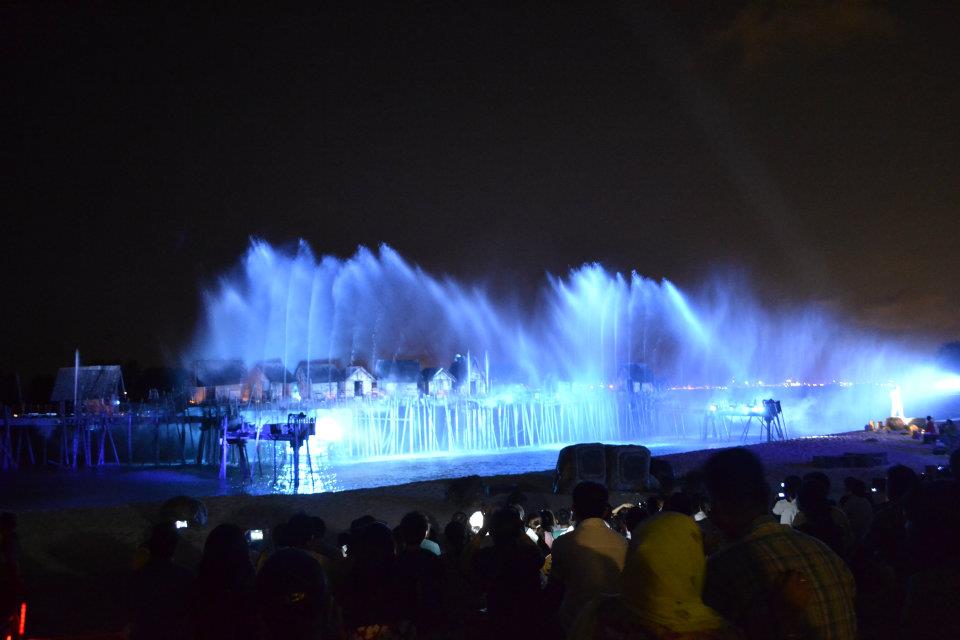 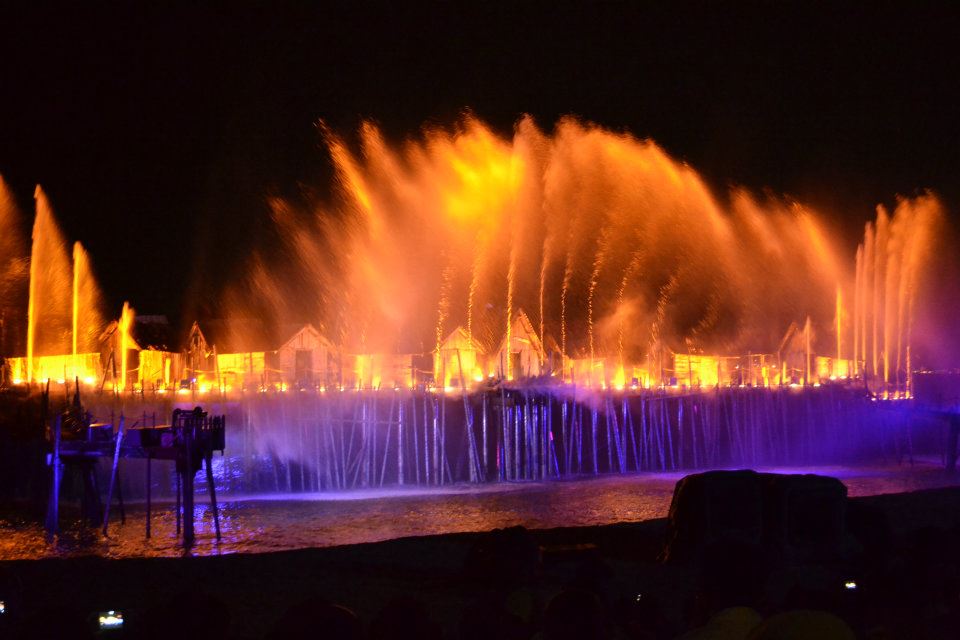 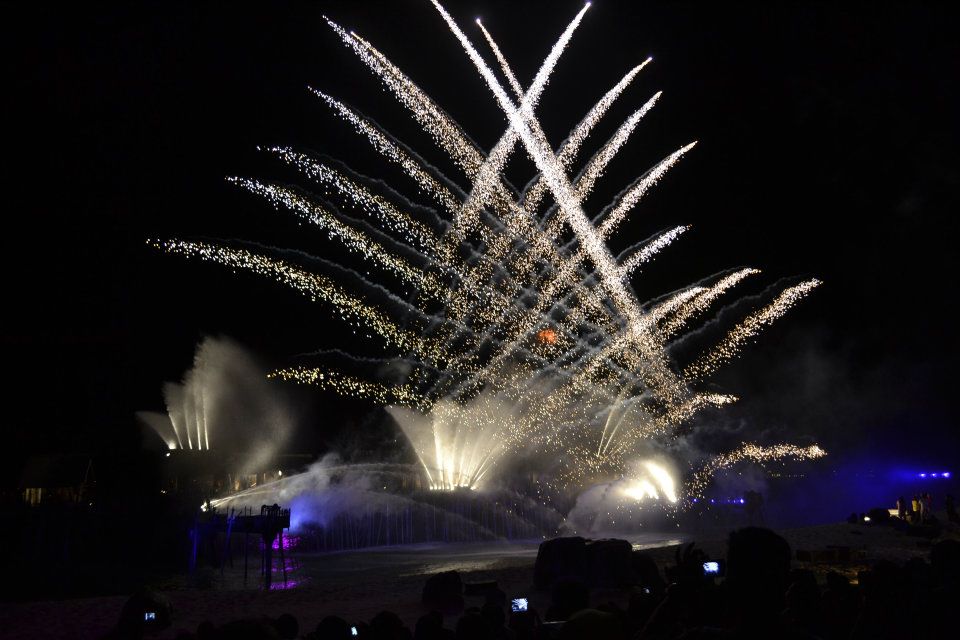 After the show, we grabbed a speedy but heavy dinner at McDonald's then we went straight to the Cable Car Ride which will close at 9:30 in the evening, we chose this one as our last of the three Attractions since it will take us back to Harbour Front so that we can ride the MTR back in time because we still want to see the Marina Bay at Night. we rushed our way and the people are nice enough to accommodate us. While boarding, the view was absolutely fantastic! So Beautiful that my eyes were fixed on the view and my camera was left on the bag haha!
Sentosa was amazing! It is a mini world of the Asia we know. It has musical sights and colorful sounds that will truly leave a mark on anybody's hearts forever. See it for yourself! It was amazing! 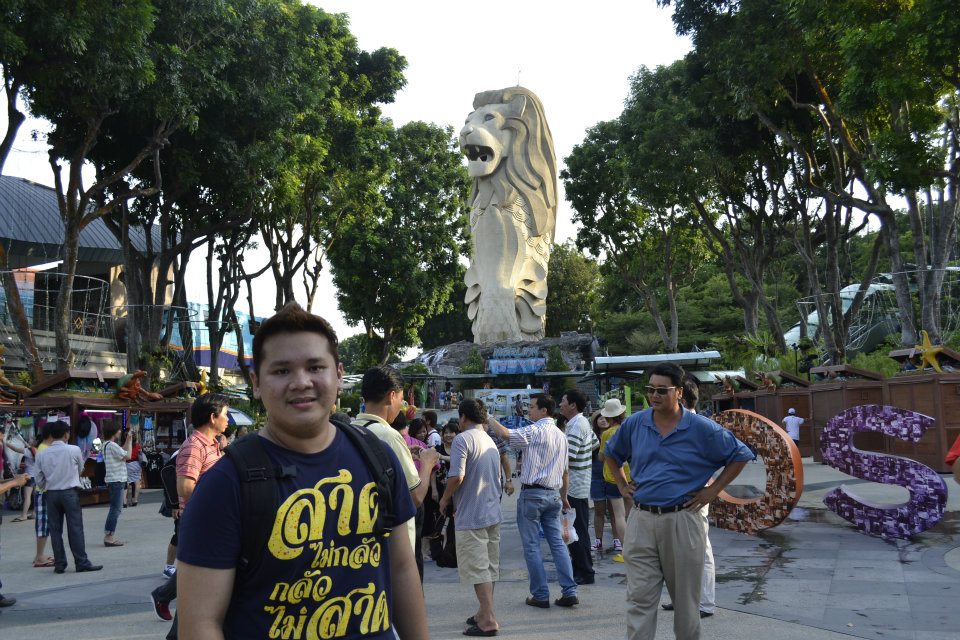 Me at the Merlion in Sentosa

Never Stop Dreaming!
Steve :)
***
I would love to welcome and invite everyone to join this new Linky that I thought of starting - Timeless Thursdays.