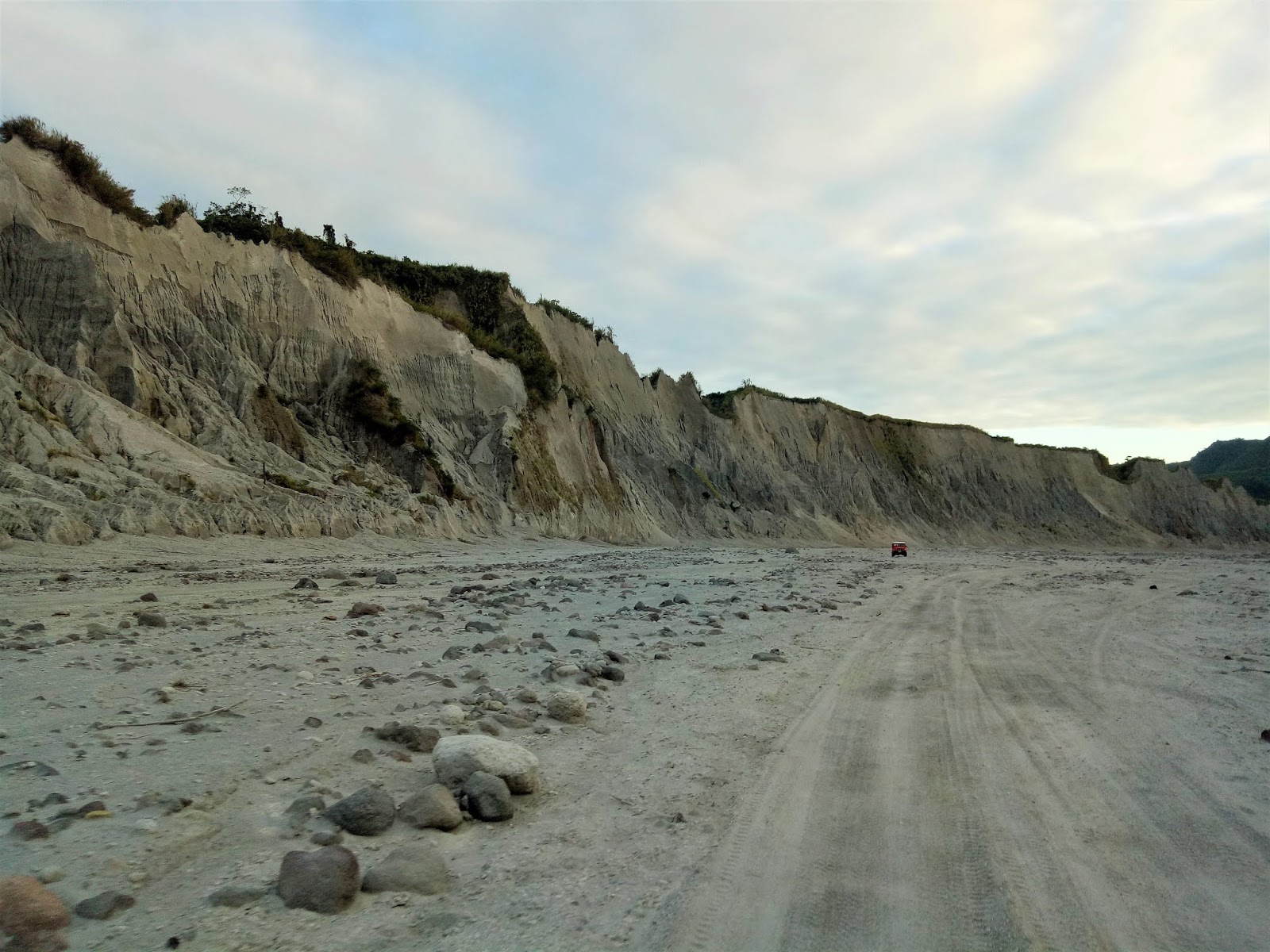 Off-Road to Mount Pinatubo
It was a day after my Grad School orientation which was 4 hours of commute to and from my hometown. My High School friends have been bugging me all day and night to join them on their trek to the famous volcano, but how will I ever make it without much sleep? I arrived home at around 8 in the evening feeling sick and if I was about to join them, I have to get up at 1 in the morning - Yes, just barely 4 hours of sleep, to climb a volcano! But hey, I said, let's do this!
We left Cavite at around 2 in the morning and waited for other joiners in Quezon City by 4. We left when we were complete. By the way, our group joined an organized tour, TakeFive Outdoors, complete with guides and 4x4 rides that will take us to the jump off point of the trek. the mountain range where Pinatubo is part of stretches to multiple provinces so we arrived at the province of Tarlac to make our way by wheels and by foot to the province of Zambales where the crater is located. 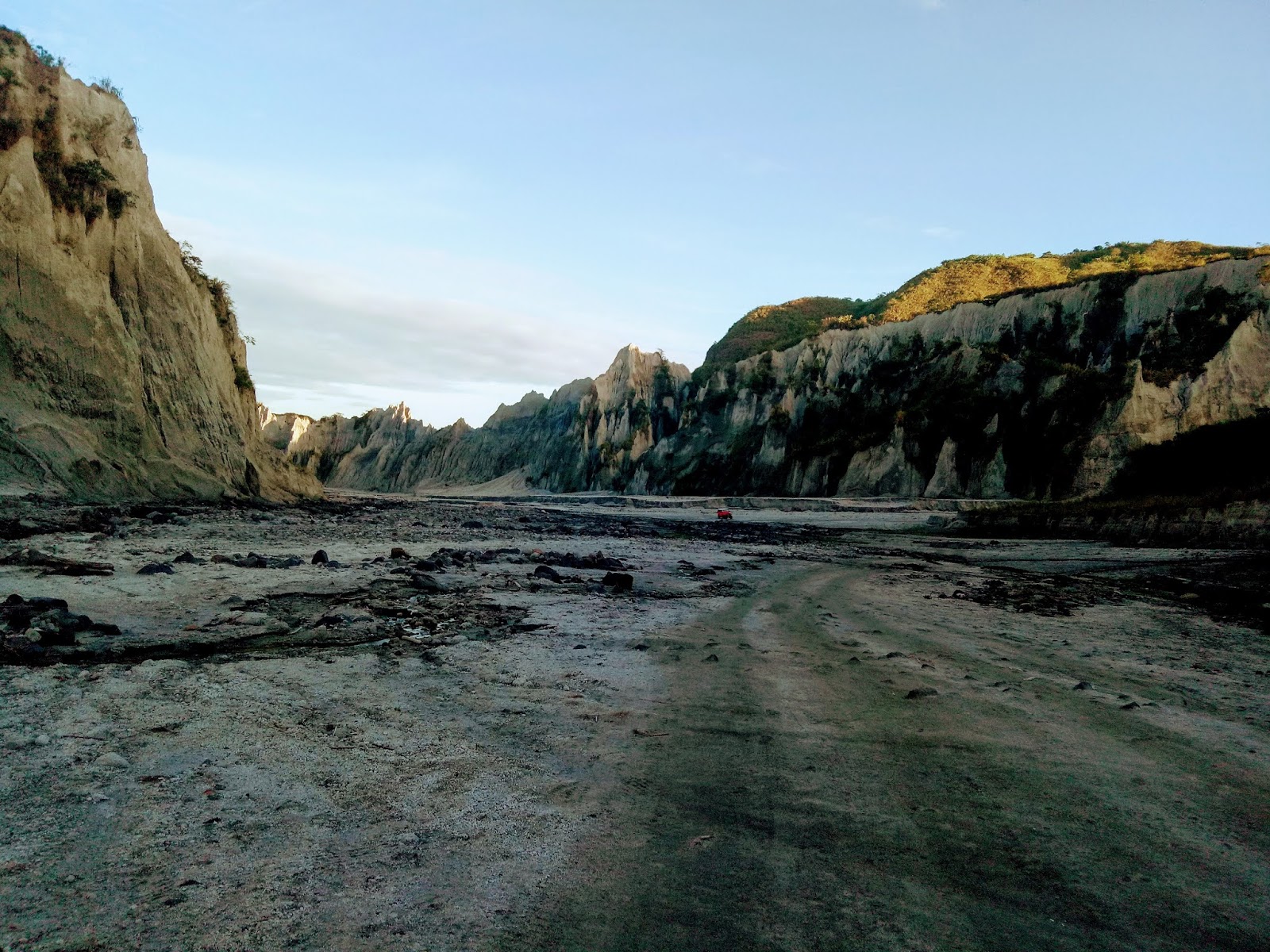 Unusual Landscapes - Am I still in the Philippines?
We rode on our 4x4 vehicles about half an hour before day break. It was amazing because it really feels like a literal "adventure" because we are on the back of these huge jeeps! When the sun started to rise, we were at awe to be on a totally different world! Everything around us is like pictures of the moon! There's lahar in just everywhere! Our guide told us that just three decades ago, everything there were covered with lush greens and sadly, large communities of people who were buried alive by the massive eruption. 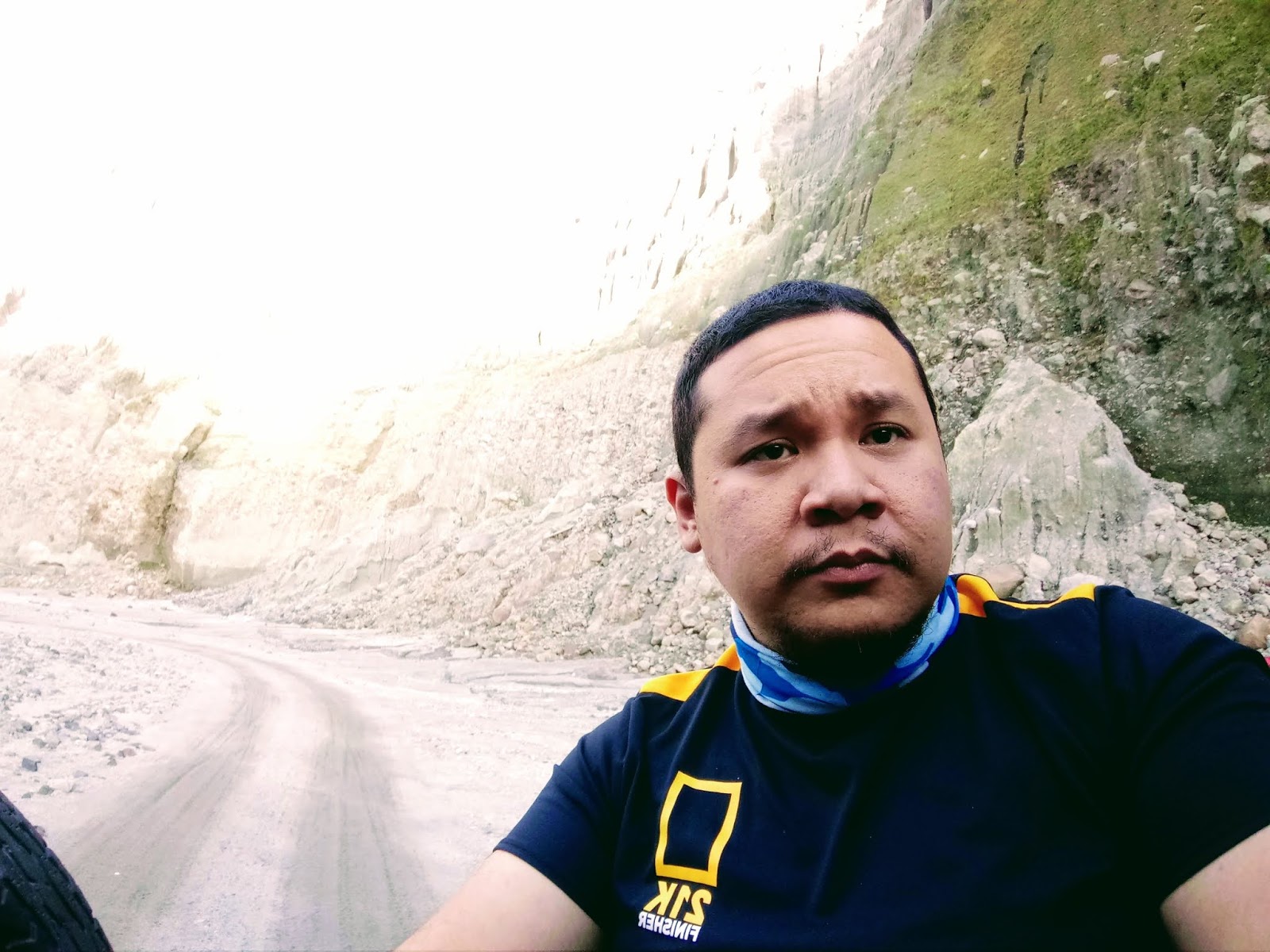 Four hours of sleep and a volcano to climb. Wore my 21K Finisher shirt as a driving force.
We crossed a lot of streams and huge rocky drifts but our energies and excitement are sky high due to the beauty of the unusual landscape that surrounded us. I have been to more than 40 of the Philippines' 81 provinces including amazing spots like Palawan and Boracay but personally, this is the most beautiful place in my country I have ever been to so far. But that's not yet it. 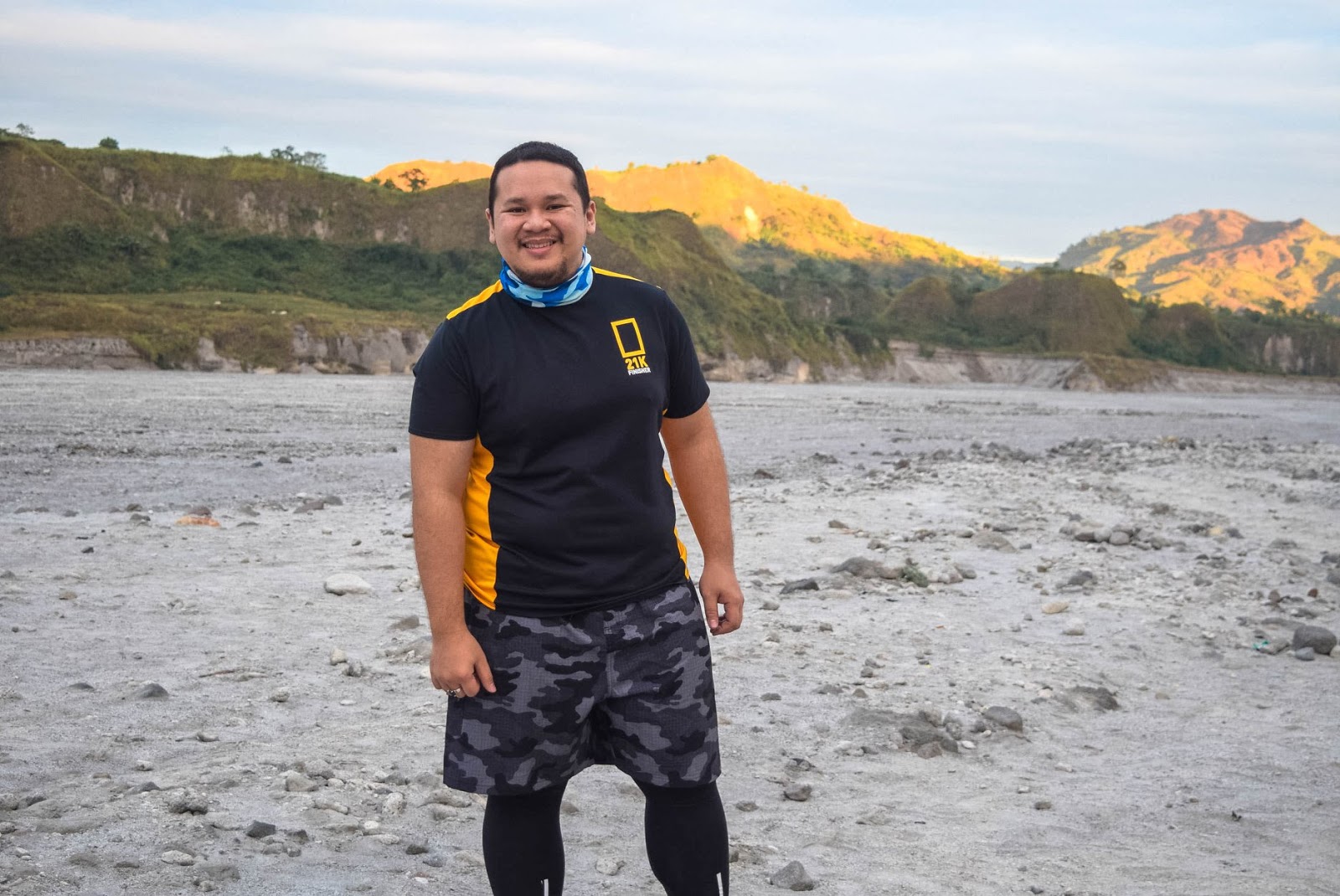 Strike a pose! (Photo by TakeFive Outdoors)
What we love about the tour group that we joined, TakeFive Outdoors, is that we also have a Photographer with us. One thing Filipinos love are pictures not just of landscapes but yes, of ourselves. Well I for one but especially my friends! It's not about being conceited or vanity, we just really treasure moments that much, especially me who admittedly is a very sentimental person.
Moving on, we stopped by this large patch of lahar and sand to take more pictures and interact with the locals that were there. It was a very heart-warming moment to be able to bond even for about a half-hour with the Aeta kids. The Aetas are one (and actually the first) of the three original tribes (Aetas or Aborigines, Indonesians, and Malay) that first came to the Philippines during the prehistoric times. With their interactions to travelers passing by, they speak good Tagalog and English aside from their native Kapampangan. They are very sweet kids and I really felt blessed at the beginning of this journey because of them. 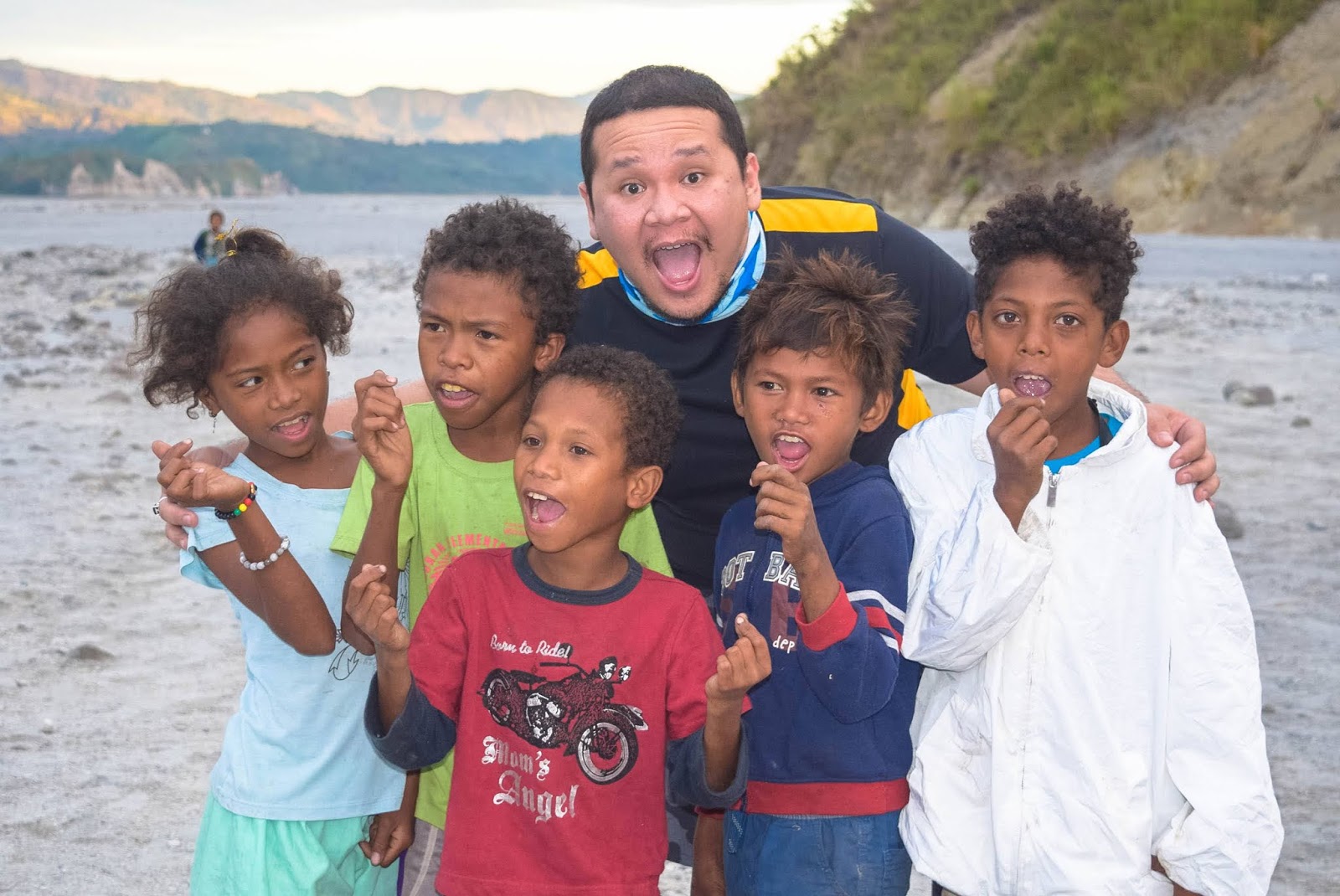 Found new friends! God bless these sweet kids
I bid goodbye to my friends and we went back to the jeeps to bring us further into the jump off point. We had to go down and leave the jeeps behind because the streams are starting to get deeper, rocks much bigger, and entries become narrower. 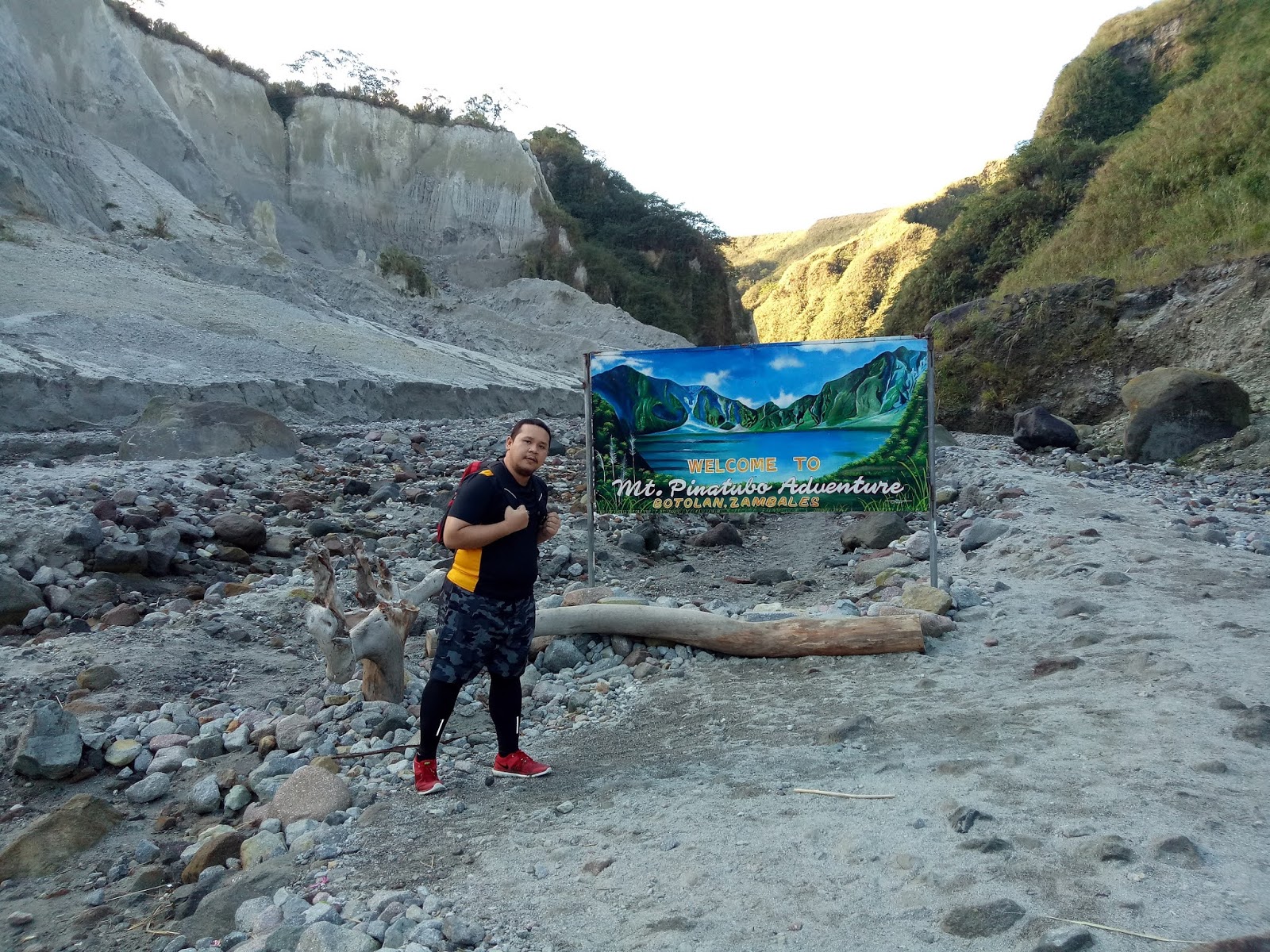 Welcome to Mount Pinatubo
These might look like a welcome point but we already walked a good half an hour to reach this part. Imagine how far it would have taken the earlier travelers since the volcanic eruption of 1991 that displaced tons of lava and rocks around the area and even as far as 34 kilometres in the air and 480 kilometres across reaching our neighboring countries despite us being an archipelago.
After 500 years and more of being dormant, it killed a lot of families and burried cities and towns that were around it, including the US Military bases in Subic and Olongapo which was then left by the Americans after the eruption. Until now, when heavy rains and typhoons pass by Central Luzon, the lahar that was left still posts as a big danger to the nearby areas. 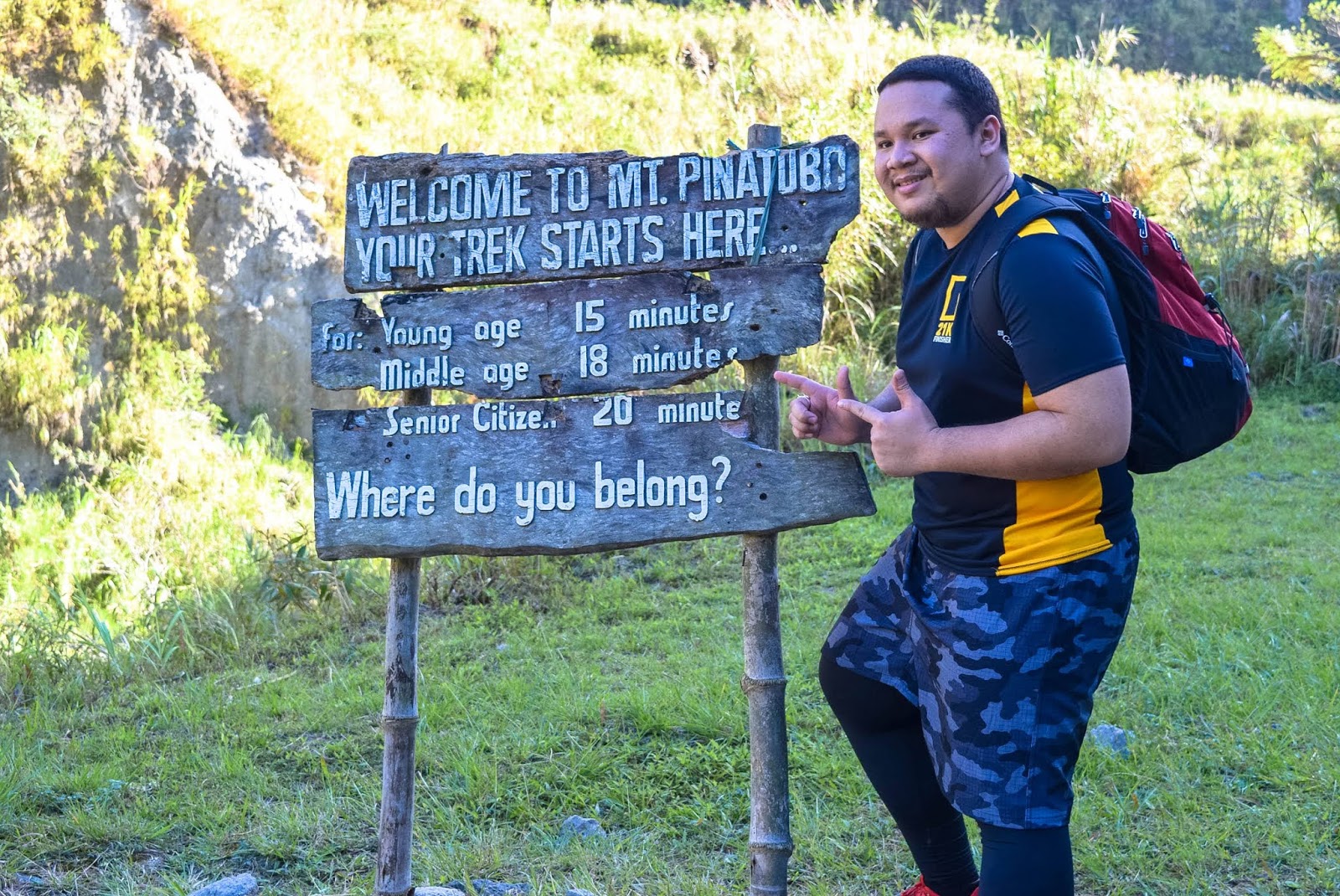 Who's excited to see the Crater? (Photo by TakeFive Outdoors)
From this signage that you see, it says that at my age, it will take us about 18 minutes more. But behold, me and my friends reached it after more than 30 minutes! HAHA We are even worse than the Senior Citizen rate that was posted on the signage! Well maybe if you are a triathlete and people like those, then really, it might be possible to reach it on the listed duration. 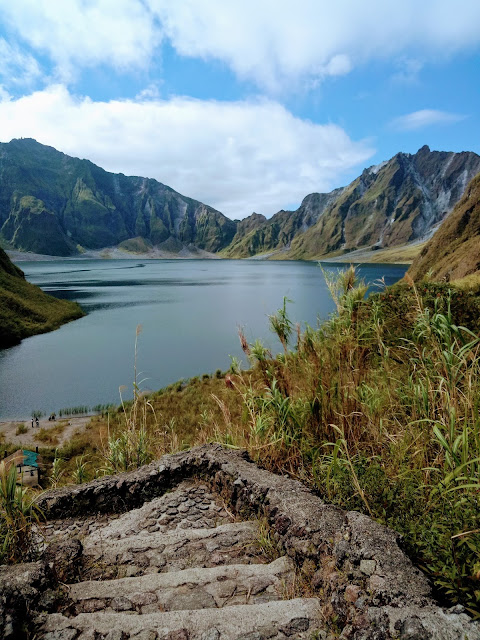 Path from the terrace park to the Crater Lake
Truly, the views will fill up all the efforts and sweat that one would take. It was a bit sad though because one of our friends twisted her ankle and she decided to just stay at a hut where people rest at along the way to the crater. The aeta family there were very nice and even gave her pain medicines. Look at that view! That very lake you see is the gateway to all the destructive materials from the earth's inside that killed and displaces families across our islands. 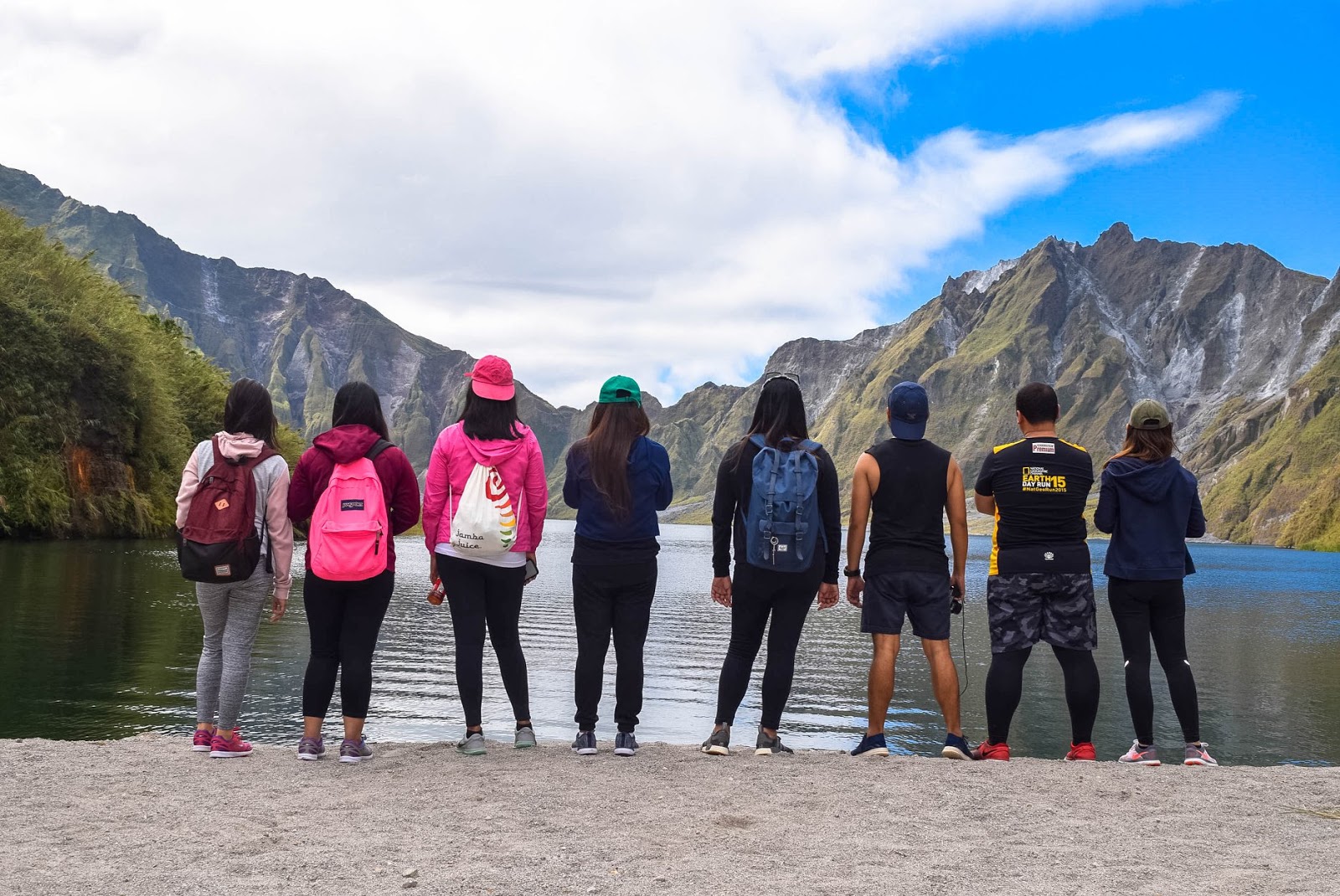 The gang! Me, my High School Friends, and their three nieces (Photo by TakeFive Outdoors)
It was a beautiful moment to be there in such an amazing spot on earth. I kept thanking the Lord every time I look at the crater lake not just for the beautiful view but for reminding us that His power through nature should never be underestimated. And of course, I thank my dear friends who I shared this amazing journey with! Always an amazing memory with these people. Cheers to 26 years of friendship, that's 85% of my life!
After about an hour of appreciating the views and taking pictures, we started our descent. It was a lot faster than the hike up of course but it's an amazing feel because even if we just used the same trail back, we discovered new things on the opposite direction of things, also because we passed it by on different times of the day. 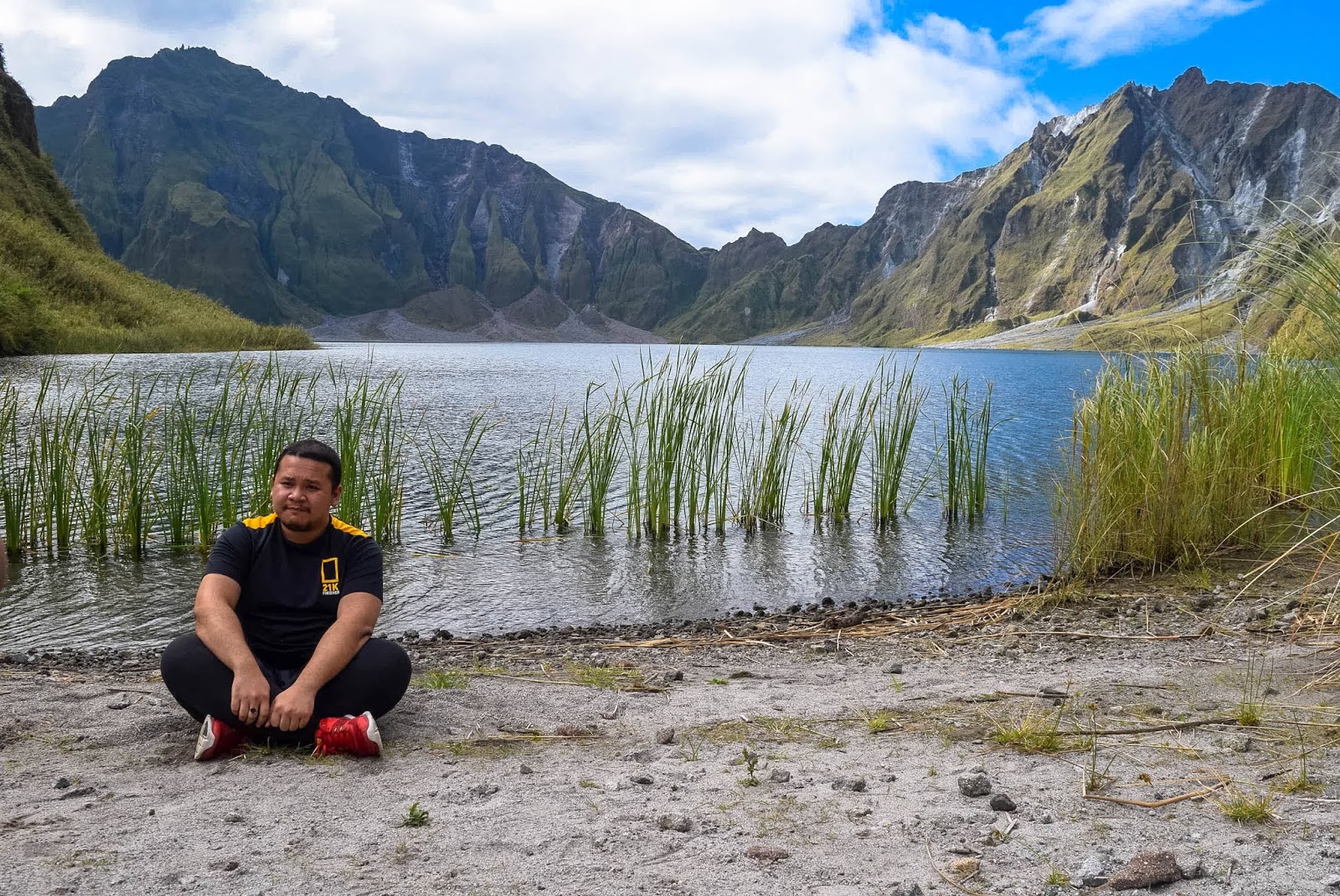 At the lakeshore. (Photo by TakeFive Outdoors)
The eruption of the Mount Pinatubo has been devastating to millions of Filipinos at the beginning of the 90's. I just turned one year old and a few days that day when noontime turned into night. For me as a Filipino, it is a timeless memory of sadness and grief but also a timeless story of nature, of reality, and of hope. And for me as a citizen of this life, it is a living memorial of something so scary and something very beautiful at the same time, which makes me respect nature a million times more.
Watch the First Part of my Pinatubo VLOG
Pinatubo is a living memorial of what used to be and of what is now, and at the same time, a reminder that one that is dead can be given a new life again - a new beginning for a devoured society and also a wake-up to a sleeping, deadly volcano.
Never Stop Climbing!
Stevenson
***
I would love to welcome and invite everyone to join Timeless Thursdays.