It's been four long weeks since the last Timeless Thursdays, it was the 9th run of the meme, and now it's making a comeback (if only you guys can still remember and wants to join). I know memes are supposed to be consistent but my sincere apologies, I hope you'll still give me a chance to start them time to time when life permits me to.
For this week, instead of sharing just one memory, I'll be sharing a few photographs from my several trips to China, through the years, and will try to share a portion of the story behind it with as much as I can remember. For those of you who don't know yet, I am whole-heartedly a Filipino, but I am a quarter Chinese and I am proud of my heritage as a Filipino-Chinese.
At the end of these memories, I would like to ask you all, which of these photos and stories spark something in you?
*** 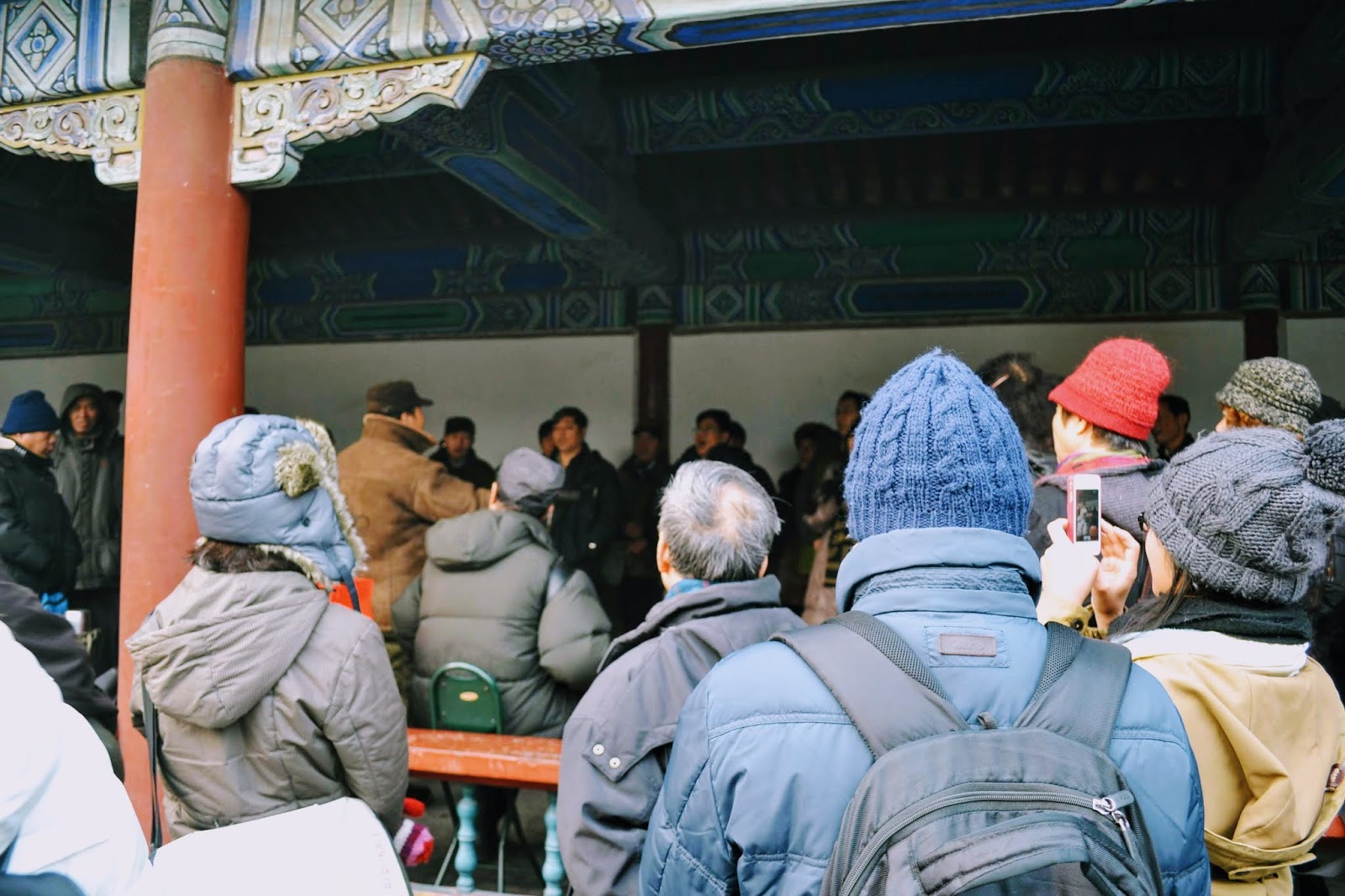 BEIJING - January 12, 2013
What you see above is not a tour group. these are complete strangers. There is no announcement or a product endorsement here, they are all in the beginning of a performance. Yes, this is one of my most memorable experiences on my first trip to China. As we walked to the Temple of Heaven, we passed by several groups singing together. At first we thought it was a choir practice but no. As I was watching and appreciating their beautiful song, I looked back and find myself in the middle of so many more Chinese people singing the song with all their heart. These are songs that they all know, probably thought from school, but the mostly senior group sings them with so much pride and honor. I think they are singing for their country.
I was so regretful to not be able to shot that moment on video but hey, I think I'm not regretful at all because I was standing there in awe. In the middle of the song, I felt so emotional because I have never seen, in my life, a group of strangers singing traditional folk song together as one. It was the most patriotic thing I have ever seen, I felt like I was on a real-life Les Miserable setting. As they were all singing, the Chinese man beside me held my hand and sang with so much conviction. He seems to be mouthing the words and asking me to sing with him, but of course I don't know the song so I just smiled and watch him sing. After the song we all clapped and all hundreds of them went on to do their strolls. It was a very beautiful moment, very documentary worthy.
*** 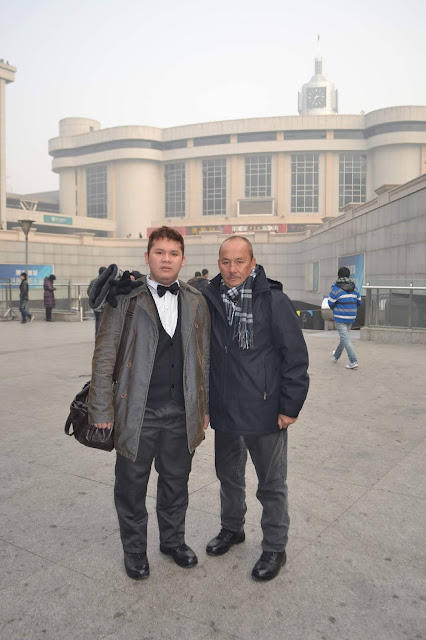 TIANJIN - January 11, 2013
It was our very first winter experience. The photo above shows me and my dad on the Tianjin railway station. This was the very first overseas trip I did with my father after my childhood days in California where we once lived. Since it was winter, there were not much tourists so it was a delight for us to travel around the busy cities of China. We were amazed by how eerie and cold it was, and saw the beauty from the eerie and quietness of Chinese winters in the northern part of the country. For somebody like me, the first winter experience was magical. Not the first for my Dad because he lived a few years in Iran where he told me stories of harsh but beautiful winter seasons.
Though it did not snow the whole time we were there, seeing everything so gray and white and cold and frozen is just a delight for someone who lived all his life in the tropics. 22 countries after, I still haven't seen snowfall except for a few flurries in Prague last December. I pray that I can experience a beautiful (but not harsh) white winter.
*** 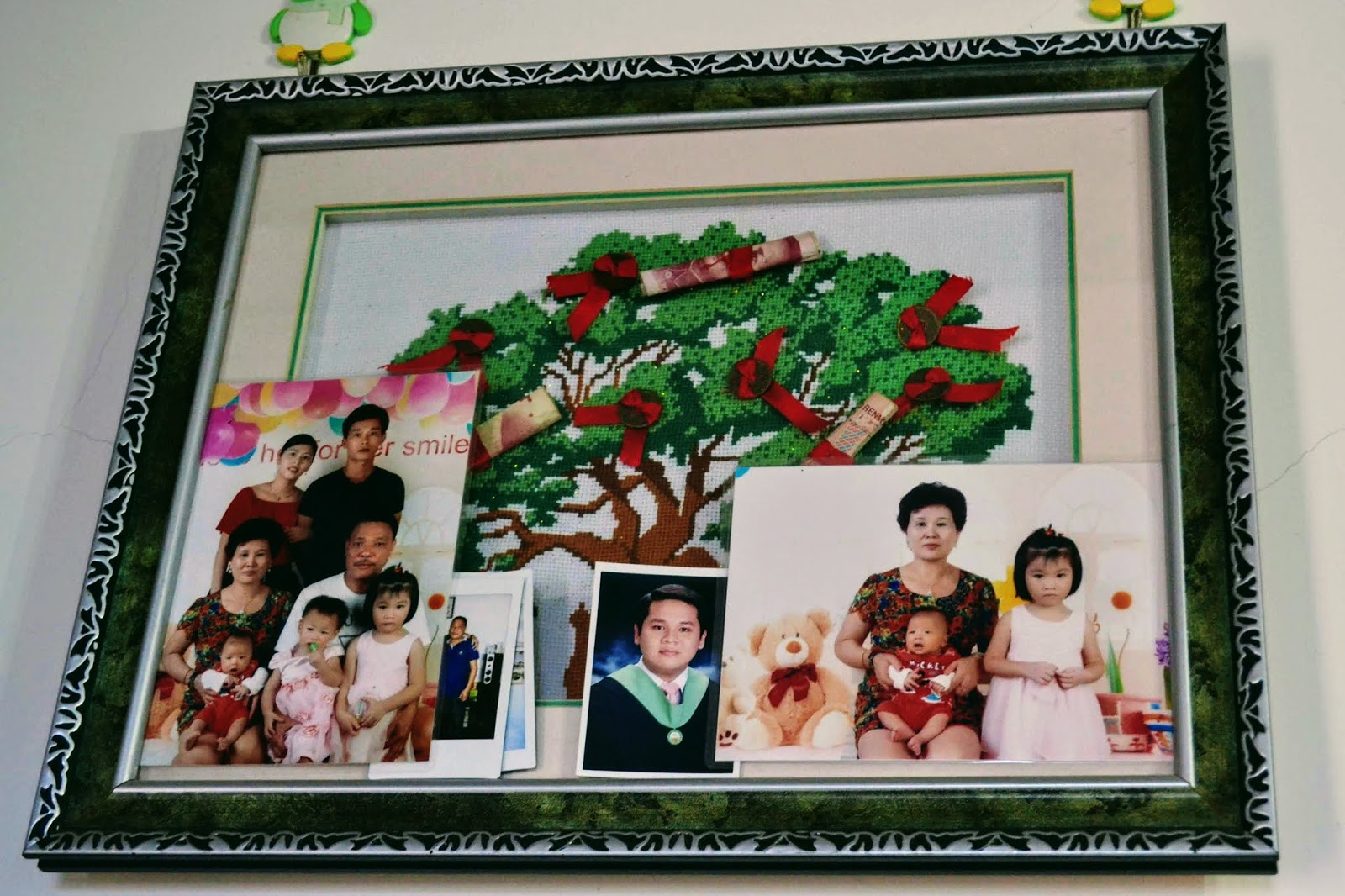 JINJIANG - November 4, 2014
This was at my father's cousin's house, one of my Chinese uncles. He was not just my uncle but he was also my father's friend. My father was born and raised in the Philippines but whenever he visits my Grandpa's hometown, my uncle has been so nice to my father and they grew a bond. Sharing this photo because this is another touching moment for me.
We spent 4 days in Jinjiang and Quanzhou to visit my grandfather's old house and seaside town and my uncle's family took very good care of us as their guests. I was so happy to see all of the for the very first time. They speak no English, and I speak no Hokkien. So for them to remember me, on the first day I saw them I gave them a copy of my University photo as remembrance.
And on our last day in the city, they invited us for dinner, it was amazing! My uncle's wife and his daughter-in-law prepared a very delicious Chinese table for us filled with seafood and fried rice and fruits and vegetables! Then when I went to the restroom, I passed by this family frame. There I saw my photo. How can you be more family to them than seeing your photo on their family pictures. I haven't seen them since, I hope they are all well and healthy at the moment.
*** 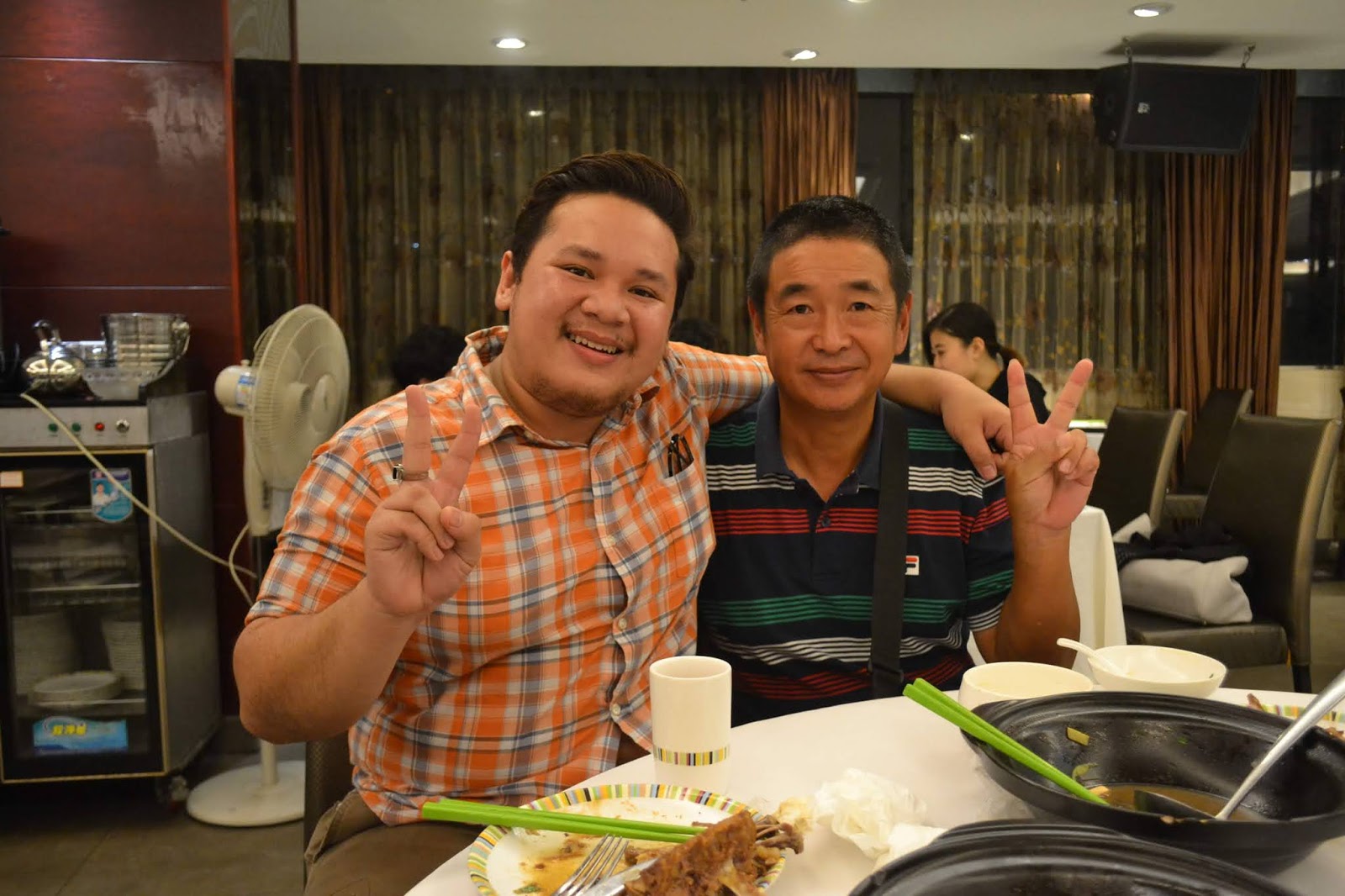 XIAMEN - November 8, 2014
Xiamen was our entry point and our last stop for my 2014 trip to South-eastern China. We visited an uncle in Jinjiang, my aunt in Fuzhou, but we know nobody in Xiamen. Luckily, my Uncle Vincent who lives here in the Philippines has a very good friend who lives in Xiamen. I call him Uncle Cai, he is the one on the photo with me above. We may no be related but Uncle Cai adopted me and my dad for a few days like we are not just guests but family. He doesn't speak English, and I can't speak Hokkien as well so it was hard for us to converse but these are just moments when you seem to understand what they say that the hearts speaks louder than words.
I can still remember when he picked us up at the airport, I was quite afraid that we might get lost because I am not familiar with who he is, his face, or his name but all has been arranged by my uncle Vincent and Uncle Xiao in Fuzhou. So we waited for all people from our HSR train to leave until there's a man holding a paper with English letters and there it was, my name! Even from the very first meeting I felt very comfortable with him and he is such a cool person! he took us around Xiamen for three days and it was amazing! The food, the sights, getting to know his family members, it was such a joy! When they visited the Philippines a year after, I never missed the chance to see him. We still get in touch through chat but I hope and pray that someday I can visit him again in Xiamen and we can bond. He's one of the best people I have met and known through my trips. I was in tears after three days of being with his family when he dropped us off at the airport, okay I can get too emotional. I very much thank my Uncle Vincent for letting me know such a wonderful Uncle in Xiamen.
*** 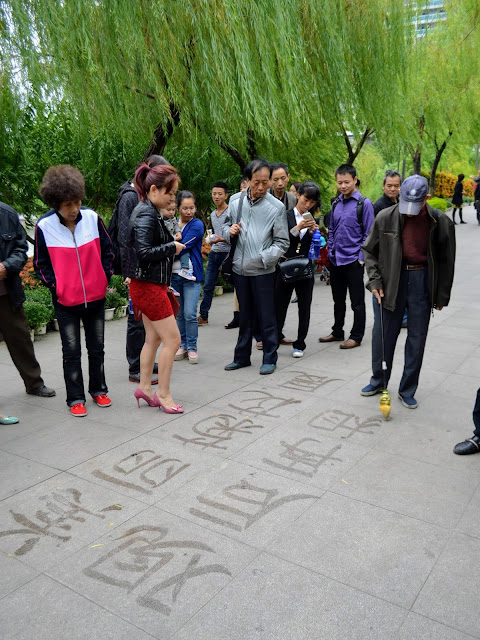 FUZHOU - November 7, 2014
This is a very touching moment. While walking at the park with my father and his cousin, my aunt Wai Ning, we came across this old Chinese man writing characters on the park tiles. His strokes are amazing, even as per my aunt who writes artistically perfect calligraphy. I was so amazed by him and he even wanted me to try it but I can't write in Chinese. I can feel he wanted to talk to me and I myself wanted to tell him how amazed I am with his talent (He uses a plastic tube with a piece of foam at the end, sliced purposely to have that brush end. Water is filled in on the tube and works as ink on the dry tile which then dries up after a few minutes to nothing). My aunt said that he is not just a good calligrapher because what he is writing are verses to a poem.
My dad was so amazed and he had a light conversation with the old man (my dad speaks some good Hokkien) and he gave a small tip to the old man which he is not asking for. At first I gave my dad a bad stare because it might arrive as an insult but the old man was in tears for joy. I think it's not really because of the money but what my dad did, I think the old man understood that it was an act of appreciation for his art. He hugged us so dear and I was also on tears and the man handed me the brush! I don't want to take it because it's his and I just can't do anything about it but he was insisting so I just gave him a hug and took it with me. 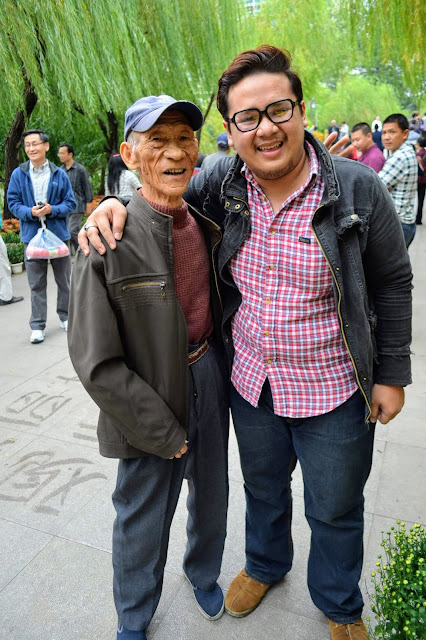 FUZHOU - November 7, 2014
As we walked away he was looking at us with a big smile and he waved at me. I was literally on tears on a crowded part of a Chinese park, so dramatic huh? But that moment was so touching. We traveled to our next cities with that pole brush on my bag and it even made its way to the Philippines (we had to detach the brush head though as advised by the airline crew. It's here in my room, I just don't know where, but the memory of that old man and his kind and appreciative heart is with me forever and will never be unseen.
***
I would love to welcome and invite everyone to join this new Linky that I thought of starting - Timeless Thursdays.