Half a day at Amsterdam: A Self-Guided Tour 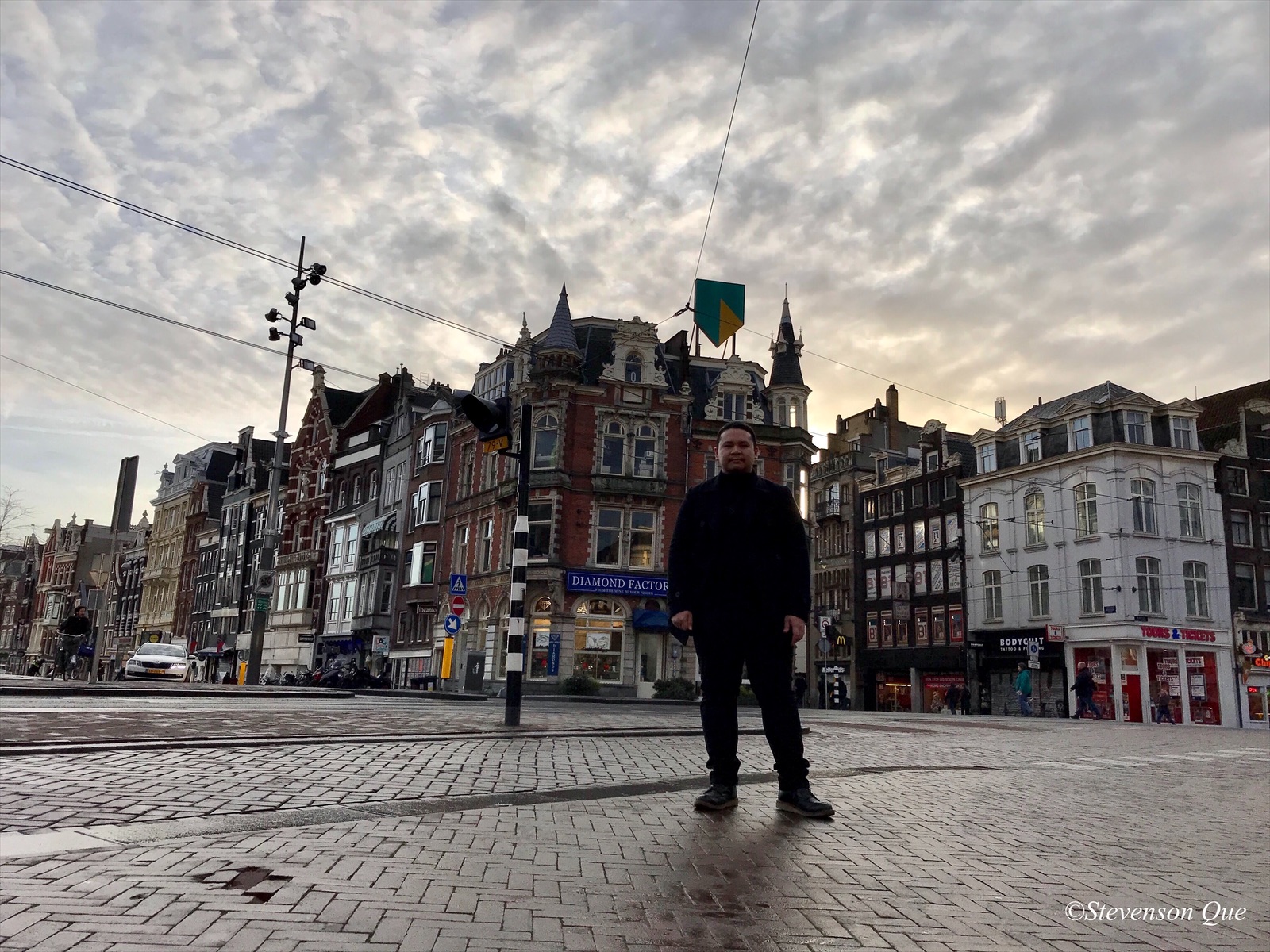 Me on one of my favorite cities in the world!
From your favorite movies to those deep song lyrics, Amsterdam is a favorite setting. I was so blessed to be able to find out how beautiful this canal-connected city is. Located at the north of the Netherlands, this capital city is home to the most scenic cityscapes that have been preserved of its distinct architecture for hundreds of years. A city I fell in love with despite going around it all by myself, a city I would love to share with you through this Self-guided walking tour that I did last Winter Break. 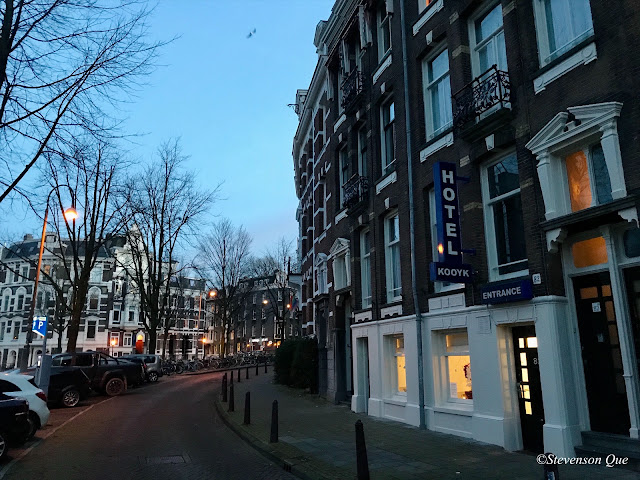 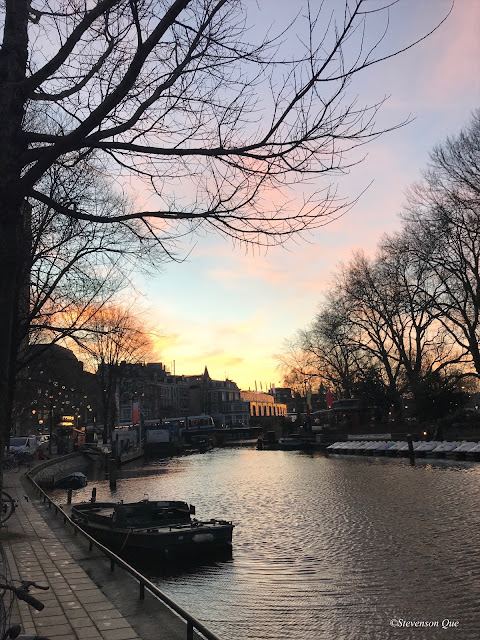 Hotel Kooyk at Leidesplein
Since I started my first day by going straight to my hotel from Amsterdam Sloterdijk station (I rode a 7-hour bus from Paris via Flixbus), let me start of my guide from Leidesplein where my hotel, Hotel Kooyk is located. Leidesplein is famous for it's bars and busy nightlife but the place I stayed at is located by the river bank 400 meter walk away from the busy bars which makes it quiet and still even at night.
Since it was winter, you can see how dark the sky was on the photo at my hotel but that is already 8:30 am. The people there were very accommodating and I thought I'd confirm for myself my reservation just to be extra sure. A few of the staff were Filipino and so the welcome was extra warm.I would definitely recommend Hotel Kooyk not just for its location and amenities but also value for money. You can contact them through phone or email but I booked my stay via Booking.com.
Hotel Kooyk
Leidsekade 82, 1017 PM
Amsterdam, Netherlands
+31 20 623 0295
http://www.kooykhotel.nl/
info@kooykhotel.nl 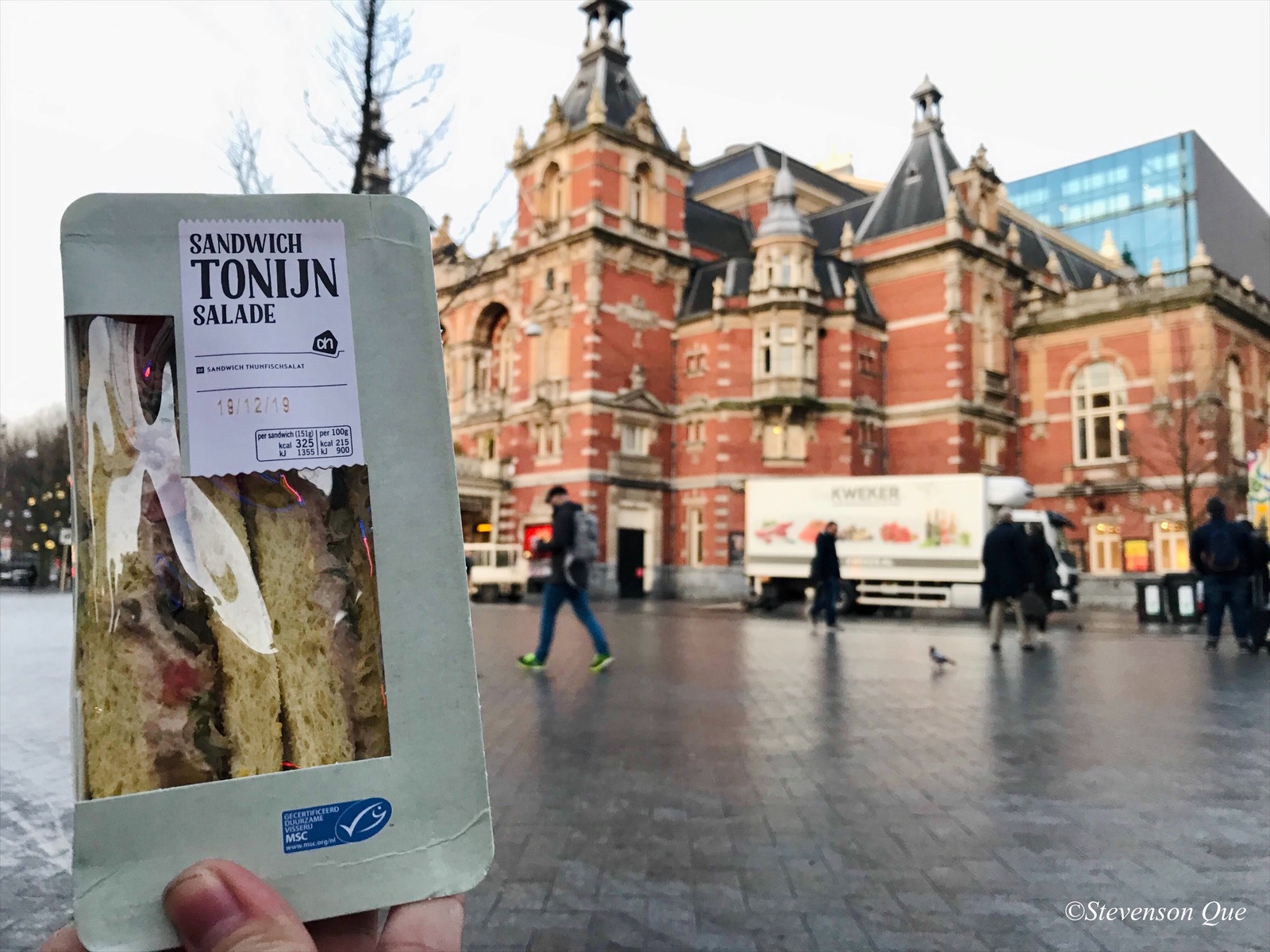 Tuna Sandwich for Breakfast (€ 3.00)
From Leidesplein, I took the Tram 2 going all the way to Amsterdam Centraal, the city's main train station that connects Amsterdam to major cities not just in the Netherlands but to Europe's interconnected rail system. Since I will be staying at Amsterdam for two full days, I purchased a 48 hour public transport ticket that entitled me for unlimited tram, bus, and metro lines around Amsterdam (do note that some buses that goes outside of Amsterdam are not included on this ride all you can fare so better check if the bus you are riding is included).
The tourist tickets are available in 24-hour or multi-day tickets (2-7days) on the GVB Website and ticket offices. For more information, you can visit the GVB Tourist Tickets Page. With its unlimited rides, I can really say that this is a very good deal. I just paid €13.50 (Php 763.00) to purchase the  GVB 48-Hour ticket at the bookstore in Sloterdijk Station once I arrived in Amsterdam and rode the Tram 19 to Leidesplein at ease. Hour counter starts at the first time you tapped your card.
Now let's go back to our walking tour! First stop, Amsterdam Centraal. 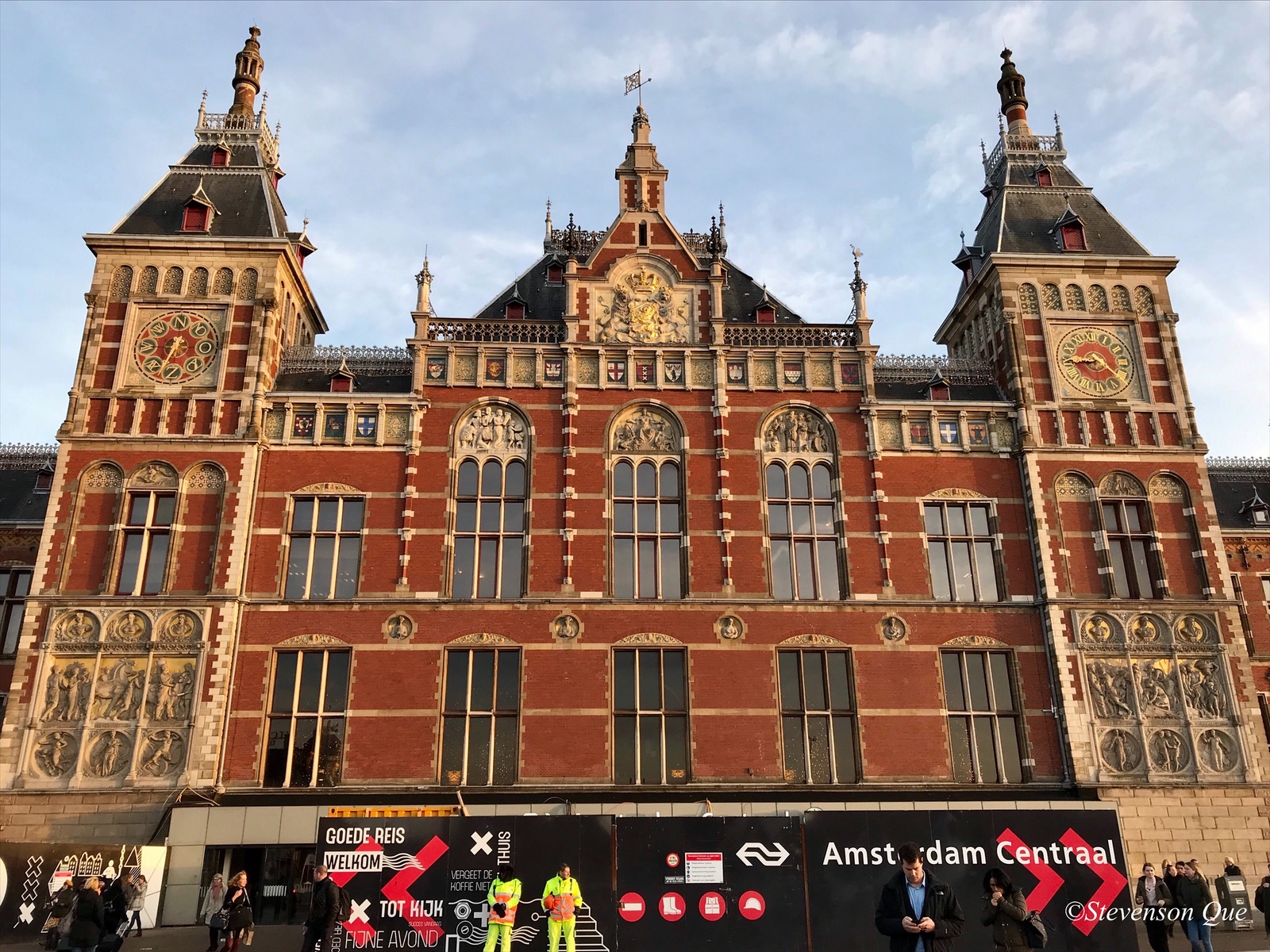 Amsterdam Centraal
The last and first stop of Tram 2 is at Amsterdam Centraal. This is the largest railway station in Amsterdam and serves a lot of cities not just in the Netherlands but also has direct links to other western European countries. Aside from being the second busiest transport station in the country (Utrecht ranks first), it is also the most visited Rijksmonument which is a list of Dutch heritage sites.
To be honest it was funny when I went inside because I thought that only those with the train ticket can access the place but I found out through the cleaning guy (Thank You Sir) that there is a passageway at the middle lined with fragrant shops that goes to the back where most of the buses are located. Also, if you wish to use the restroom, there is a pay restroom at the backside of the station (€0.70). Yes, it is quite costly to poop or pee in Amsterdam, not much free public restrooms. 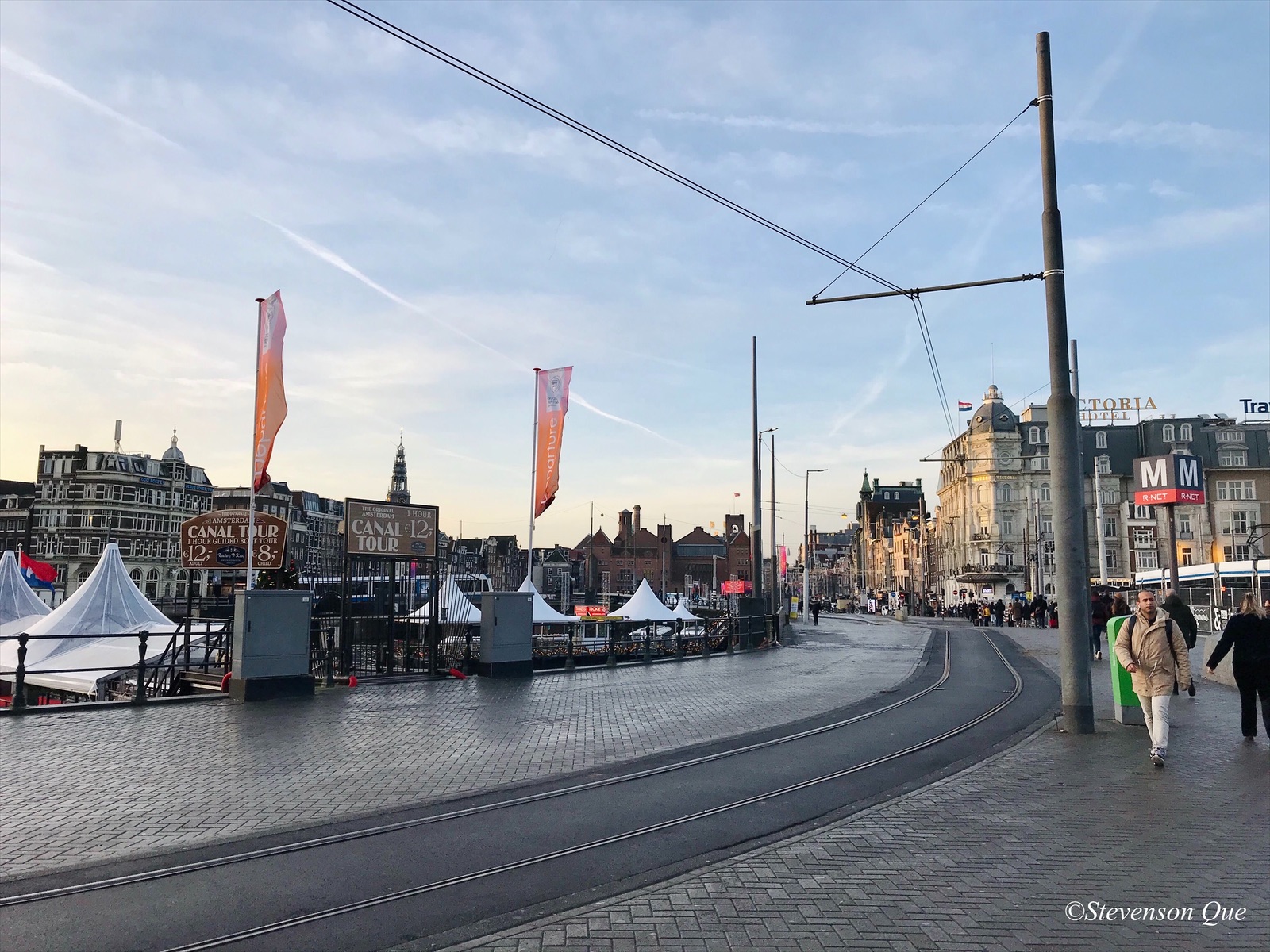 Damrak
From Amsterdam Centraal, walk southeast through the famous avenue Damrak. This may just be just a simple street with neatly laid cobblestones divided by tram tracks but I'm telling you, this part of Amsterdam has some great scenic spots to take that tourist portrait of Amsterdam.
Below is a photo I asked a dutch guy on the street to take of me. Those beautiful dutch residential towers looks so peaceful and strong above the quiet canals of the city. This part of the city is also a good jump-off point if you wish to take the canal cruises and see the city from a different perspective! Quite romantic, I'm sure. Maybe on my next visit. 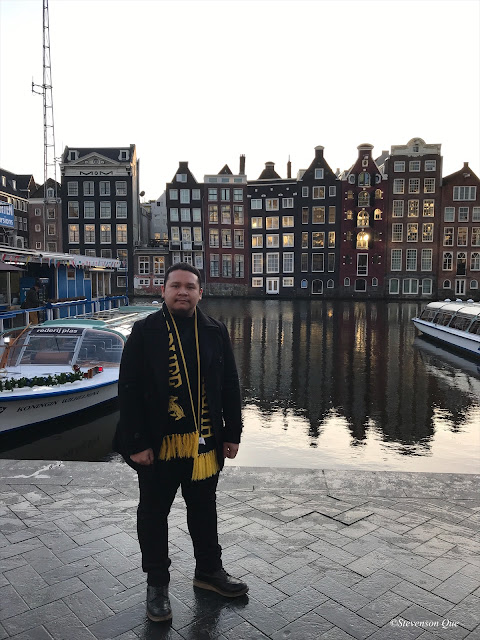 Steve at Damrak
Walking along Damrak was an experience. That morning at around 10:30am, I can see the city beginning to wake up. Bicycles cruising, bistro doors opening, and locals leisurely walking to their workplaces. This city is just so laidback, not just because businesses open so late at 11 am, but mainly because you can see it in the way they move. Of all the European cities I have visited on my winter trip, I can say that Amsterdam is one of the friendliest, locals are not very frugal with smiles.
Continue walking south until the road starts to widen. 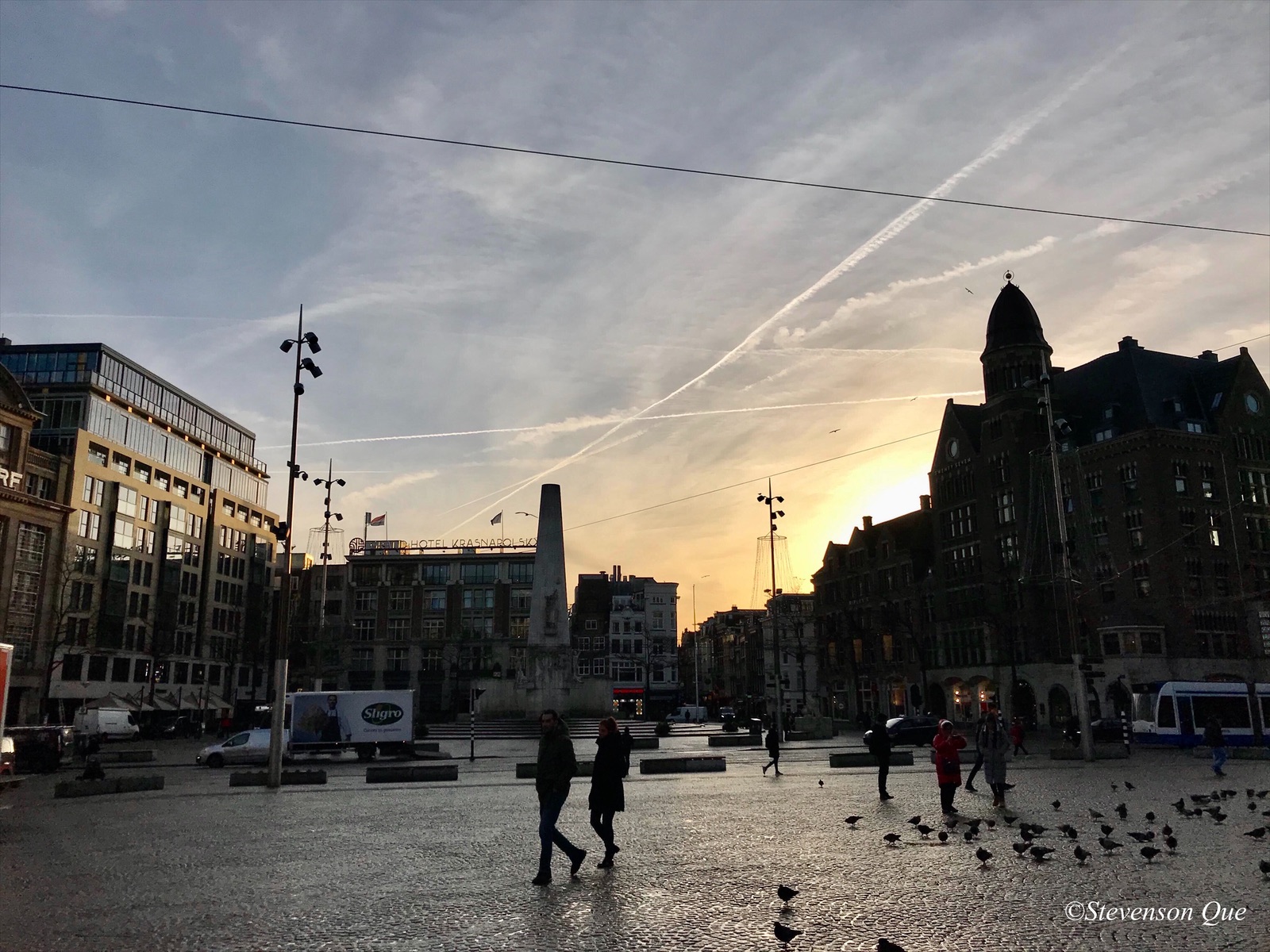 Dam Square facing the National Monument
Another important place in the city is Dam Square. It's not really square in shape but this part links Damrak to the other street called Rokin. And yes, the name is derived from what this part of the city really was, a dam on the Amstel river. Which I think also is where the name Amsterdam is being derived.
Across the town square's open space is the National Monument that was erected at 1965 to commemorate the sad happenings and victims of the second world war. You can see the National Monument on the photo above. 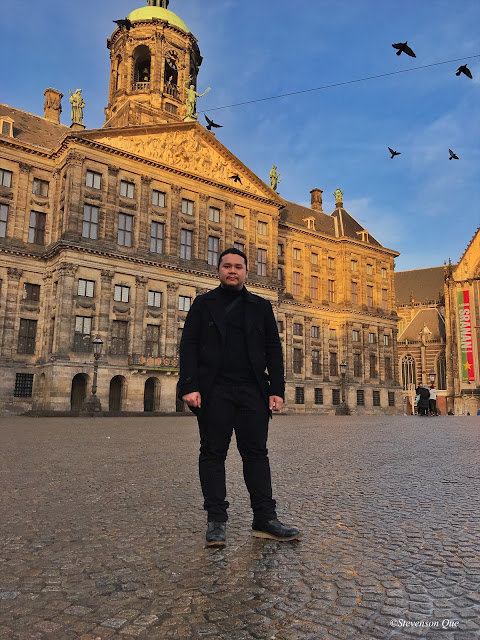 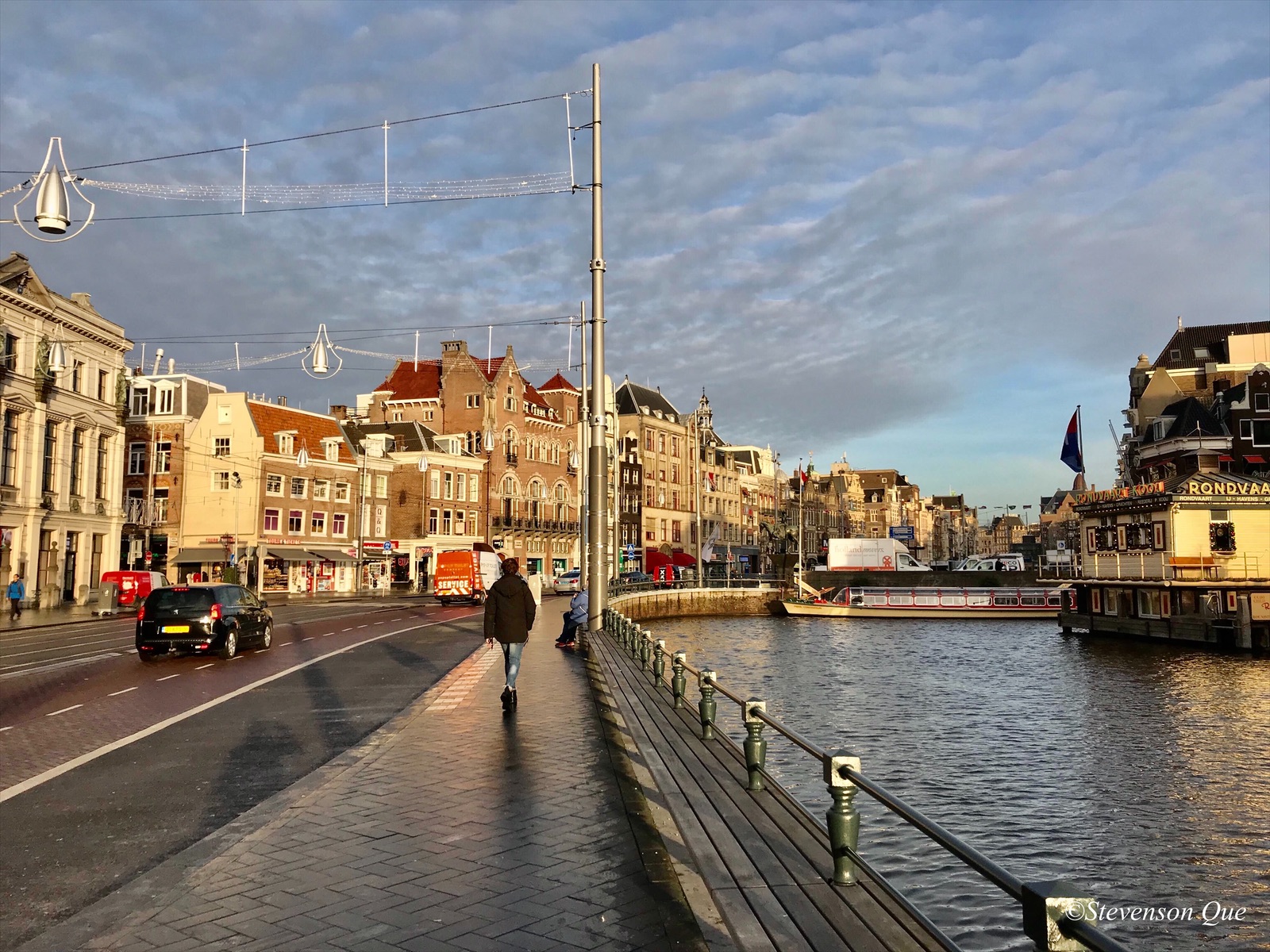 Rokin Street
Once you passed by Dam square, that is also where Damrak ends and the next street begins, Rokin Street. Another important street that stretches all the way south and passes by hotels and attractions such as Amsterdam's Madame Tussaud's and another global chain, The Dungeon.

The street stretches and part of it will lead you to an open canal on the left side if you are walking south, another picturesque spot which I thought was truly unforgettable. This is when the sun started to really shine and greet me good morning (although it was close to noontime already). And since I was close to the waters while I walk, it was extra colder than the 6 degrees Celsius that was noted on the weather app. 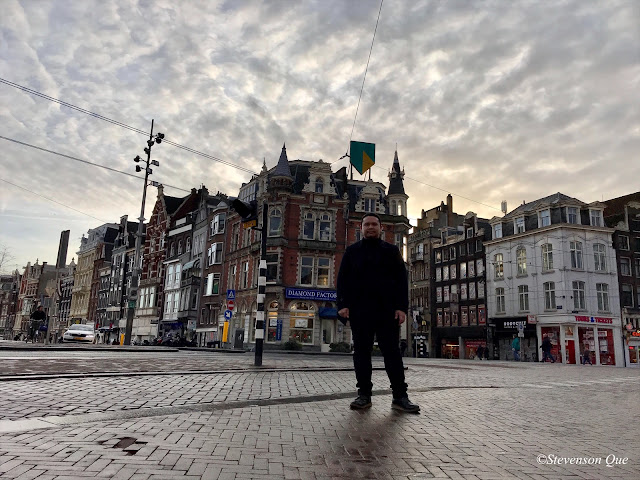 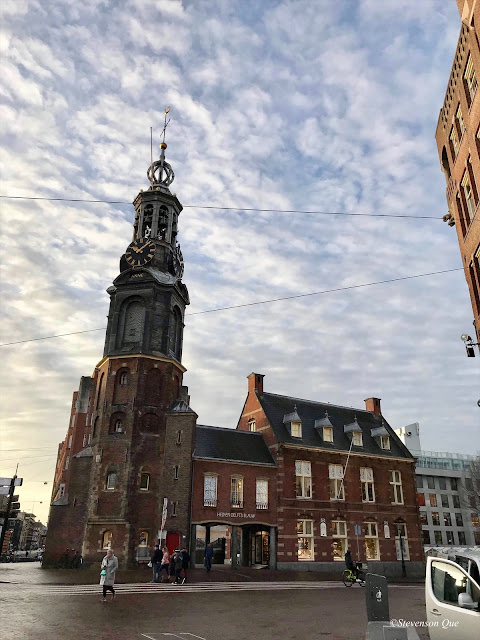 Muntplein and Munttoren
Literally, "Mint Square", Muntplein is another important square located at the heart of the city. Rokin street passes by this important spot which is actually a bridge and Amsterdam's widest bridge. It is in fact named after the Munttoren tower, right photo above, which is a tower with a carillon above that plays music through its medieval bells.

Walking further will lead you to more shops and also to the flower market district which was sleepy since my visit was in the middle of winter. But do not fret, the views are still spectacular without the leafy foliage of trees and gives you a full view of the canals and the buildings that line up its banks. 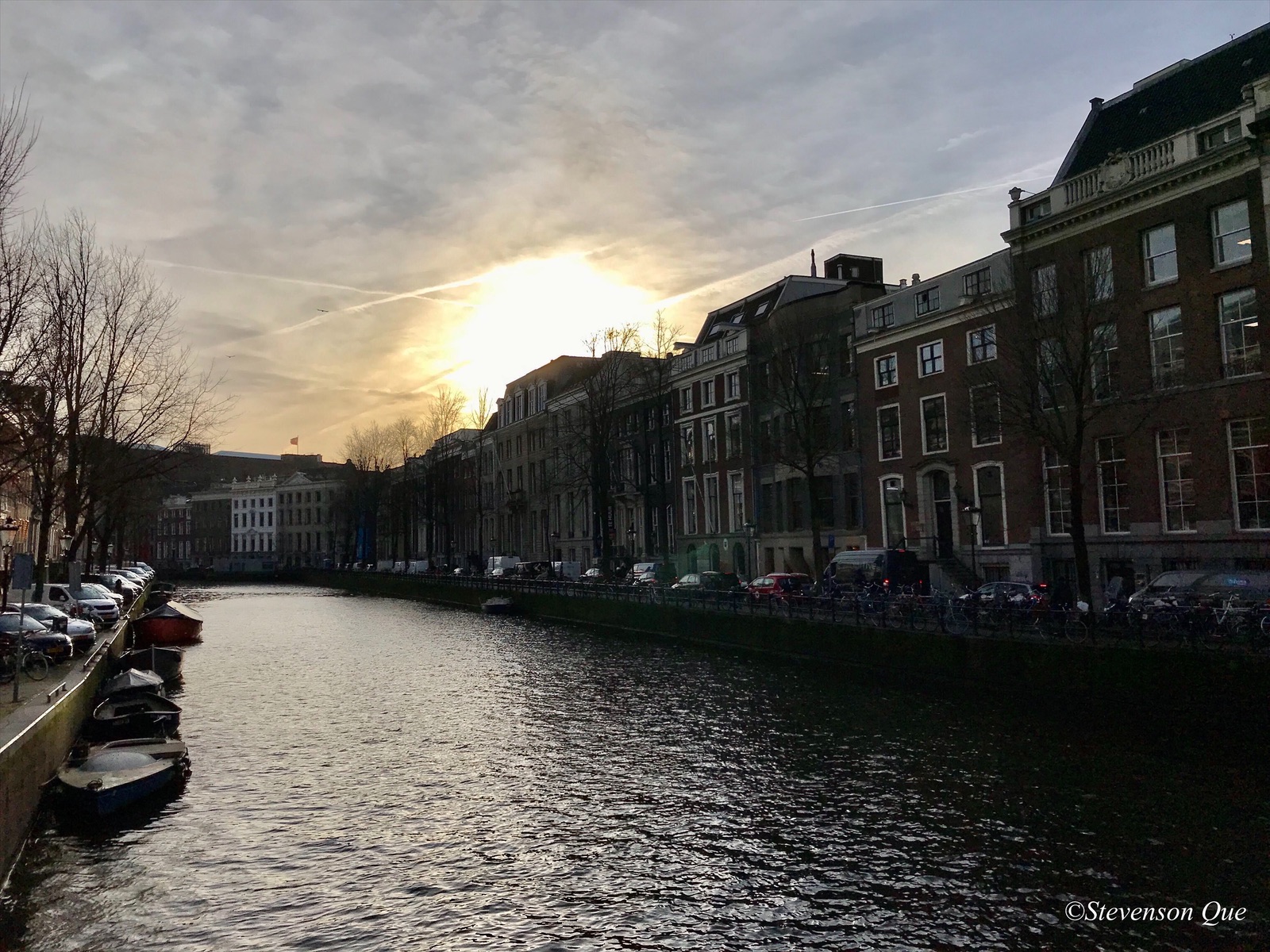 A canal at Amsterdam
If you head east of Muntplein, Amsterdam's red light district is a walk along it. But since I'm not very much in the mood for something naughty especially I was alone that  afternoon, I decided to just spend the next hour waiting for my museum tour time. Time to visit and commemorate Amsterdam's most famous citizen, Anne Frank. 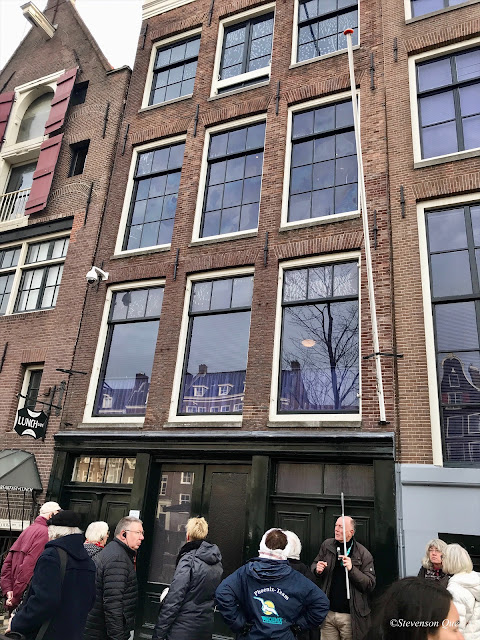 Anne Frank is an immigrant from Germany who fled with her family all the way to Netherlands to escape the claws of Nazi Germany. Being jews, they were forced to go on hiding in the hopes of staying alive before the day of liberation comes after the world war. Here in Amsterdam was her home and also their hiding place, Prinsengracht 263, Amsterdam. A museum has been built in memory of her, right in the very place where their hiding place still stands and can be visited by people worldwide. 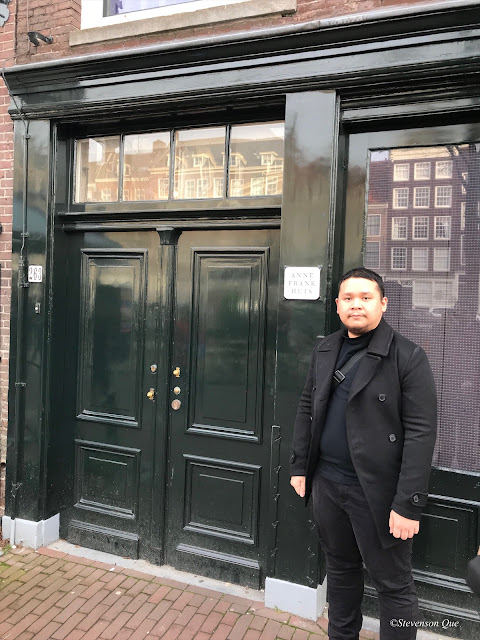 Prinsengracht 263
To get there from Muntplein, walk 300 meters to Koningsplein, take the Tram 2 towards Amsterdam Centraal and hop off at Dam and board Tram 17 towards Osdorp Dijkgraafplein and get off at Westermarkt (These Tram lines are included if you purchase the GVB ride-all-you-can tickets).

The only way to enter the Anne Frank Huis or Ann Frank House museum is through tickets that are purchased online. I got mine from the Anne Frank House Website a month in advanced because the tickets ran out fast. Time slots are given so you have to plan your trip in advanced to get the perfect time that you will enter the museum. Tickets are priced at €10 per person with a €0.50 online payment charge. Aside from this entrance fee, you can also join a special introductory class (which I am very thankful I took). For just for an extra payment of €5, you will be part of a special lecture class which takes about 40 minutes and will give you an introduction to the Museum and of Anne, and also some unseen information. 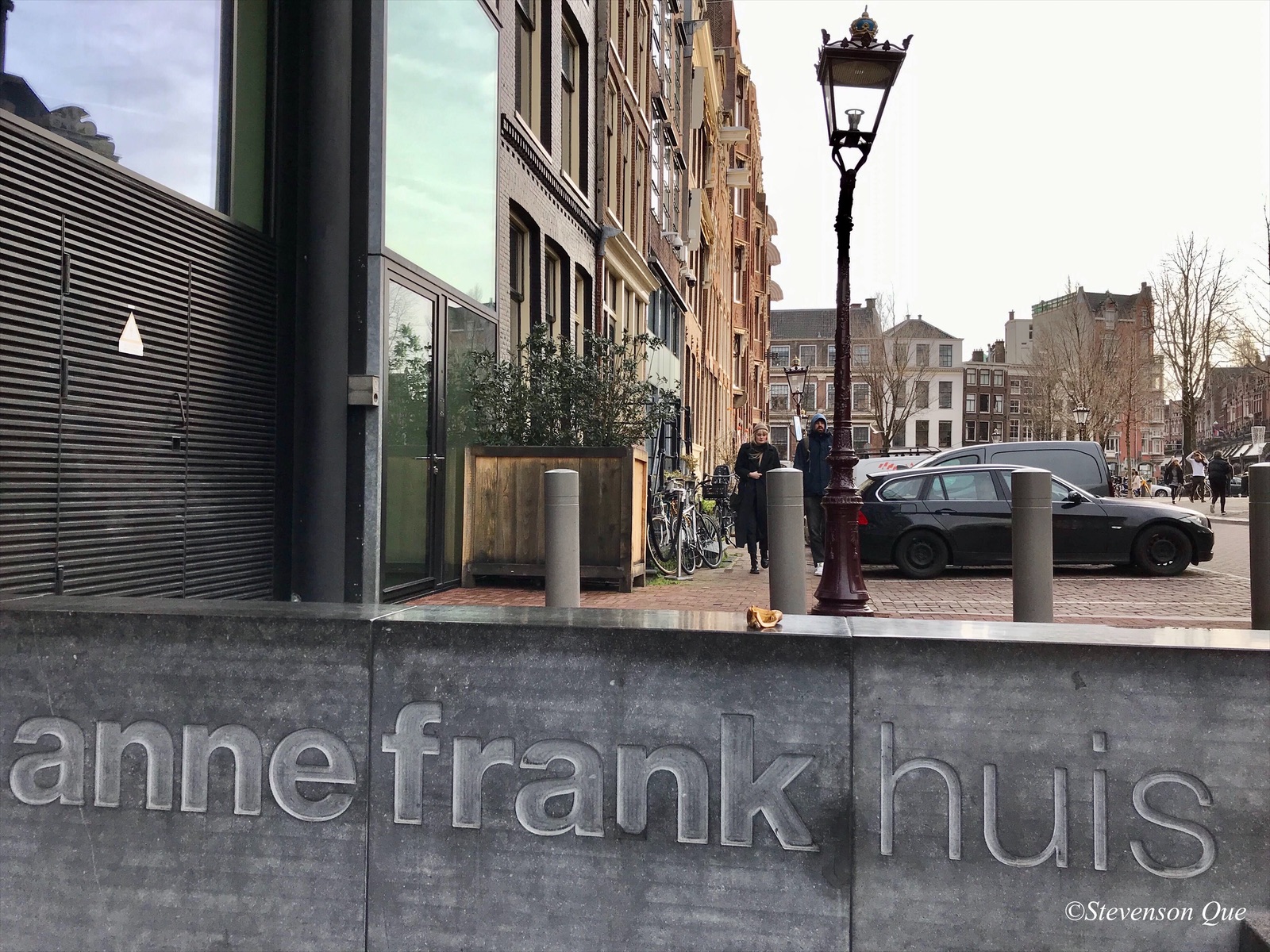 Anne Frank Museum
Do note that the entrance to the Anne Frank Museum is not located at the main door of the hiding place (Prinsengracht 263) but at the corner of the block just behind the Westerkerk Church. Having read about Anne Frank and her life, it was a very solemn and moving moment for me to be in that very place where they hid for two long years. A lot of artifacts are there including photographs of the people who hid with them and the pure hearts who helped them in their hiding. It took me about 2 hours to complete the whole museum and it also has a souvenir and cafe that you can spend more time at while you reflect on Anne's life.
Amsterdam is quite a small city, not to the point that it's boring because there's just so much to see every step of your trip! It's one of my favorite cities not just because of its beauty and distinct character, but also because it is very traveler friendly to the point that you can get around on your own without sweat.
Below is a step by step Google Map I made of this walking itinerary that you may find useful.
Amsterdam is colorful yet firm, rich yet with a heart, strong yet flexible. Canals divided the city into portions but the soul of the Dutch is as strong as they stood together. After a life of wanting to see it, I feel really blessed to be under Amsterdam's embrace. It waited for me, it waits for you too! 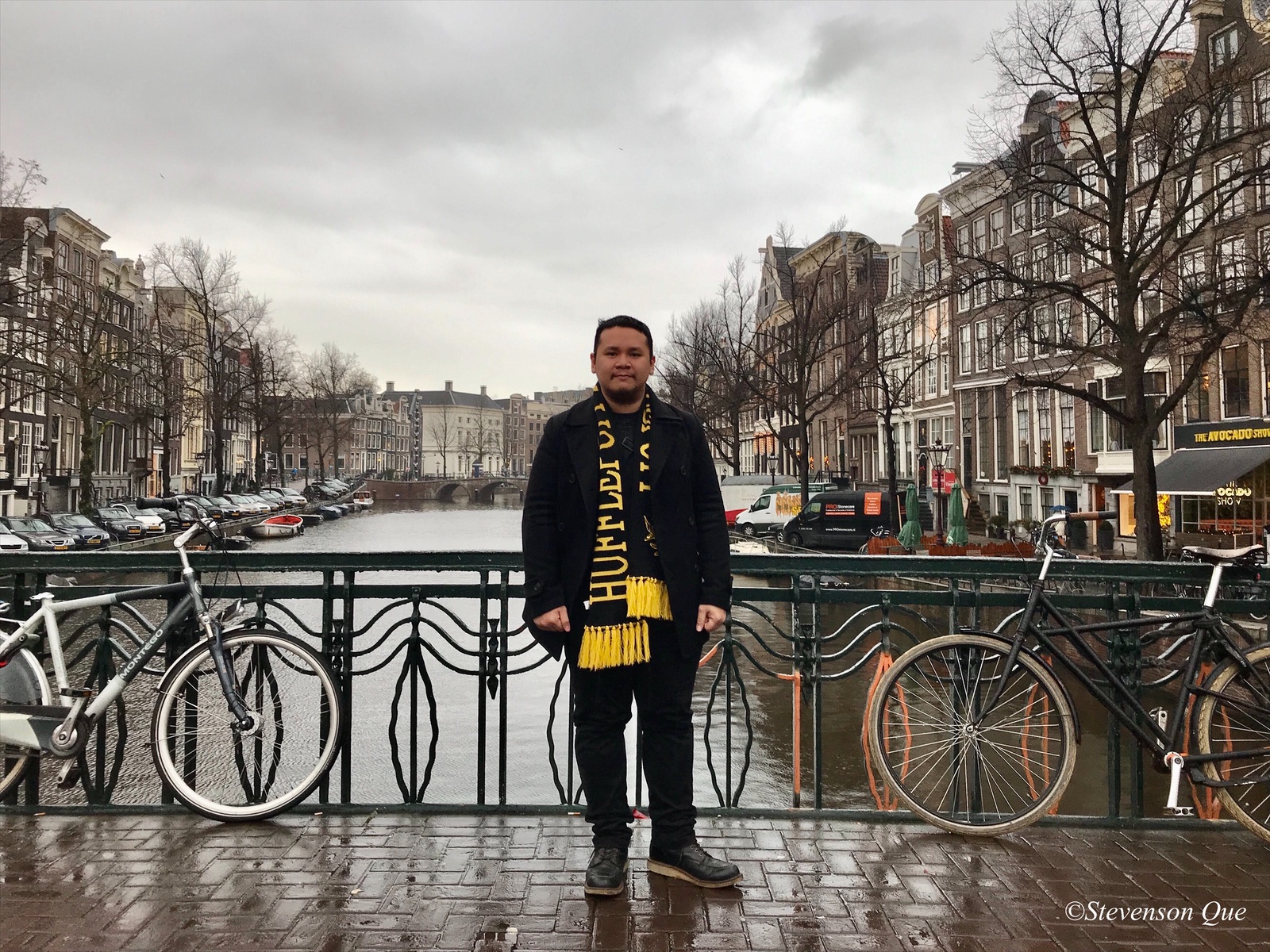 Never give up on waiting!
Steve
This post is part of Skywatch Friday that features different views of the sky around the world. Visit Skywatch and go on tour around the globe seeing sunrises, sunsets and so much more than the sky that you know at http://skyley.blogspot.in/