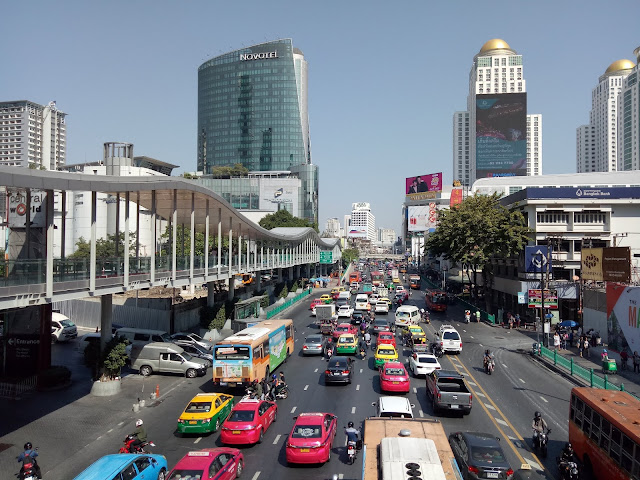 
Probably one of the most visited cities in Asia, Bangkok offers a lot of things to travelers from all over the world. One thing that I admire about this city is its well planned and placed Metro stations that enables tourists like me to reach a large number of attractions and shops faster and at ease. So one late morning, I decided to not plan on anything and just see what the city has to offer.

I purchased a BTS One-Day Pass that lets me have unlimited rides on the BTS system for just 140 Baht (Php 233). I was so happy that day because I was able to see most of the city with just a little more than 200 pesos! So I did my self-guided tour by visiting spots that are within the BTS Train Stations. Click on this link to know more about BTS One-Day Pass. 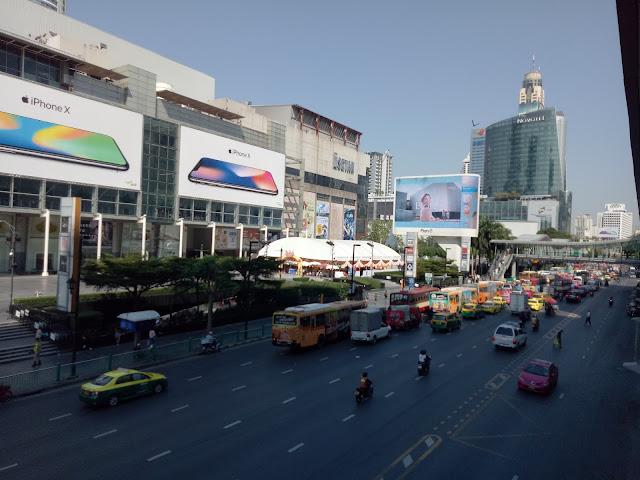 
One can reach and visit one of Bangkok's biggest malls, Central World, by riding all the way to the heart of the city. You can exit either by Siam Station or through Chit Lom Station to reach this area. As you can see on the photo, it is still the iPhone X posted on billboards because I was there at January 2018. 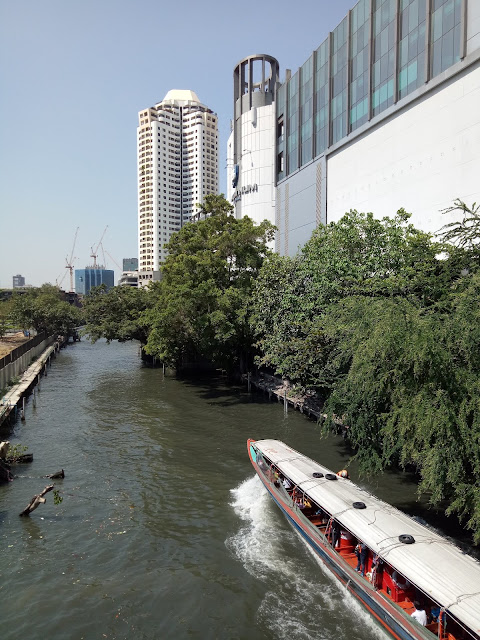 Walking along the overpass along Ratchadamri Road, I passed by this beautiful river where water taxis are passing through. This river is called the Khlong Saen Saep which is a very important canal that has been used by the Thai people dating back centuries ago to transport people and goods as well. 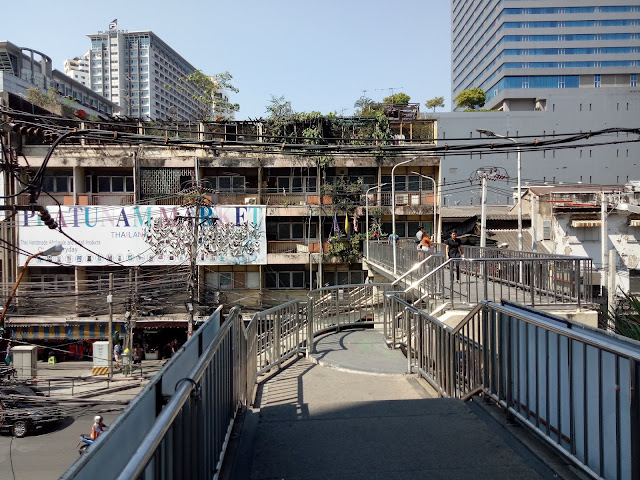 An overpass by the Pratunam Market

Pratunam Market is also reachable by foot from the stations Chit Lom and Siam. It's not that near though but for afternoons like mine, it was a good stroll for me. Pratunam is famous for its cheap selections including clothes and cute trinkets and souvenirs. I got my Dad and my brother some pasalubong (travel gifts) from here and they were very happy.

After buying stuff at Pratunam, I made my way back to Siam Station by foot and headed back to Central World to see what's inside the mall and yes, to cool myself down from the hot and humid Bangkok afternoon. Aside from shops and restaurants, I was able to find a few interesting things inside this mall. 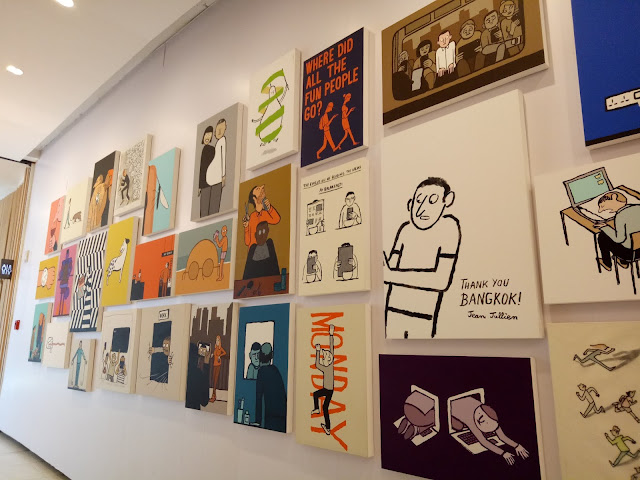 One of the walkways inside the mall was turned into an art gallery. I am not very sure if it is a usual place for such art exhibits or I was just very lucky that day to see these beautiful pop art posted for the public eye.

Then it was time to get back to the train and on to my next stop, Victory Monument Station. This is one of the most interesting legs of the BTS tracks which I will elaborate later. But for now, Let me give you a little history of what is the Victory Monument and why it is important for Thai People. 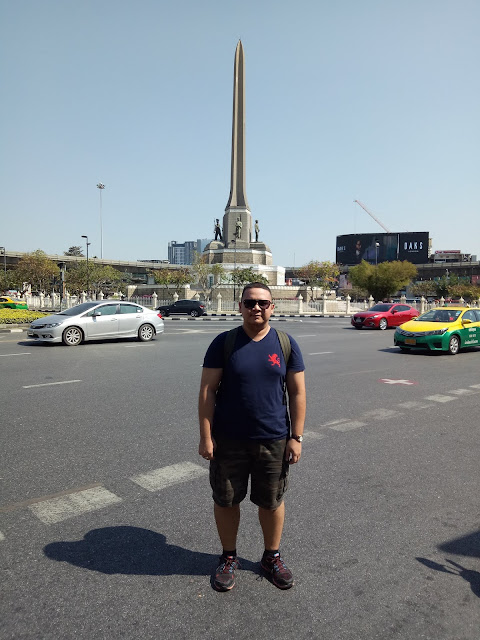 Victory Monument is a landmark in the heart of Bangkok which features an obelisk with several statues around it. It is a remembrance of Thailand's victory over the Thai-Franco War that happened between October 1940 to May 1941. It is a reminder of the victory of the Thai people against the French forces that led the Thai Kingdom to expand to several areas in Cambodia and Laos. It is erected last 1942 and is now located at the intersection between Phaya Thai, Phahonyothin, and Ratchawithi Roads.

I would like to thank the very kind policemen who saw me struggling for a selfie. One of them offered to take a decent photo of me with the Monument at my back. Thank you so much and also for holding my two litter drinking water. (that afternoon was really hot) 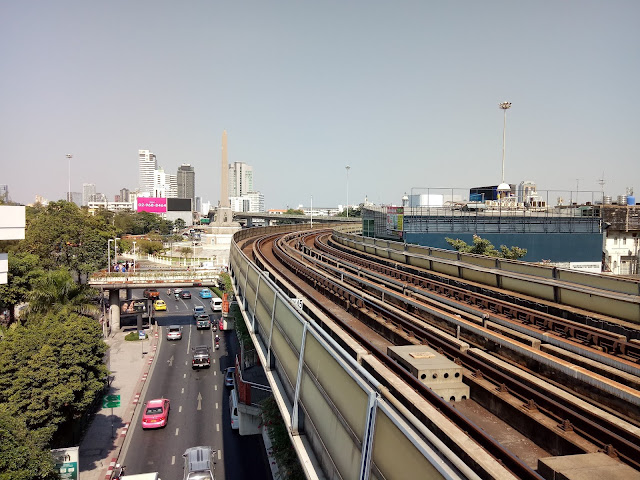 As I have mentioned above, this leg of the BTS tracks are probably one of the most interesting. You have to hold on the handrails if you are standing because it literally went around the victory monument and gives you a beautiful almost 360 degree view of the landmark. It was a very beautiful moment and goes to show how important for the Thai people this monument is that it went all around it so that it can retain it's place at its center. 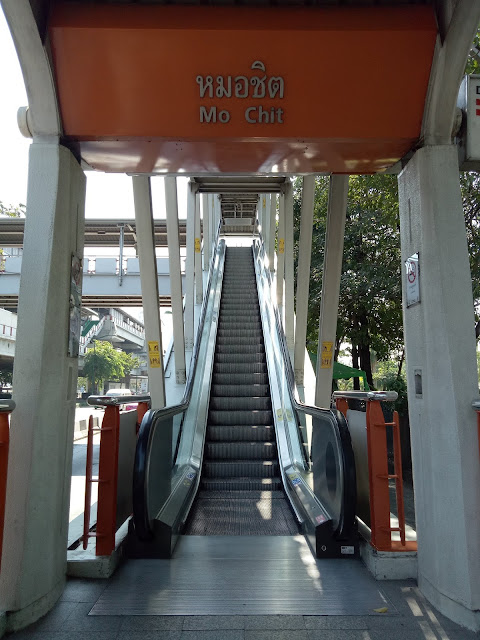 Mo Chit Station was my last stop that afternoon. It is the farthest station at the North Route of BTS (as of now because construction is on going to expand up to Khu Khot). This station is well known not just because it is the last but because it is the station to exit if you wish to visit the biggest night markets in Bangkok, the Chatuchak Weekend Market. But since it was a weekday, I have decided to just visit and stroll the beautiful park just below the station, Chatuchak Park. 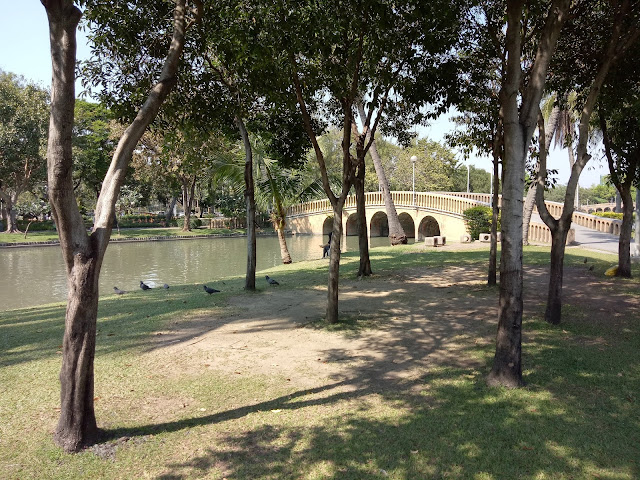 Chatuchak Park is located at an area donated by the State Railway of Thailand and was built during the late 70s. It is a beautiful place at the middle of the hustle and bustle of Bangkok where you can take a break and press pause on your busy day. Though it was hot that day (okay I know I've said it so much but REALLY it was hot) all the trees and the lagoon gave me a fresh feeling, at least for my eyes. 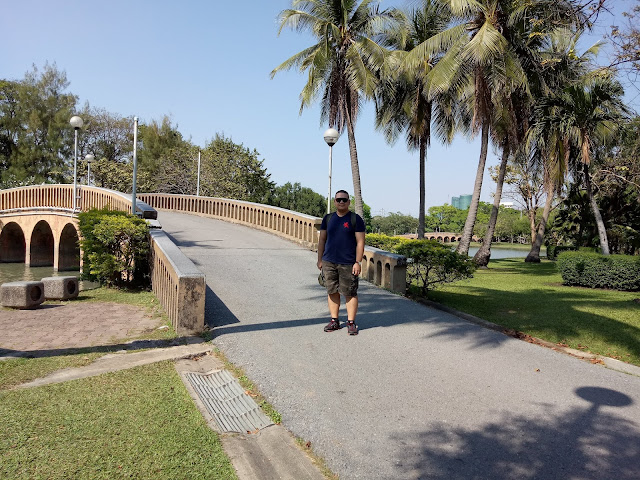 A kind lady took this photo of me at Chatuchak Park

Solo Travel Tip: I know we tend to get a little shy whenever we ask strangers for a photo, but believe me you'll get through it. And when you do, if you want better photos taken, look for students and younger people, or better yet other tourists that have cameras on their necks (that's quite usual on touristy cities) to take your photo. Promise, you'll never regret the quality of their photos. Mine above was a bit far HAHA but hey, I can still crop it if I want to, important thing is that it's clear.

Aside from the fact that it is free, another metro line, the Bnagkok MRT has a station just below the park which is named after the park as well, Chatuchak Park MRT Station. Chatuchak was amazing and I was able to experience it on another day that week so hopefully I can write about it soon. But yes, if you wish to go shopping and get lost in the middle of markets, markets, markets, Chatuchak is a must. 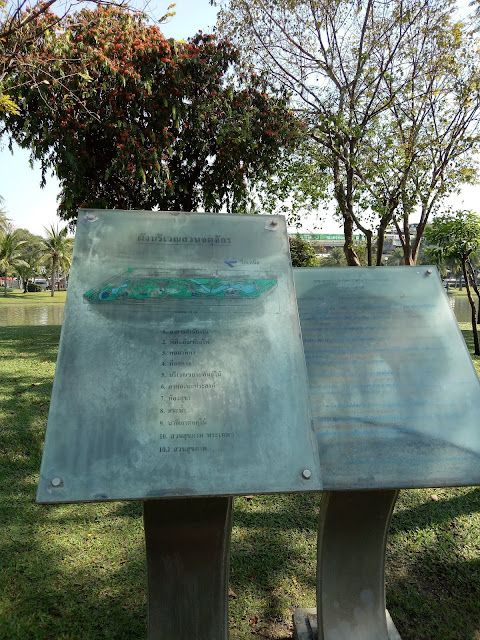 Bangkok will always have a special place in my heart. Mainly because of its people who are always willing to give you their smiles for free. With my experience of travel around South East Asia, I must say that Thai people looks so much most like us Filipinos. They would even talk to me straight in Thai and when I politely inform them that I am not Thai, they easily recognize me that I am a Filipino maybe because of the way we speak English. And yes, they would even shout Manny Paquiao's Name once they knew I am Filipino HAHA! 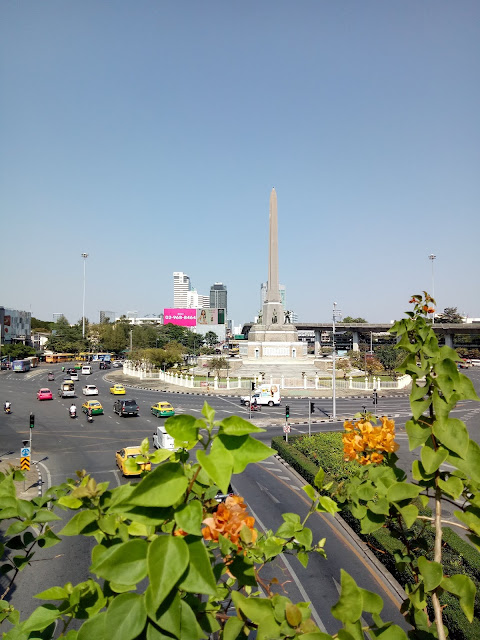 Clear Blue Skies on that Summer Day in Bangkok

So what now? Book that flight to Thailand! If I can make it with just a BTS One-Day Pass, then so can you! I love Thailand, sure you will!