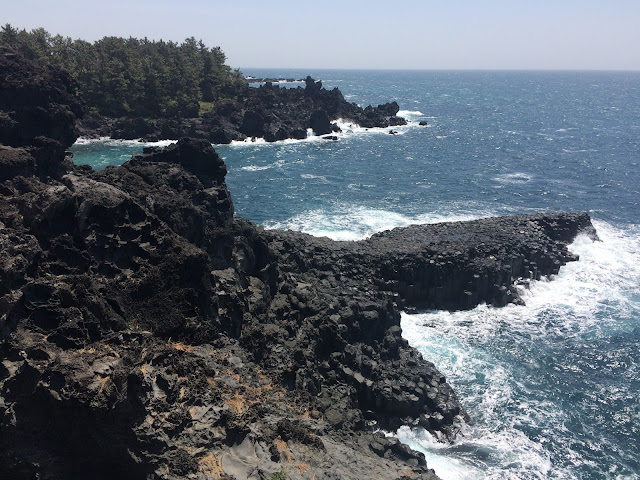 Every time we watch a Korean drama or series, we usally hear this place-Jeju, Jeju Island, Jeju Do-it all refers to the paradise nestled across the southeastern tip of the Korean Peninsula. Boasting with the most beautiful and spectacular jewels of nature, the whole island has been hailed as one of the New7Wonders of Nature. But how do we get there in the first place?

For us though, we chose to get round trip tickets to Seoul via Jeju Air, and then round trip tickets from Seoul to Jeju via T'way Air. There is an Airport transfer though from Incheon International Airport (where we arrived from Manila) to Gimpo International Airport which is also in the Seoul Metro (where we will be leaving to Jeju Island). Most Domestic flights from Seoul are served in Gimpo Airport than on Incheon where most international flights are hubbed. 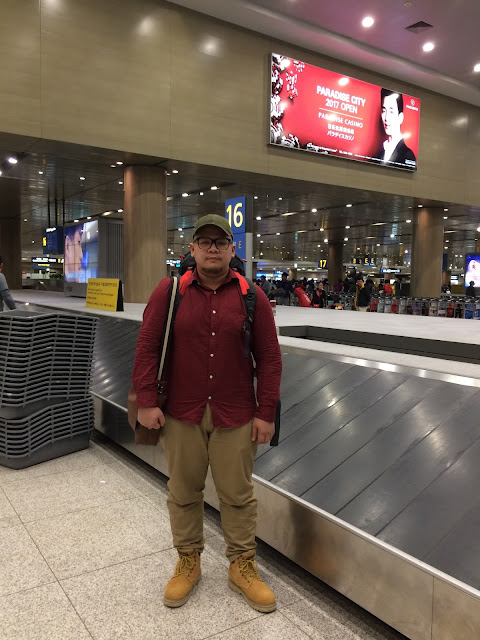 We left Manila at 11:50pm and arrived at Incheon International Airport at 4:50am Seoul Time via Jeju Air Flight 7C 2306. Seoul is an hour ahead of Manila so the flight is just about 4 hours. The Immigration lines are not very long at the time of our arrival since most of the passengers on the flight are Korean Nationals so we had the foreigner lines only to ourselves and about 10 other Filipinos.

After immigration, we grabbed our luggages and proceeded to the Airport Halls. We had to get our WiFi Eggs at the KT WiFi Stations. We rented a Wifi Egg for 7 days (Monday to Sunday) for a very affordable price! Since I was travelling with my brother and my cousin we rented just one router since it can accommodate up to three devices with unlimited data for each. There is a deposit fee of 20,000 KWN on top of the rental fee though, but if you have a valid international credit card, you can just have it swiped and you don't have to pay the 20,000 deposit. This is their way of ensuring the devise if something happens to it or if you ever lost it. By the time you return it before you leave, the deposit will be handed back to you. For more information on KT WiFi Eggs, click on this link: KT WiFi Router Rental Service

We then got out of the Airport Building and into the chute towards the AREX Train Station. Do take note that it is best to ride the "All Stop Train" and not the Express because the Express shoots directly to Seoul Station. Gimpo International Airport Station is our bound so we bought three one-way tickets priced at 3,750 KWN. We purchased a SINGLE JOURNEY Ticket that has a 500 deposit which then can be refunded once you arrive at Gimpo. 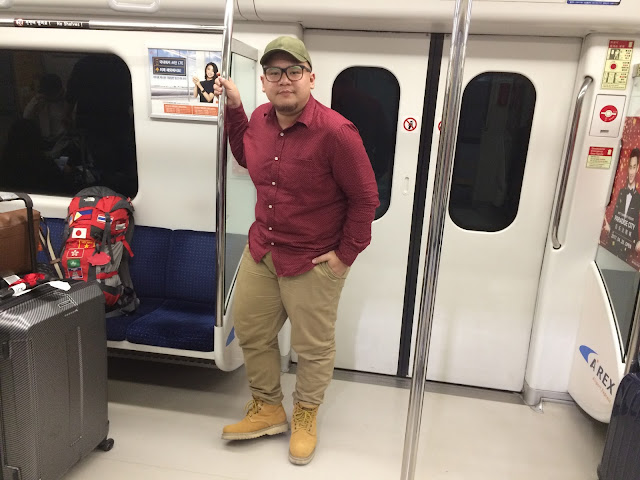 Gimpo International Airport is 7 stations away from Incheon International by the All-Stop Train. We left Incheon around past 6 am and the train ride was about 21 minutes long. Through this ride, I got to see my first sights of this awesome country and yes, there still are Cherry Blossoms that bloomed late since we arrived mid-April. Oh those trees looked like paintings on the beautiful green and concrete cityscape.
What I love about these Asian Megacities is that their airports are connected to their metro trains by an airport railway system. I remember that they also have this services during my visits to Bangkok and Kuala Lumpur. 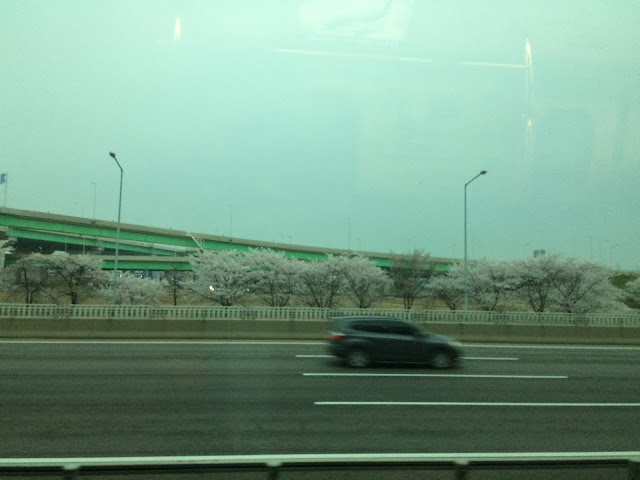 Gimpo International Airport is located at the northwestern part of South Korea, just a few miles away rom North Korean borders. It houses most of South Korean domestic flights and a few international flights from nearby countries such as China and Japan. Flights that are bound to Jeju are hubbed here including big carriers such as Korean Air and Asiana Airlines. There are other low cost carriers that services from Gimpo Airport, some of them are Jeju Air (which we boarded our Manila to Incheon Flight), JinAir, and the ones we will be flying with to the magical island of Jeju, T'Way Air.

NOTE: We got our round trip tickets from Gimpo International Airport to Jeju International Airport via Skyscanner.com. It was quite cheap because we got our tickets for roughly Php5,100 pesos with 15-kilo check-in baggage allowance on both ways.There are a number of cheap low-cost carrier tickets that you can purchase through the search site but we chose T'way so we can try a new airline but Jeju Air flies GMP-CJU several times a day as well.

We arrived at Gimpo International at around 6:45 am and walked all the way the chute from the train station to the Airport Building. there's a very long Walkalator which makes it faster for us to get to the baggage check in stations. Gimpo Aiprport is old but it is being rehabilitated and redesigned when we got there and signages indicate that the rehabilitation will be completed by 2018.

Check in counters in Korea open about 1 hour and 30 minutes before the flight so we were quite early and we sat first as we wait for the time it opens. As we did, there is a gate nearby that we pass by to get outside and breathe in some fresh air, my lungs' very first South Korean air. 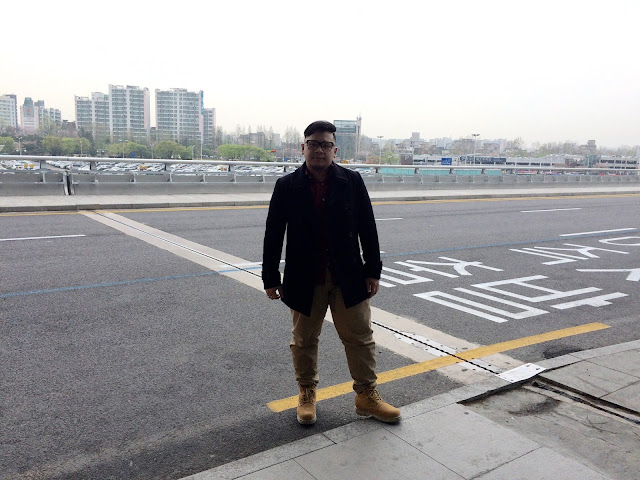 Me and the reason why I went to Korea, my Black Coat

We were called to check in our bags around 8:15 am. We were quite tired but the excitement never ever wavered. We are flying to Jeju International via T'Way Air Flight TW 705 that leaves Gimpo at 9:45 in the morning. We were then prompted to go to the boarding gates  at about 8:30 am but yes, the Gates aren't open until 9:30 am!

South Korean Carriers usually open their gates 15 minutes before the Flight! I don't really understand this concept because how can you ever make all the passengers board and setup and do all the necessary flight preparations in just 15 minutes! But hey, I don't own any airplane so we just go with the flow, with the flight I meant. 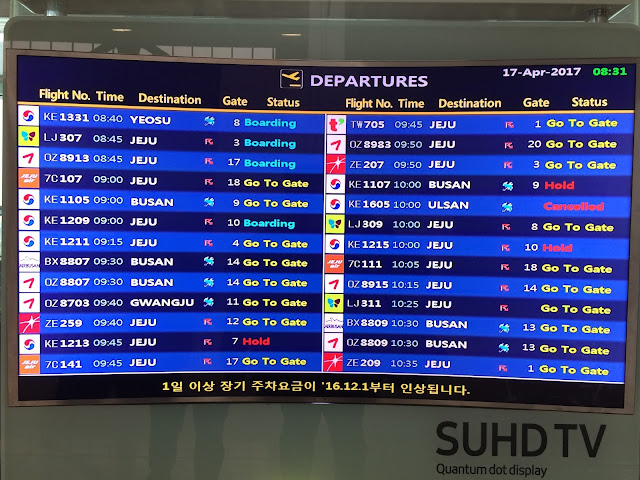 We boarded and the check-in lady was so nice to place us in the front rows of the plane. The flight was a little bumpy to be honest but maybe I was too tired to even feel scared HAHA but yes, we did land safe and sound to Jeju International Airport.

The sights even from the plane window gives me a feeling of Hawai'i, both tropical and temperate and seas are bluer than blue. After baggage claim and a few pictures, we arrived at one of the New 7 Wonders of Nature, Jeju Island! Their airport is also cool with trees native to Jeju, planted along as landscape designs, including a few Jeju Tangerine Trees that are known from this beautiful place. 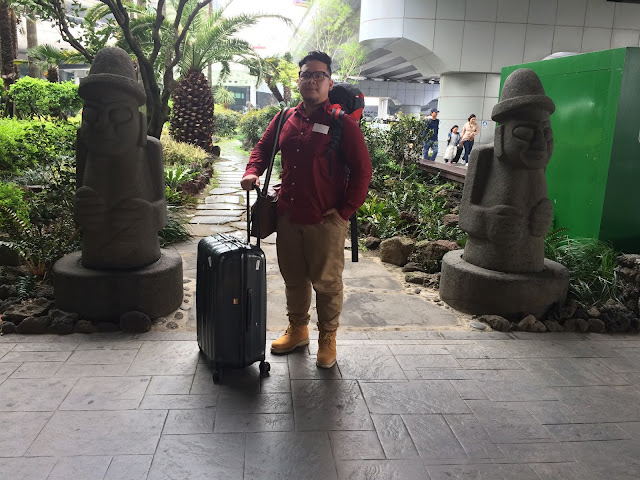 Me standing at a pair of Dol Hareubang, jeju Island's Iconic Statues

From Jeju Airport, we rode a taxi that took us directly to the southern regions of the Island. Jeju is not a very small island and the famous Mount Halla is located in the very middle of this land mass. We hired what they call a "Jumbo Taxi" sincwe our luggages were quite huge since we have all our things and supplies for 7 whole days. It took us an hours drive from the Northern coast of Jeju City to the southern seaside city of Seogwipo where we will be staying for 3 days and 2 nights.

We stayed at Days Hotel Seogwipo Ocean. It was a fairly new hotel, opened just less than a year when we stayed there last April 2017. The staff are accommodating and was fast enough to process our check-in which is very important for us since we just got there from three connections from Manila to Incheon to Gimpo to Jeju and an hour drive from the airport. Click the link to read the rest of my review of Days Hotel Jeju Seogwipo Ocean. 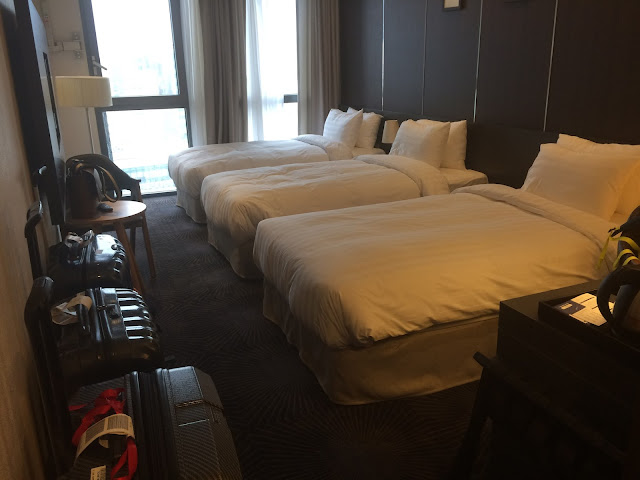 The room is complete and cozy and even the bathroom was not crammed. The beddings are so comfortable to sleep at but the air-conditioning system was a little confusing for us to operate so we just opened our windows. It was raining the time we arrived but it did stop just before the night came.

It was a quiet sea-side city where you can even see a glimpse of the beautiful coast from our hotel windows. This part of the island does remind me of my days in downtown San Francisco but a lot more peaceful than my most favorite city in the world. 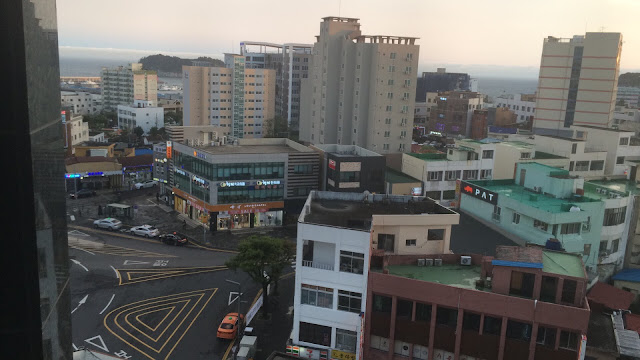 There you have it! That concludes the first part of my South Korean Adventure. Jeju is a wonderland and I am just so excited to share with you the places that we have visited throughout this beautiful island. No wonder this is a famous spot not just for travellers but also as a setting for big Korean Drama Shows and Movies. It is very colorful and in every part of this place, every sight you see, every scent you smell, and even on the sounds that you will here, there's that spirit of untouched nature that lives perfectly with its locals.

For now I leave you with some of these photographs from what I call the place where nature is the main citizen, Jeju. Stay tuned for my next posts about my Springtime adventure on this multi-part South Korean Series. South Korea, especially Jeju was just another of my dreams, but hey, I have pictures so I guess it came true :) 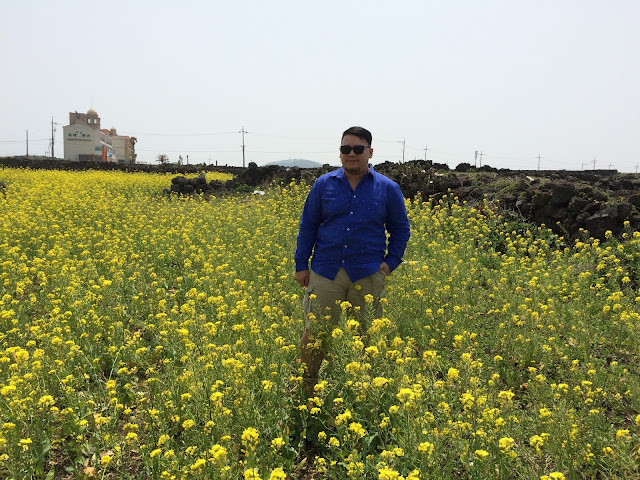 Me in the Canola Fields of Udo My cousin Judy on the rolling hills at Springtime Seongsan Ilchulbong 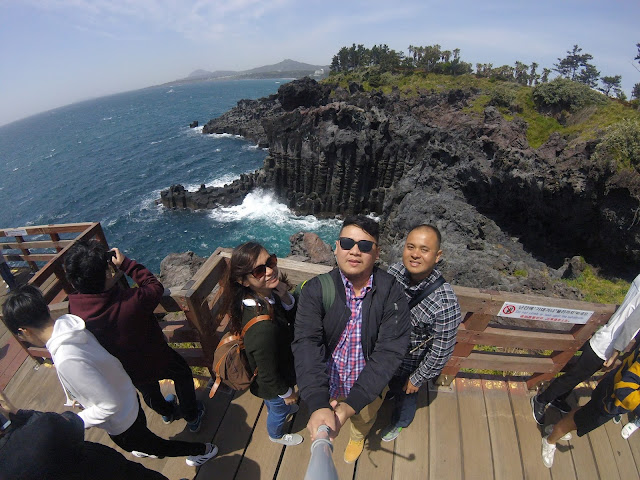 Cousin Judy, Me, and my Brother Wilson at Jusangjeolli Cliff