Seven Things I did in Cambodia

Truly one of the most exotic locations not just in the Region but in the whole world, Cambodia boasts of its beautiful gems, friendly people and ancient history preserved for the next generations. The Khmer nation is the eleventh country I have visited, my sixth on the ASEAN region. It the second stop of the French Indochina trip we had last January 2014 together with my cousin Judy and my brother Wilson.

I love a lot about this country that are worthy of making me think of going back to this beautiful country in the near future. But here are ten things I can never forget that I did in this amazing country!


You can't just leave any country without just a simple keepsake to remind you of that magical time you had on the land. And Cambodia is no exception to a variety of souvenirs you can get at a very reasonable price (again, remember to haggle!). 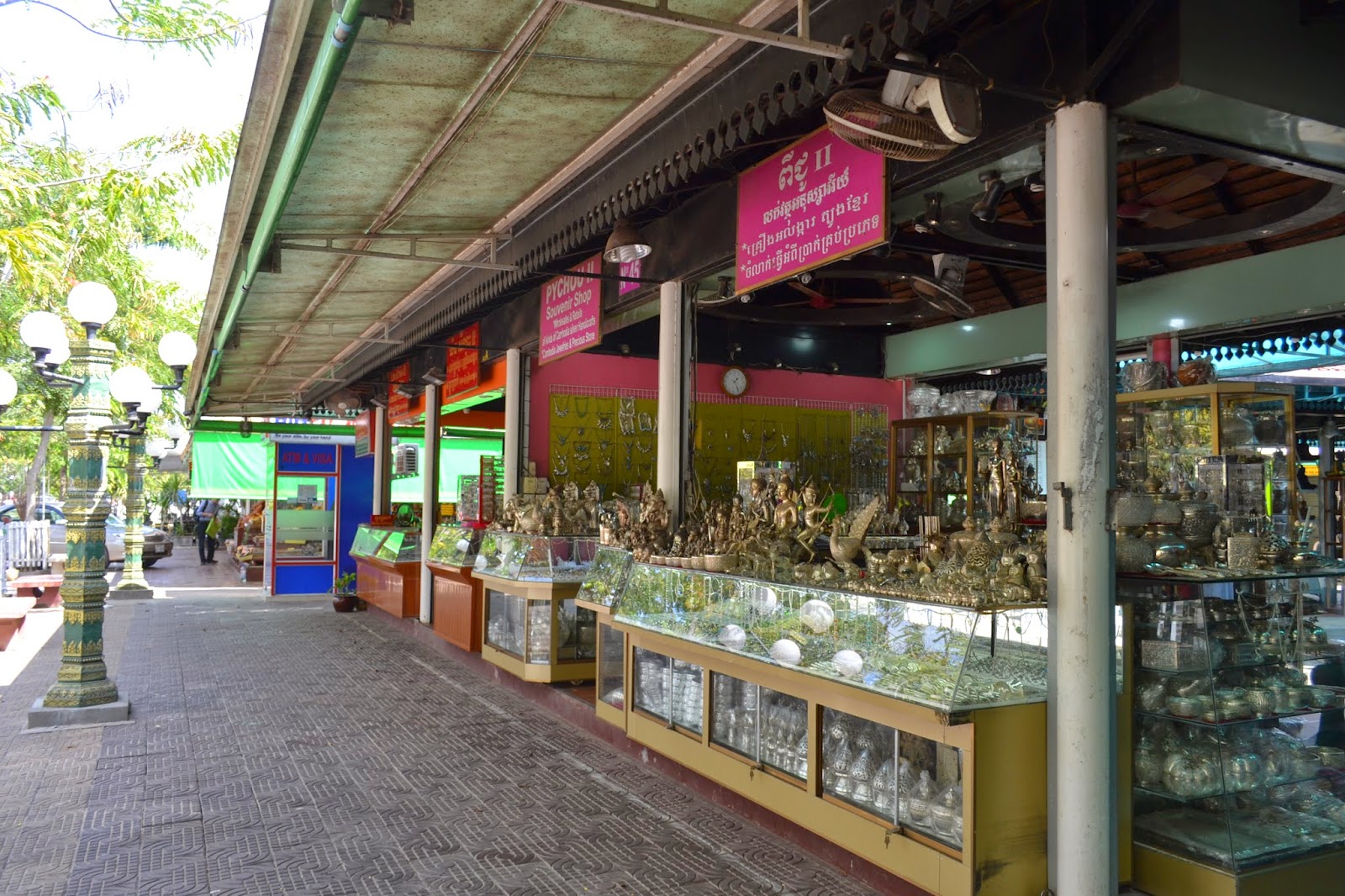 The Night Market at Siem Reap

There are several markets available for everyone the most famous of it is the Old Market situated at the City. But we did our shopping at the Night Market (Which is already open by early afternoon) where there are more choices and prices are actually cheaper. It is situated just after a walkway bridge behind the old market complex.

From spices boxed in banana leaf weaving to printed shirts all the way to silver works, Siem Reap is filled with a lot of treasures, big and small some even functional like the krama. The krama is a traditional Garment used as a scarf, bandana or when intricately folded, can be used as a bag.

Touristy items such as keychains and magnets are also available on a good deal! For me, I got my mini Cambodian flag for my collection, a miniature monument, some magnets as gifts, there's just so much for everyone!

Tip: The money widely used in Siem Reap and in all of Cambodia is the US Dollar. So it's nice to bring those spare one-dollar bills that are often refused on money changers and use them to buy those woven products and coin purses!

Well you can't just run around UNESCO Heritage sites but you can walk through them and appreciate the beauty that was made hundreds of years ago by the Ancient Khmers. Siem Reap literally stands for "Defeat of Siam" - or today's Thailand - which was named due to the victory of the Khmer against the Siamese. Along its glory, it left these wonderful Dravidian architecture that is distinct to its region. 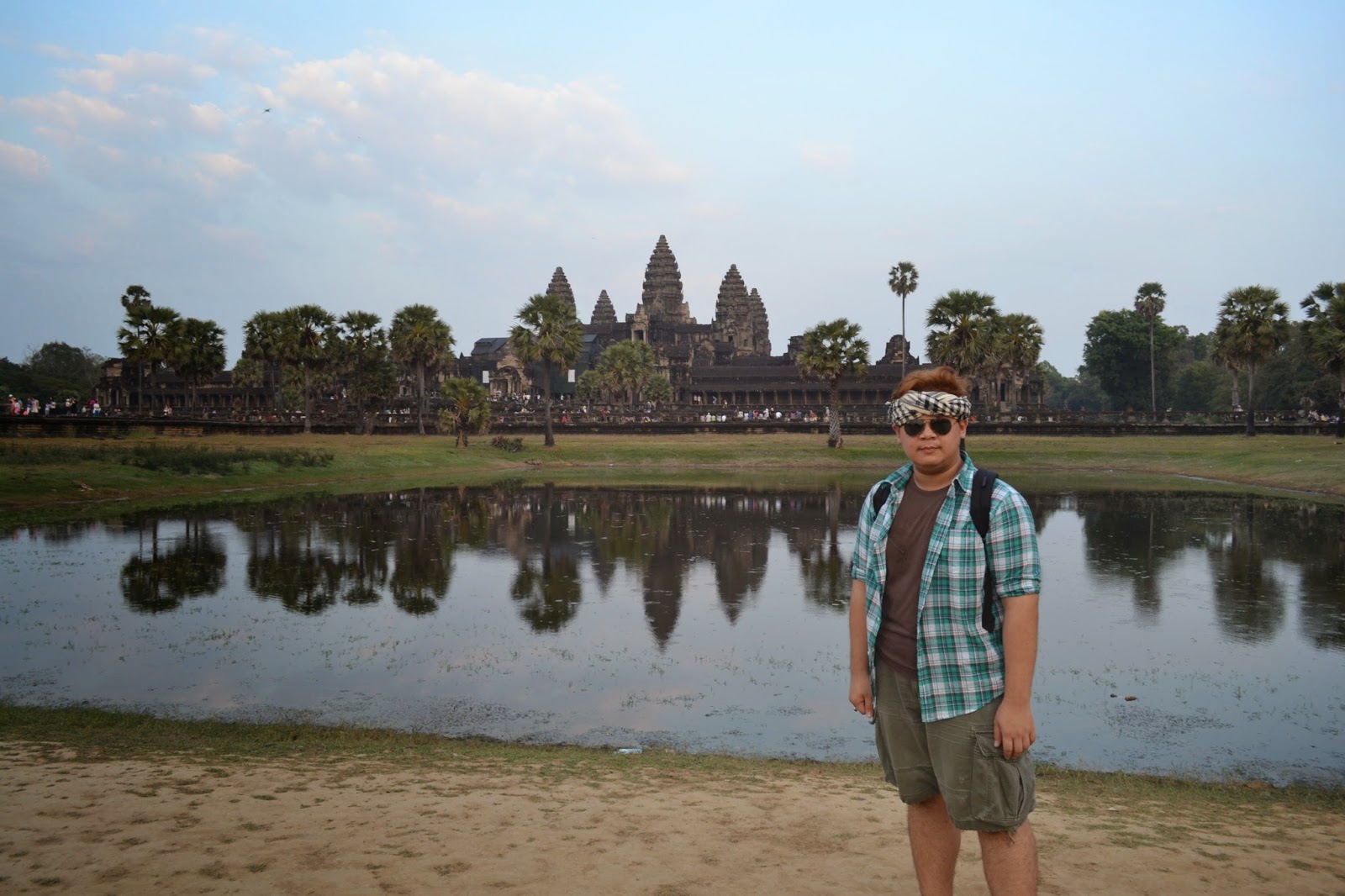 Me in front of the Ethereal Angkor Wat of Cambodia

The most famous of all these structures is the famous Angkor Wat. According to an Ancient Chinese traveler, the whole structure of the Angkor Wat was just built in just a single night by a divine architect. The sight of its moat is already a marvel but when you get inside its walls it is just simply breath-taking! Taking shots of it during Sunrise and sunset gives you different perspectives but both interestingly magical! 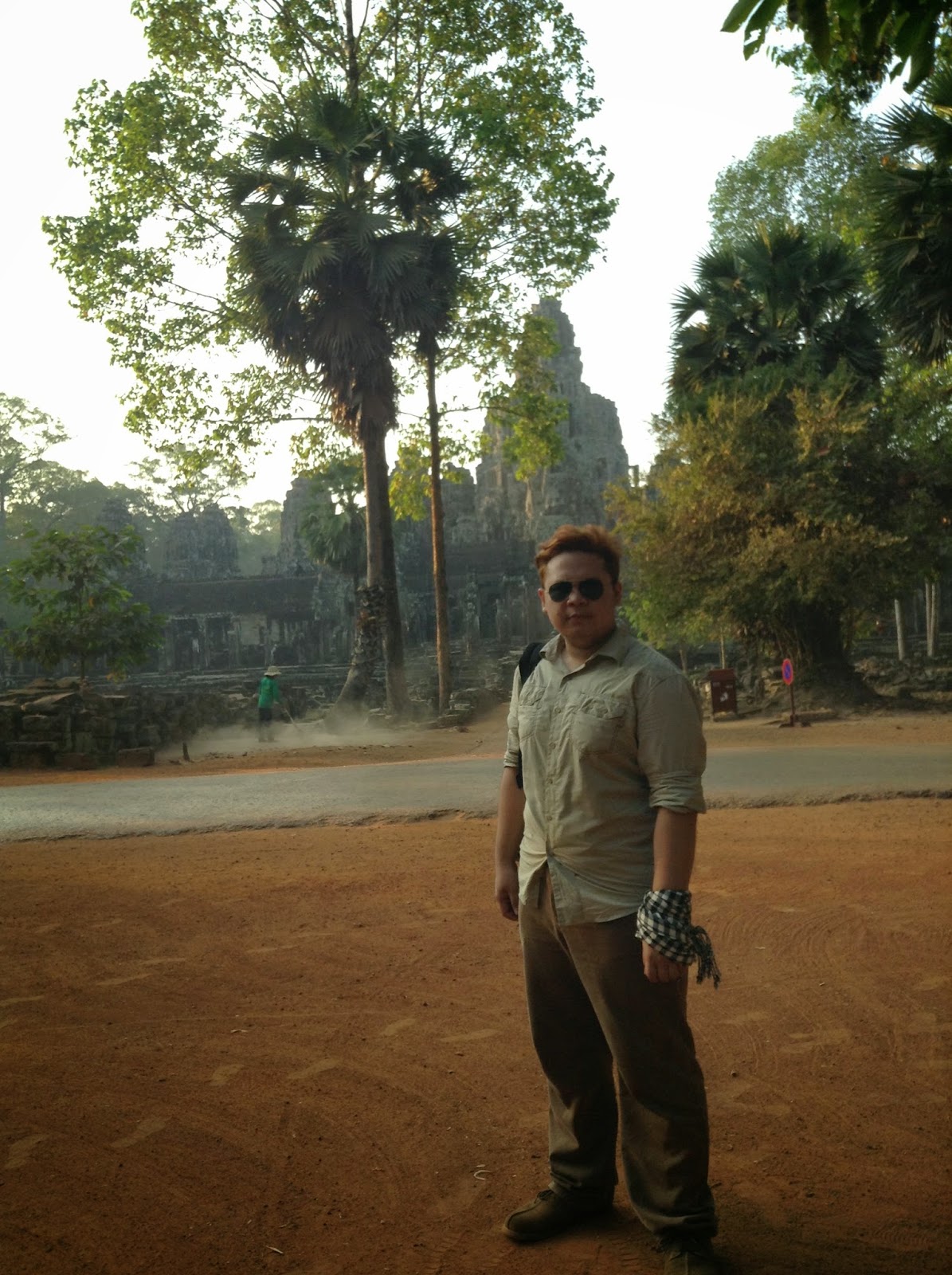 The Bayon and Me


Another marvelous Temple is called the Bayon which features gigantic pillars with faces of different reactions. though it is just a few kilometers away from the Angkor, it features very distinct architecture style.

As a true-blooded Filipino, it is in my nature to be in love with taking pictures! And it is a perfect match for me to be on these beautiful marvels from the ancient world. Every shot I take in my camera on any angle is just magnificent. The wats, the buildings, the smile of the friendly Khmers and just the life of the ancient city that I was once in.

Tip: For just 20 USD you can get a whole day pass which can get you to all of the buildings on the Ancient city of Angkor. You can get the pass the day before your morning trip so that you can get the afternoon before the registered day, for free!

It is best to see the Angkor Wat both on Sunset and Sunrise! Better be there hours before the sunset and the sunrise so that you can get a very good spot to watch it and take great pictures of it, not just of the architectural wonder but that unforgettable moment.

The Khmer tuktuk is slightly different from the ones we see on the streets of Bangkok. These ones are with the motorcycle detached a separate carriage while the ones in Bangkok features a whole body with the motorcycle inside the carriage. But it still has the same use and capacity. The fare for the tuktuk depends on the length of the journey and of course, your deal with the driver. 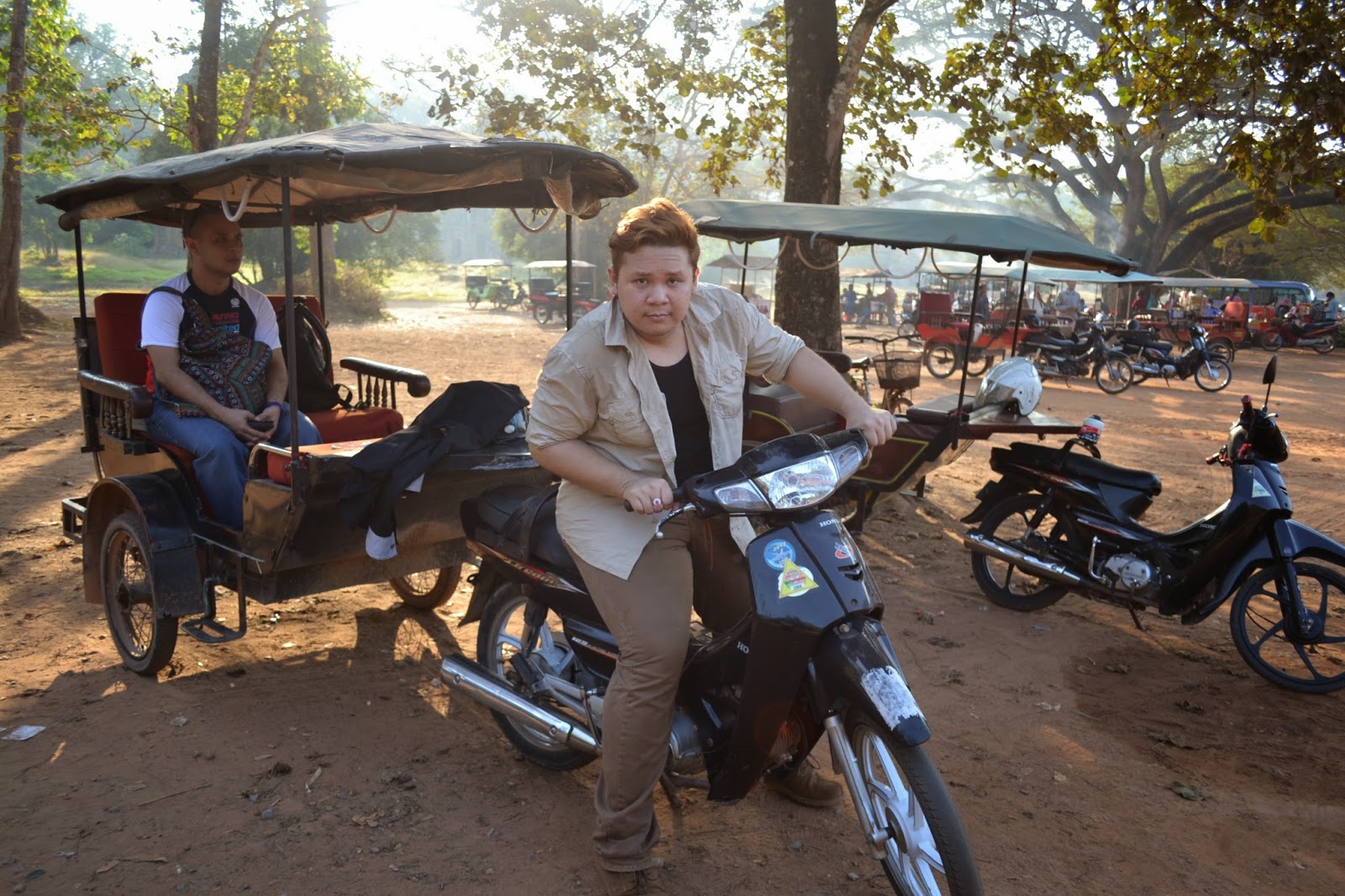 A photo of mine during my break as a tuktuk driver.

In our case, we availed the tuktuk service of our hotel, the Bou Savy Guesthouse and we just payed 15 USD for a whole day trip around Siem Reap and the Angkor City. The drivers at Bou Savy are very friendly and nice and they will assist you in your journey! Our driver even has a box of bottled water for us during our trip to the Ancient City.

Tip: The drivers can understand English and they can even talk basic English so just tell them and converse to them nicely and he will take care of you in your journey. Also, tuktuks are open air vehicles so expect a fast and windy drive! Better to bring your sunglasses to keep the wind out of your eyes, besides we all love a breezy trip to the temples. 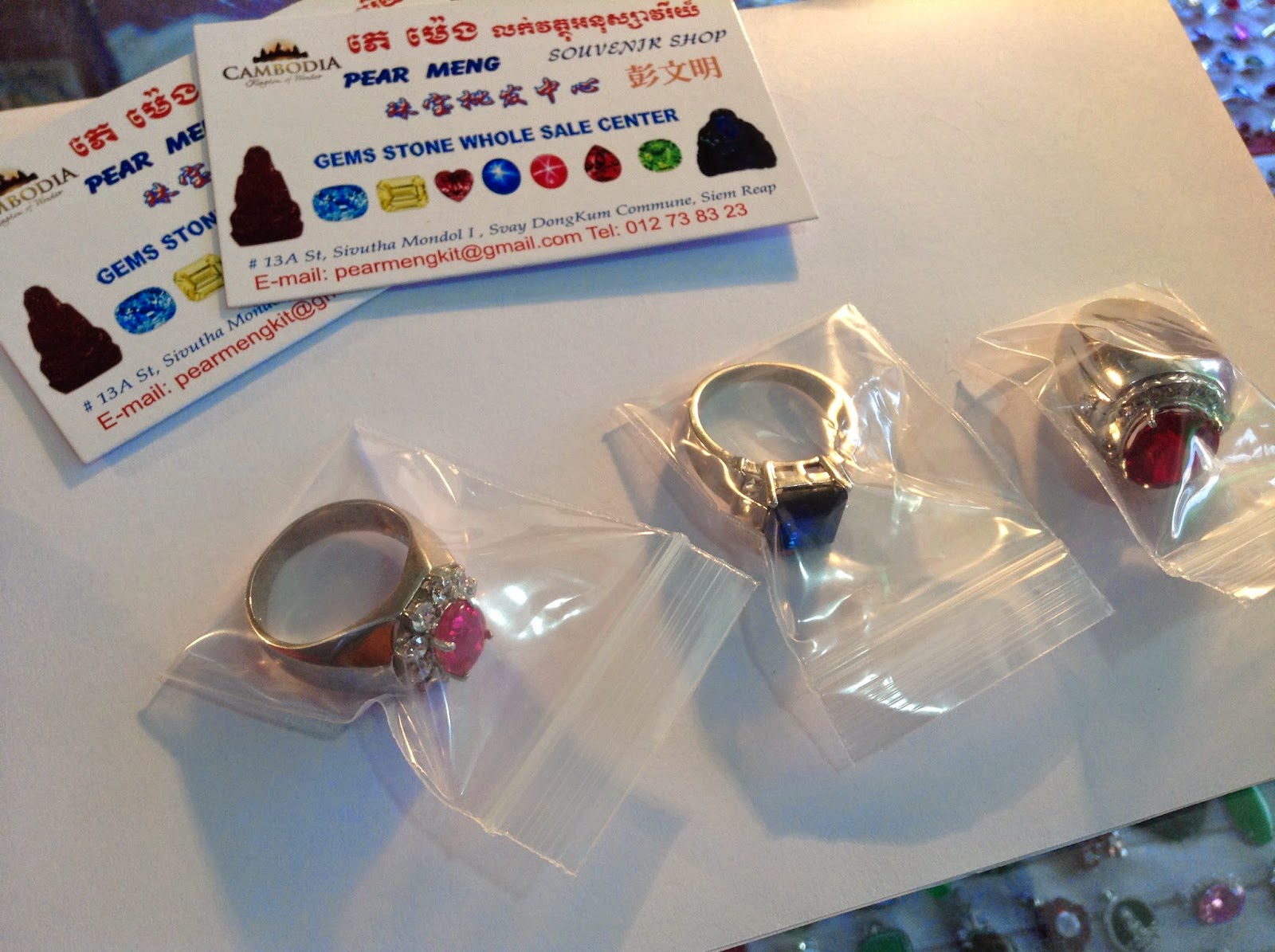 Cambodia is not just known for its Ancient ruins but also for its gems! Rubies and Sapphires and Aquamarines lined up in great quality. Just make sure to haggle their prizes so that you can get a great deal! Most of the rings and necklaces are encrusted on Cambodian Silver which does not tarnish (for me at least) but they also have Chinese Gold upon request. 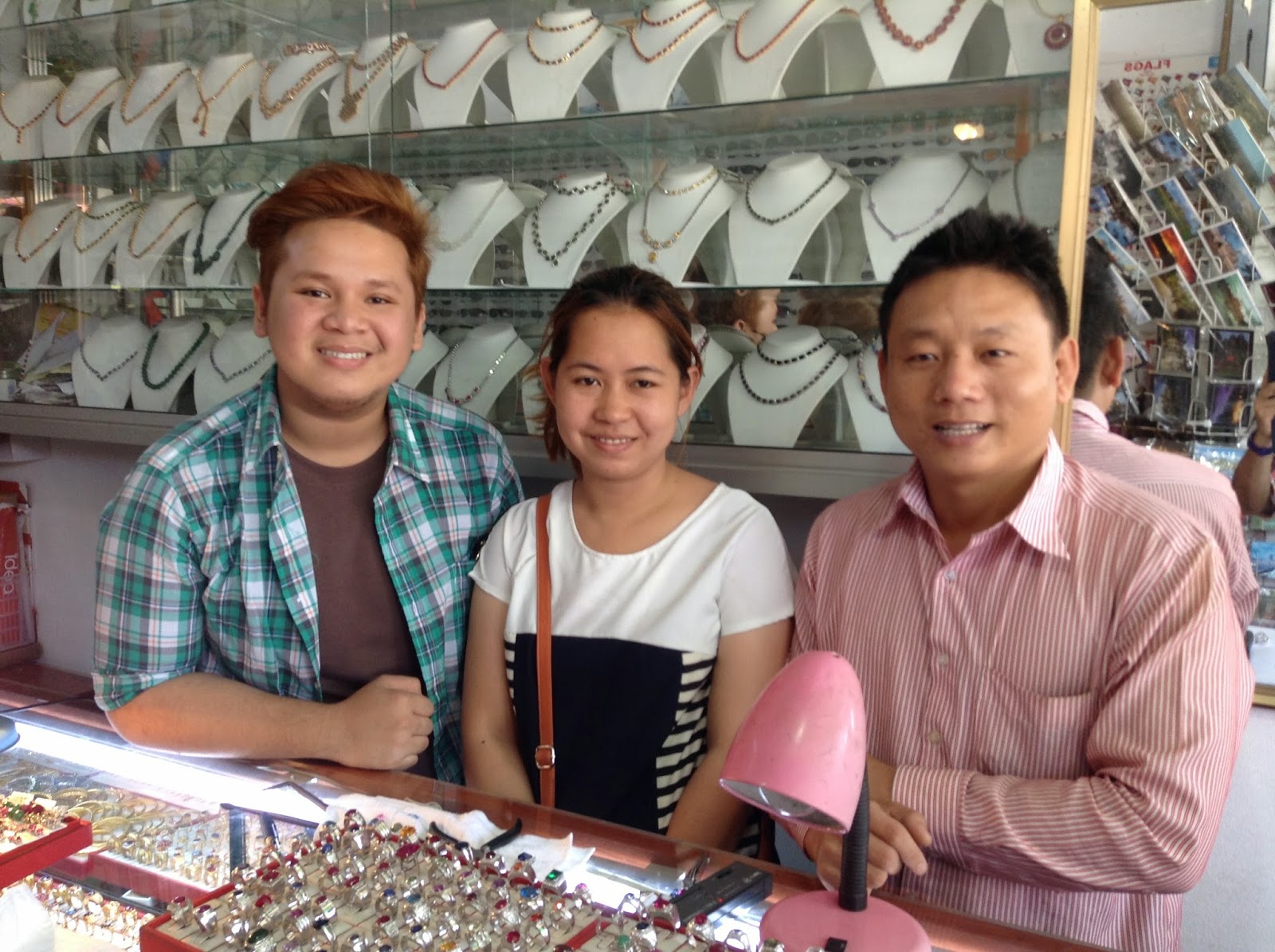 On that very moment have I known that Sapphires are not just shades of blue but it ranges from white to pink and there is even a yellow sapphire! But one it's rare variety is the star sapphire which is a hazy blue color but there is this one big sparkle that is permanent to it in the middle of the stones cloudiness.

Tip: I once had a short conversation with a Thai businessman from the US at Bangkok and he told me that travelers are said to have at least one piece of ruby jewelry for protection.

5. Biking around the Ancient City 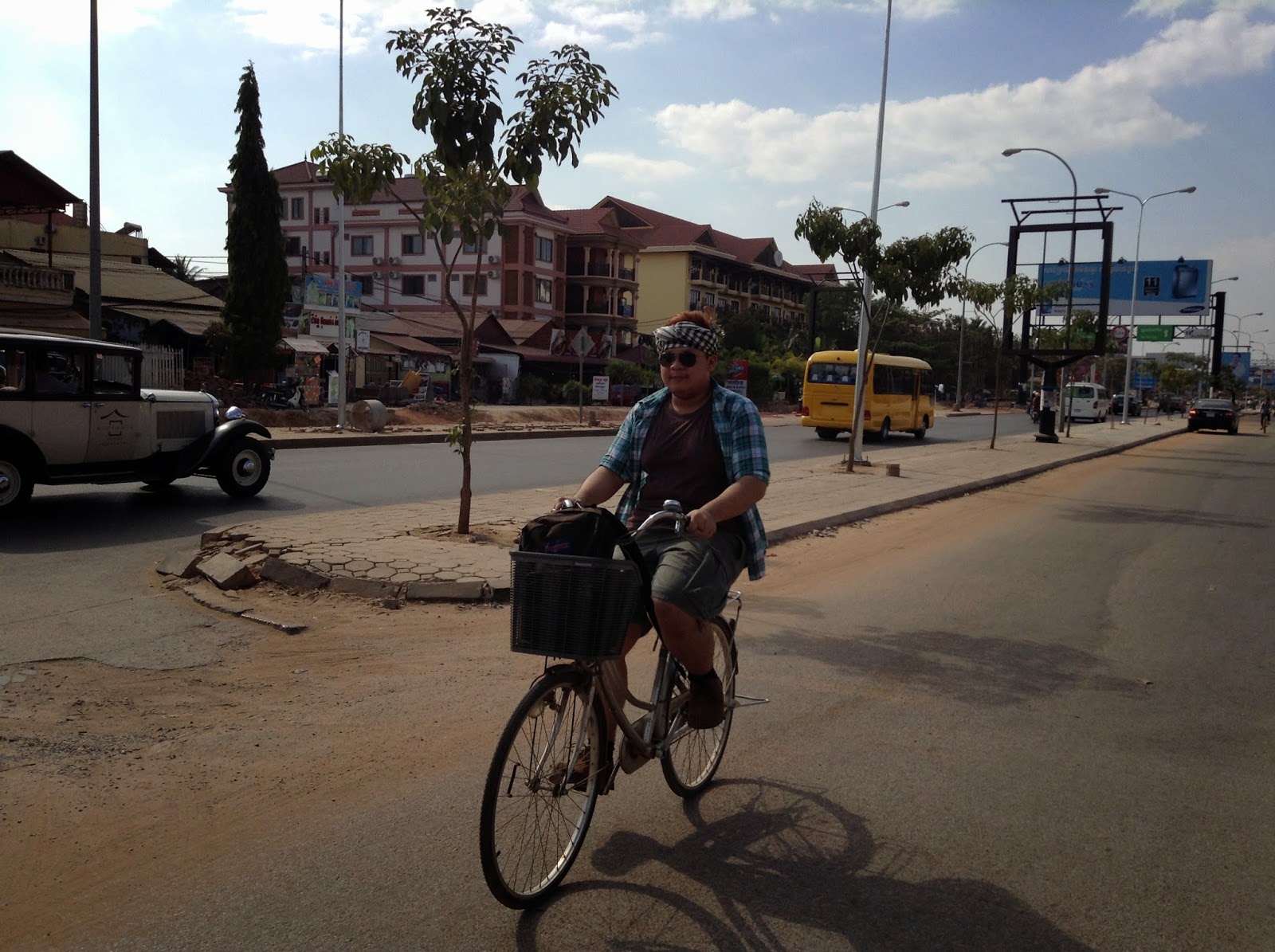 Me on my rented bike roaming around the streets.

Bicycles are a very good (and cheap) means of going around the city if you are ready for some dust and some sun! It's a very good way of roaming around while keeping it up with the locals! For just two dollars, you can use the bike for a whole day around the city. It comes with a chain and a lock to keep it secure so that you can park at any part of the streets as you go shopping and dining. Just don't forget to keep your keys and make sure they don't jump out of your pockets!

Tip: Just make sure to check on the chains and the brakes so that biking experience will be a breeze! It is best to rent your bikes early in the morning so you can get to choose the best ones.Souvenir

Traveling by tuktuk or by bike makes roaming around faster but nothing beats walking on our two feet. The people you may meet, the aroma of that corner restaurant and the good prices and deals you can get! Nothing beats walking along the streets and feeling as one with the locals. Language is not much of a barrier because most Khmers know basic English and they are used to communicating with tourists and travelers from different nations! 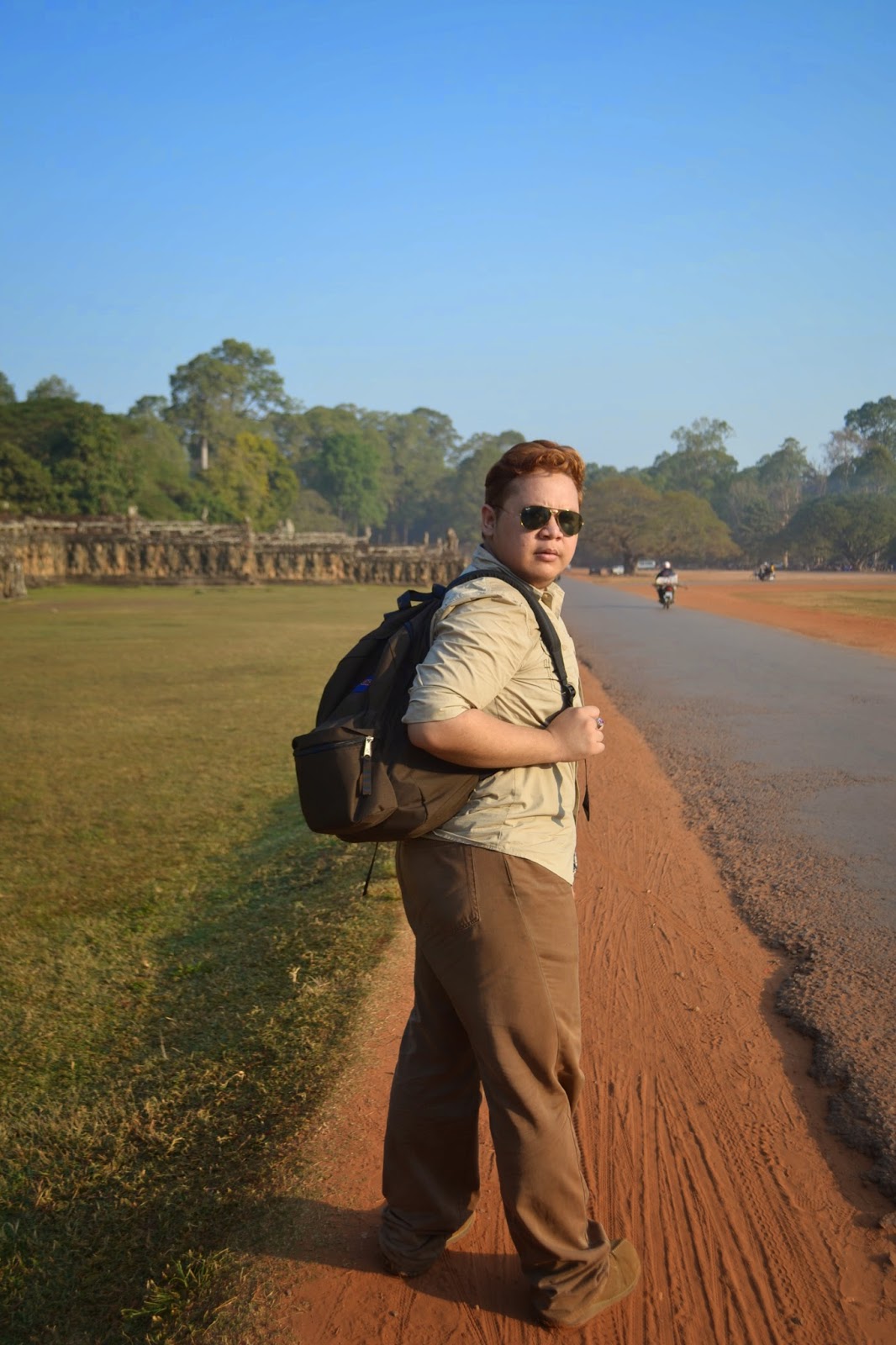 On the dusty road around the streets inside Angkor City

Even inside the Angkor City, you have to walk inside all the temples and shrine sites for all the bikes and tuktuks are parked on a designated area. But believe me, every walk is worth it!

Tip: In your walks, it's better to bring an umbrella or at least a bottle of water to keep you hydrated from the heat of the sun! Cambodia is a tropical country so expect warm sunshine all-throughout the year except on the monsoons! Just forget to wear that sparkling smile! 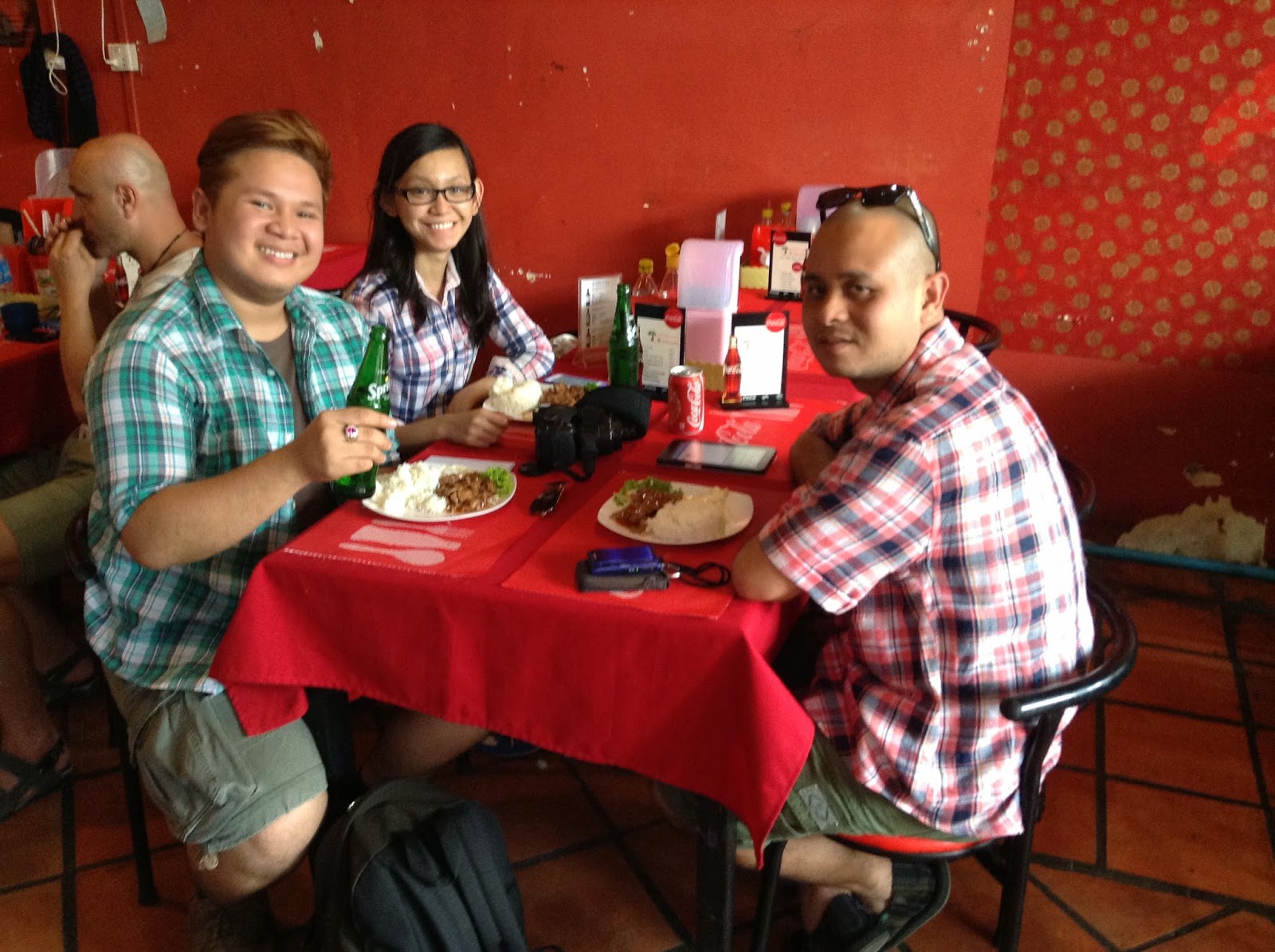 Me with Ate Judy and Kuya Wilson at Golden Coconut, Siem Reap

We all love a hearty meal every trip we take and Cambodia has its own taste to cater our craving palettes. In general, Khmer cuisine is spicy, not as spicy as Thai and leafy, but not as leafy as Vietnamese. It has it's own distinct savor to its dishes which at first you may think it's a bit bland but it just shows the real taste of the food, not much strong spices or seasonings but just the exact amount of everything. 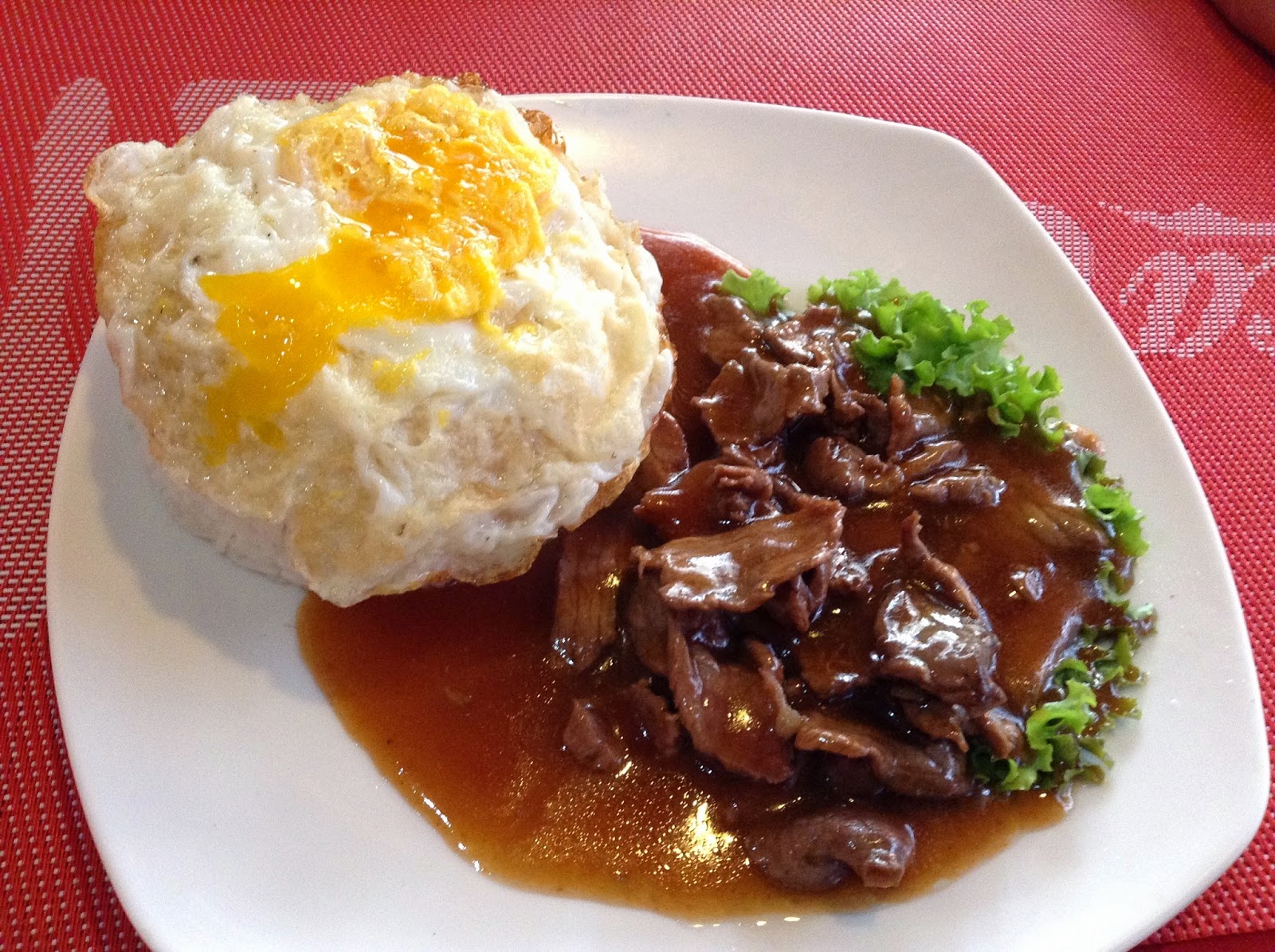 We cannot get enough of our Beef Lok Lak from Golden Coconut that right after our dinner on the first day, the second day we got back to it and had the same exact meal! Golden Coconut is a Restaurant located in the Pub Street section of the Old Market in Siem Reap. It has these favorite Khmer dishes, Ice Cream, Shakes and a bar.

We also had dinner at our hotel, the Bou Savy Guesthouse and their version of the Beef Lok Lak is also good! But one unforgettable dish was the fried rice with mushroom and beef. For just 3 USD, you can enjoy a stir fried rice with local mushrooms and their savory beef all mixed and concocted together in a delectable dish! 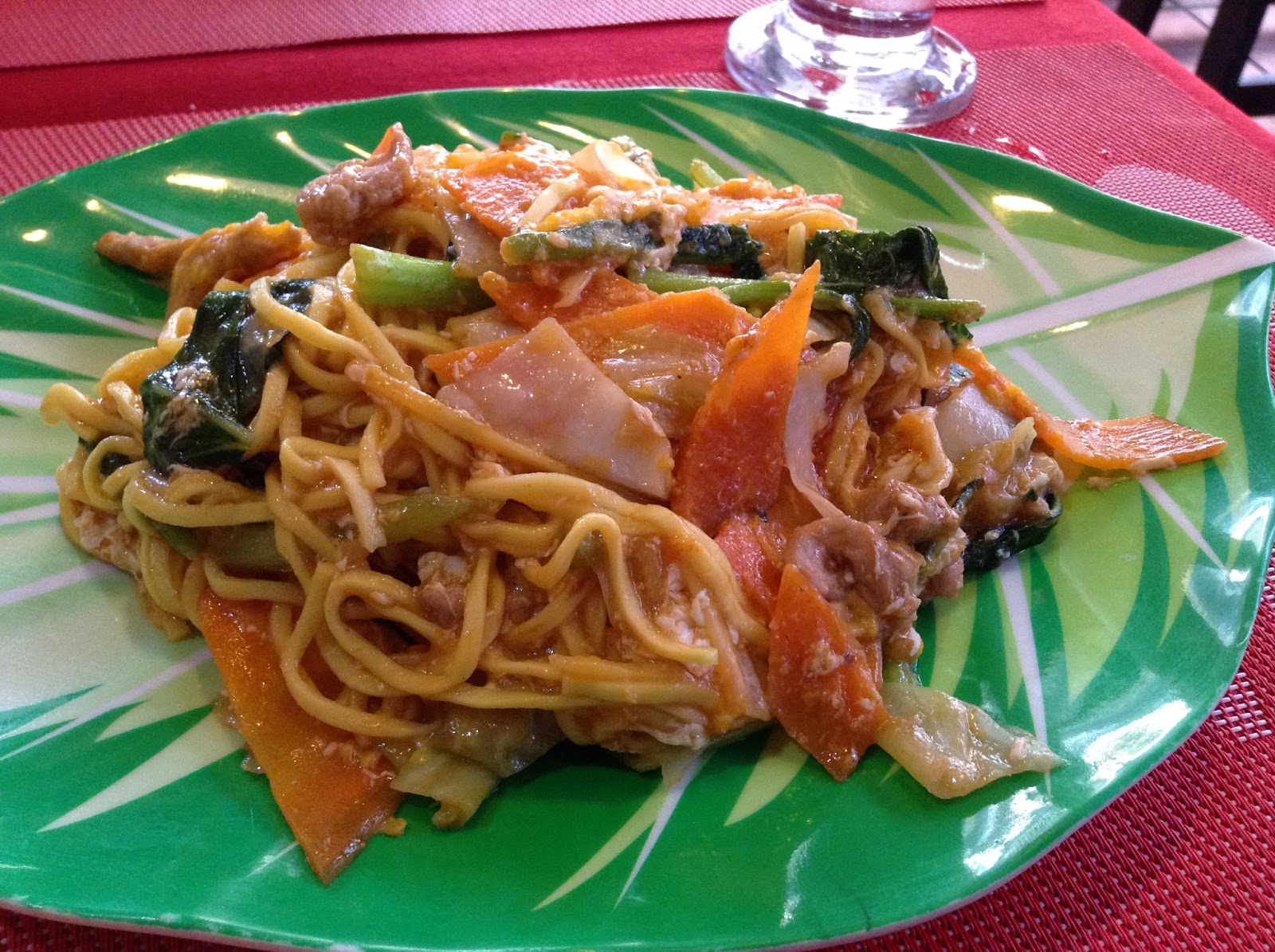 Tip: Just as long as you know your allergies, it's not very risky to try Khmer Cuisine since there is no surprising taste or very spicy feel to its dishes unlike dishes of other countries! Bread is a staple just like in Vietnam through its French influence but rice is available.


There you have it! Seven things that Seven did in Cambodia! Truly one of my favorite countries that I have been to, it is absolutely rich in culture and people who take pride of the ancient history that was there hundreds of years ago and is still unforgotten.

But never ever forget that the best souvenir anyone can have on their travels are of course pictures. It is not just a proof that you were there at that place, at that time but also a reminder of that glorious memory that you can relive anytime you wish.