Hong Kong, Asia's World City is a Special Administrative Region of the People's Republic of China. Once a British Colony in the Orient, the British Rule over the Islands ended on July 1, 1997 or much known as the Handover.

It was my first time in Hong Kong and it marked itself as my Fourth Country/Territory that I have visited. It was very exciting because my Mom had been here last 1990 on a Vacation trip with my father and my Grandparents! The fact that I chose Hong Kong to Celebrate my birthday in makes me miss her so much! I love you so much Mommy and I know you helped me reach Hong Kong.

As soon as we arrived, we were carried by the bus which fetched us up on a remote part of the Airport to the Arrival Gates leading us to the Immigration Process. It was a very liberating experience because it is the very first time I get on the plane with just me and my Ate! Ok we were not just the ones inside the plane generally but I mean it was just the two of us, no other friends and family! But when we got there, we waited for a few minutes for my Cousin Kuya Jonjon and Ate Ardel's Flight! I was so excited to see Gabe, my nephew and I was truly looking forward to a great trip just like our trip to Boracay with them, Kuya Jon, Ate Ardel, Gabe and Ate Ming! 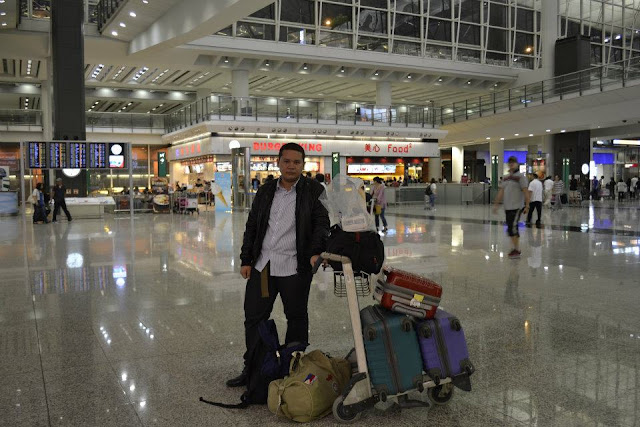 It was also a sad moment because my Faux leather jacket just slowly deteriorated as we arrive. Yup! Deteriorate as in the Polyurethane shell of the jacket just started flaking all over and I really will miss my Zara jacket! We've been through together for quite a while!

As soon as we got of the Airport via Coach that will directly lead us to the hotel, I started to get ecstatic with the beautiful Night View of the Territory! The Bus ride to the hotel, Panda Hotel, was quite a while from the airport that gave us the chance to see the beautiful lights that float around the city! From high rise buildings, to the suspension bridges, everything is just on fire! And of course, Double Decker Buses! Now, I can say that I'm on Hong Kong! 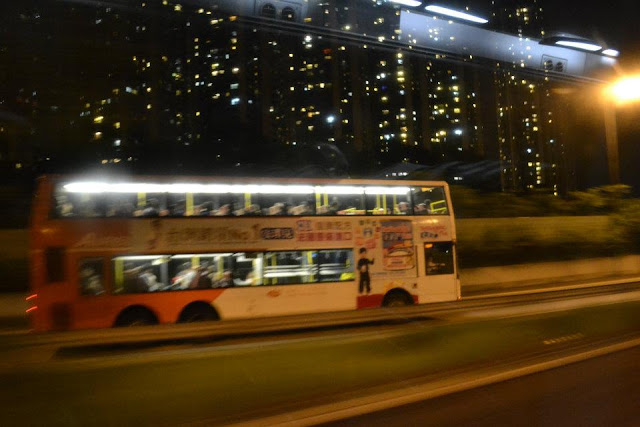 First sights of Hong Kong through my lenses! Buildings and Double Decker Buses

This is actually our Second Trip with Kuya Jon and Ate Ardel since Boracay last January and I really enjoy Travelling with them! Not just because they are very kind to bring us and help us having carefree travels which make us feel like luxurious tourists haha but most of all, they are just so fun to be with! All the stories we exchange and all the laughs we do together with Gabe and Ate Ardel's Mom Ate Ming, it is just irreplaceable!

As we arrived at the Hotel, it was so, Panda-y!!! With Panda walls, panda figurines and stuffed animals, we are definitely in Panda Hotel! It was around 10 pm when we finally settled down our check in requirements and went to our rooms! So Kuya Jon decided that we should grab some dinner at some McDonald's since it's quite late so we just have to get thighs through 7/11 and a 24 hour McDonald's! I am so excited because visiting those two establishments gave me things that truly I can appreciate the difference between my country and the other that I am visiting, just like in Bangkok! The Panda Hotel Lobby located at the 3rd Floor. Hotel Lobbies on this part of the world are not usually found at the Ground Floor.

So after we had our dinner at our rooms, we settled down to bed for a good night's sleep! Panda Hotel is a cozy place to retire for busy leisure days around Hong Kong! I particularly like their bed sheets that are just so soft and will truly give you a good night sleep in comfort! Their Buffet Breakfast is as great as well with a wide array of food from Hash Brows to Deli Goods, an egg salon to a salad bar. And the best thing about it for me, the Ketchup, it's like SOUP on a giant bowl wherein you use a laddle to help yourself with it! there you got it, I LOVE Ketchup! It is located inside the Mainland so it is quite far from the Harbour and the Shopping Districts but you can reach Disneyland from it much faster than other Hotels from other districts. 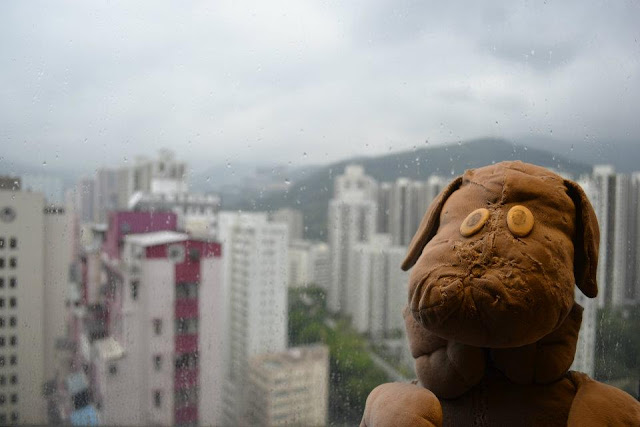 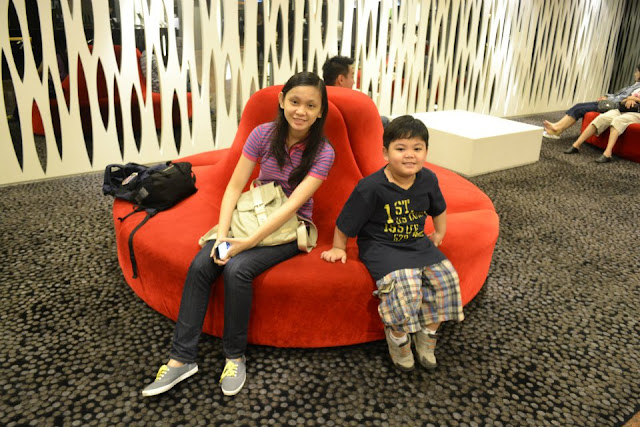 This is Ate Judy and Gabe waiting for our Bus on the First morning.

Our First stop was Victoria Harbour! I was so much excited, okay excited will not even describe it the least because Victoria Harbour! THAT is what HONG KONG pictures in my mind every time I hear it! Just as too Lady Liberty to NYC and Eiffel to Paris, the Cloudy, building dense harbour is what Hong Kong is to me! So on our ride to the harbour, we are joined by other Pinoy Tourists inside the bus! Our Guide Jenny from Continental travel and Tours is just so nice and bubbly! She knows so much not of her own City but of the Philippines as well and it made us very happy and special while we were inside the bus! She even thought us some Cantonese!

And so we arrived! As I got my first glimpse of it, as usual, I stopped, stared and savored that very moment! I just can't believe I am actually there, at that very spot facing the whole harbour! Forgive me for being such a drama king but I'm sorry I just really am, this is how SERIOUS I am when it comes to travelling around, I am DEAD SERIOUS about it and every trip is truly a BIG DEAL for me, the place does not just make it a big deal for me, I MAKE IT A BIG DEAL FOR ME! 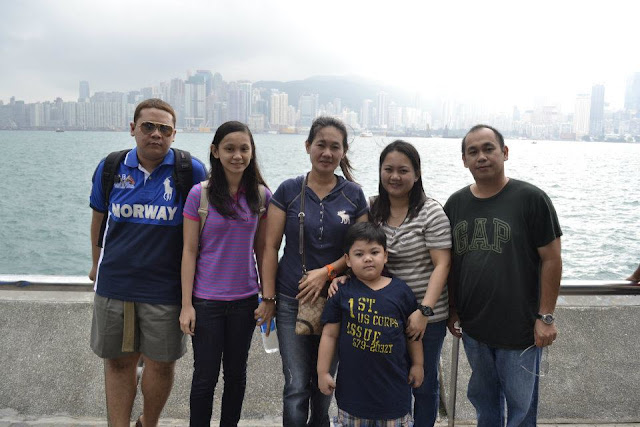 The Great View of the Victoria harbour has been transformed into a beautiful boardwalk park and they named it the Avenue of the Stars! Just like in Hollywood but it features their own Hong Kong and Chinese Celebrities like the Pinoy Favorite Jacky Chan, Fu Chi and so much more. But the Star of all the Stars is of course, the legendary Bruce Lee. The park was built when he was already deceased so in memory of him is a big statue of him and his famous Kung Fu/Karate Chop Pose at the very end of the Avenue. 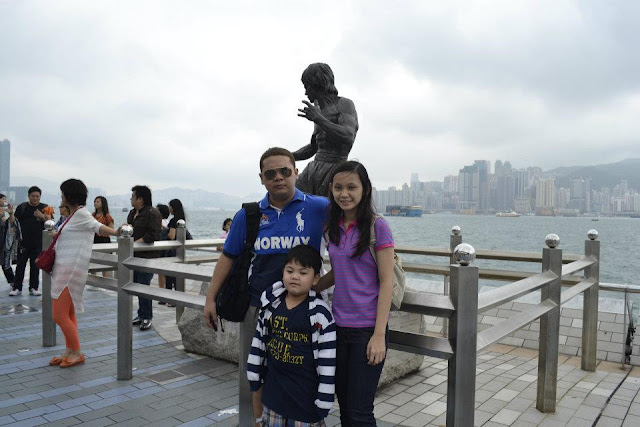 Me, Gabriel and Ate Judy posing at the Bruce Lee Statue! Photo taken by Kuya Jonjon. 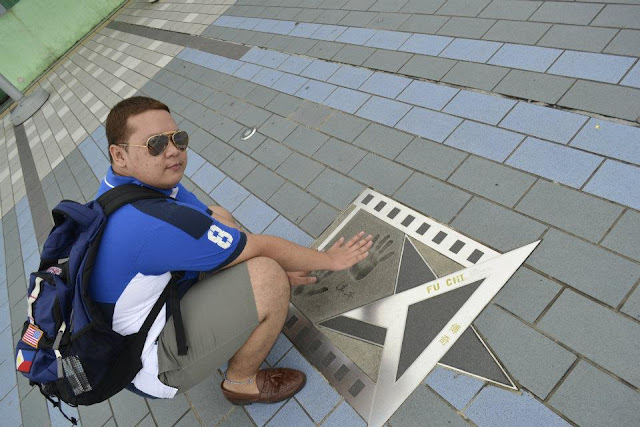 Me at Fu Chi's Handprint. I don't know Fu Chi but I just think the name's cute hahaha

The Hong Kong Trip was truly memorable even if this is just the very first part of our Four Day Hong Kong - Macau Adventure! Stay tuned for more stories on this trip including rants about the Park near the Ocean, Something that brings Europe to Asia and of course, A story about our favorite Mouse!