Iloilo City, the Capital of the Province of Iloilo and the center of Western Visayas has a long history dating back to Pre-Spanish Colonial Period. This is where the ten datus from Borneo went with their Golden Hat and Pearl Necklaces to trade for land with the natives. This is also the First and Last Stop of my Western Visayas Adventure. We started our journey by leaving Cavite at around 2:30 am ad arrived at NAIA Terminal 3 at around 3:00 in the morning. Our airphil express flight will leave at around 4:45 so the check-in counters are already open as we arrive. This is my third time travelling with a bunch of my High School Barkadas and it is always fun to travel with them. After checking in we took some pictures, which my friends Myrcel and RJay really are into.

We purchased our MNL-ILO-MNL round trip tickets ahead of time during the promo period for a total of 2024 pesos inclusive of tax and other fees. One thing I really like with airphil express are their Boarding Passes because you can keep them as souvenirs compared to Cebu Pacific that uses cheap laser receipts that wore out in time. Well of course my Travel Journal is with me in this adventure! 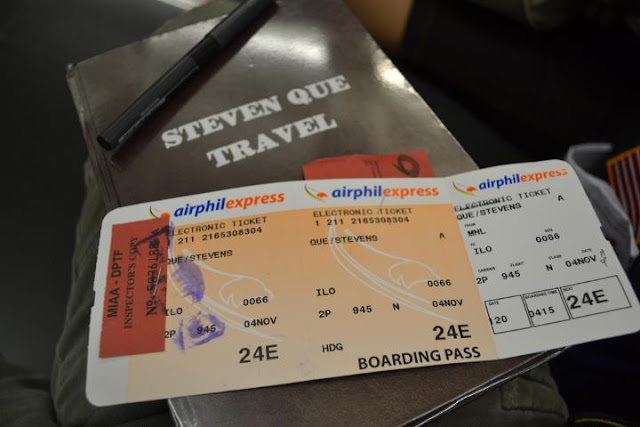 We arrived at Iloilo International Airport at around 5:45 in the morning, 5 minutes ahead of time. It was definitely like the ones I see on pictures. It is like a Miniature version of NAIA Terminal 2. The structure, the design and even the colors used are very identical. Even the interior of the Airport is patterned with the PAL Terminal. 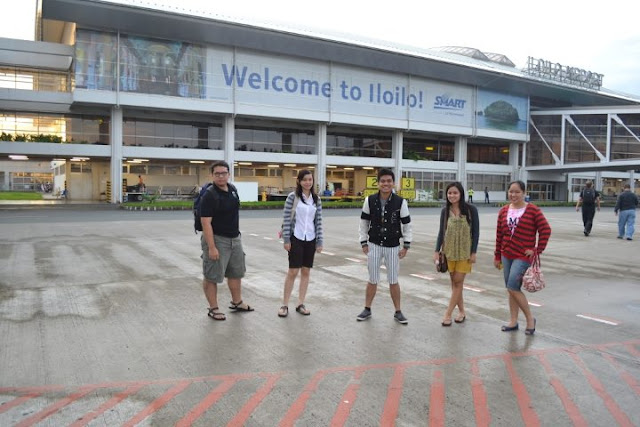 Me, Ate Judy, RJ, Ivy and Myrcel at the runway of Iloilo Airport

After completing the arrival requirements and grabbing our bags, we headed to the van rental area and rented a van bound to Ortiz Port since we are directly going to Guimaras Island this time. The van ride was really relaxing because we saw the road from the airport to the Iloilo City Proper and everywhere we look, it was clean. No candy wrappers, no plastic bags, not like the other cities I have visited before. The sky was starting to lighten up as the sun rises higher and higher. If you wish to see about my Guimaras Getaway, you can find it here at Guimaras in a Day

On the third day, after visiting Guimaras and Bacolod respectively, we went back in the morning to IloIlo to continue our Adventure. Our flight will be in the evening so we have the rest of the day to roam around the Province and visit the spectacular sights to see. We went back to SM Traveler's Lounge to check in the rest of our luggage and asked for vans. Just beside the Biscocho House are van shuttles to the Airport. We talked to the man in charge if we could rent vans that will take us to San Joaquin, a town farthest west of the Province of Iloilo, just beside the province of Antique. We agreed on a price of 3000 pesos for a round trip to San Joaquin, passing to Maig-ao and will bring us directly back to the Airport.

After about an hour drive along the scenic countryside of Iloilo, we arrived at the town of San Joaquin. Seeing the San Joaquin Church feels very colonial period! Just the Church itself makes you feel you are in the early times. The Relief on the top of the church facade is amazing. and the church was huge I must say. We took some shots outside the church and went inside for some prayers. 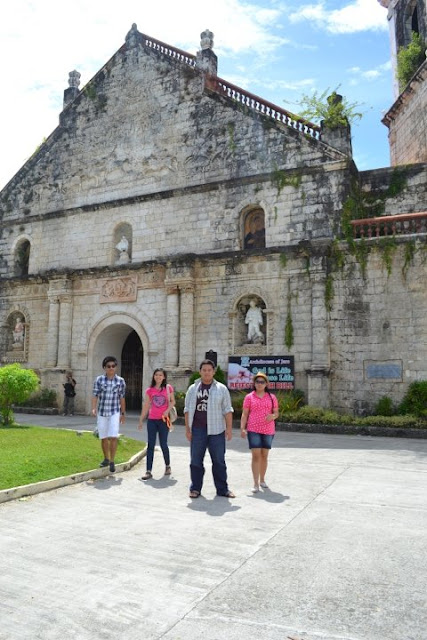 RJ, Ate Judy, Me and Myrcel at San Joaquin Church

On our way to the church, a funeral march has been held from the church to the Cemetery. The San Joaquin Cemetery is the main attraction of the Town. This is the one most travelers wish to visit because of its magnificent architecture. As we arrived at the Cemetery, the funeral has just ended but the people are still there. The place was magical! It doens't even look like the usual cemetery which is creepy and haunted, this one feels like you're in Italy. It was beautiful. 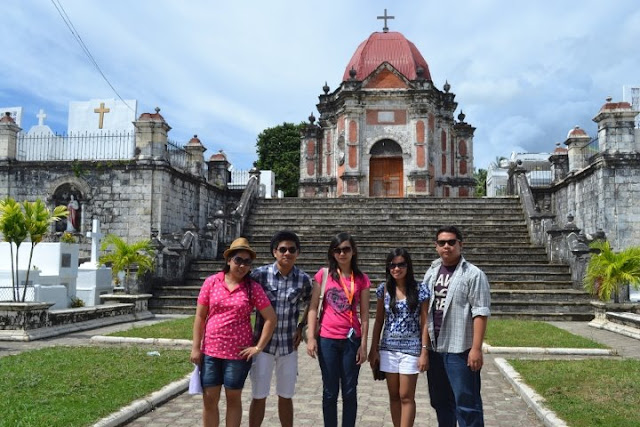 Me and the Gang at San Joaquin Cemetery

We then left San Joaquin and started on our way back to Iloilo City but of course, we are now bound to the most important destination and it is the most famous structure in all of Iloilo, the Miag-ao Church. Miag-ao Church is a UNESCO World Heritage Site and is hailed all around the world for its magnificent architecture. The Vast Relief in its facade makes it very wonderful. Just as usual, it feels so surreal for me because st that very moment, I am facing what I have been seeing in pictures and what I have been studying at school all these years. Now, I'm in front of it. 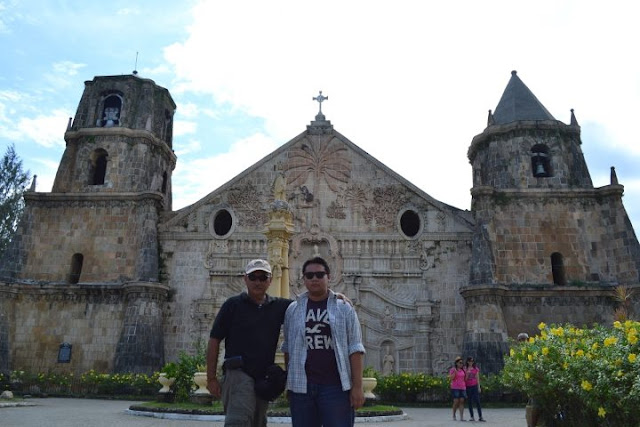 Me and my Dad in front of the Miag-ao Church

After a lot of pictures taken in front of the church, we moved on the road back to Iloilo City but we were starving and we asked our very nice Driver Kuya Sadam for a place to have lunch. He stopped us at a resort named Bantayan Beach Resort at Guimbal Iloilo. The food was amazing and very cheap! A Quarter Chicken BBQ costs with Softdrinks and Ice Cream that is made at that town, all for only 88 Pesos! We also ordered the signature dish of Iloilo, the La Paz Batchoy for only 35 pesos. The real ting tastes so much better than the ones we had in Manila. Seems like half of the soup is made up of Chicharon. 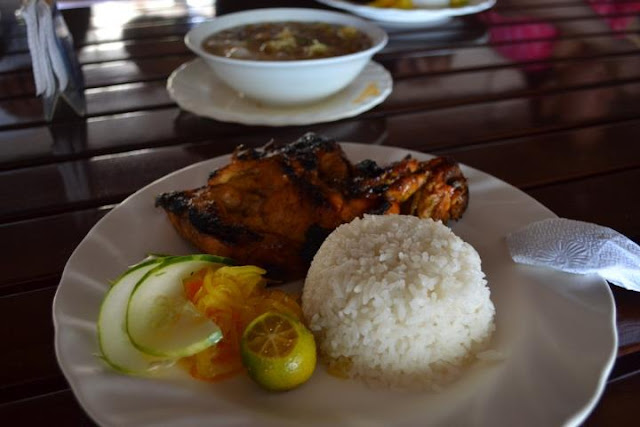 After that hearty meal that filled not just our stomachs but our spirits as well, we headed back to SM Traveler's Lounge to claim our Luggage and then we asked Manong Sadam if ever we could pass by some Pasalubongs and he was very kind enough to bring us to Wewin's for some Biscochos and then to Robinson's Place to grab some Shirts and other souvenirs. We then headed back straight to the airport and bid our goodbyes to our very nice driver Manong Sadam. He is really kind and I promised that we will get back to his City! 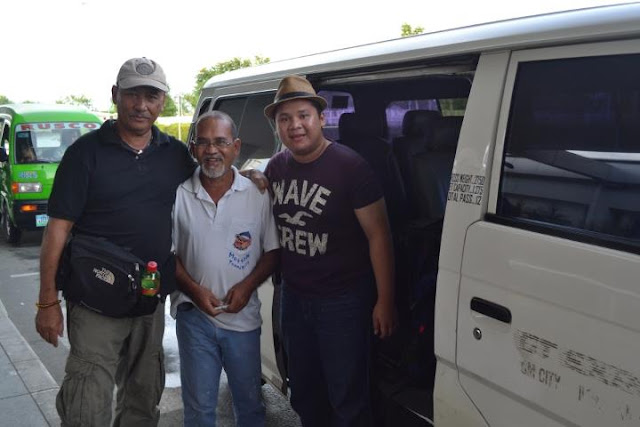 Our Driver Manong Sadam as he is called by his friends, with me and my dad.

We got into the airport very early for the check-in time. Our flight is about to depart at around 7:15 in the evening but we got there at around 3 pm. I always make sure in every travel to be as early as possible than late. So we still got to buy more souvenirs at the airport. As usual buying from the airport is a bit pricey than outside but the thing is you get to see a lot of goodies here that you seldom see at the city because it is seasonal so it's still worth it!

When the clock struck 5 pm, we were on queue to the check-in counter. I can say that airphil express has been improving since our last flight with them on our Cebu trip. Even if there is only one Ground Crew attending all of us, He is very fast in entertaining us yet very efficient. He reminded me of my brother because he kind of looks like him when he was younger. 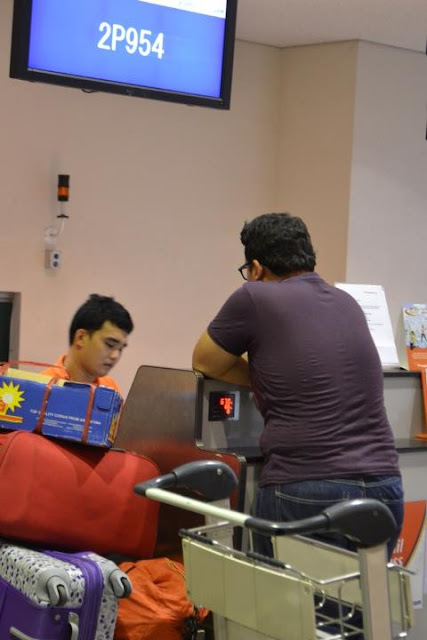 Me and the cashier that looks quite like my brother. I know my back looks big but I don't care! Kidding :)

One funny thing about the people in Iloilo is that most of them, like this guy in the check-in counter, keeps on talking to me in Ilonggo. Even the cashier at Kenny Roger's and the ladies at the Ocean Jet Ferry Counters are conversing with me in Ilonggo. Good thing is that I can understand Sorsoganon which is my Yaya's dialect and surprisingly, most of the words in Sorsoganon are the same with the words in Ilonggo even if the regions are so much apart from each other.

After checking in our baggage, it was time for some dinner at the airport! We have read from the blogs that there are great foods here at Iloilo Airport. So we had our meal at JD's Bakeshop. They don't just serve different breads and pastries but meals as well! I had my Ciabatta Sandwich and it was literally mouth-watering! Their Ciabatta was so soft and fresh that it made me want to bring home some. Unfortunately the ones for sale are sold out and the ones left are for dine in only. I was quite heartbroken but at least I did tasted it! 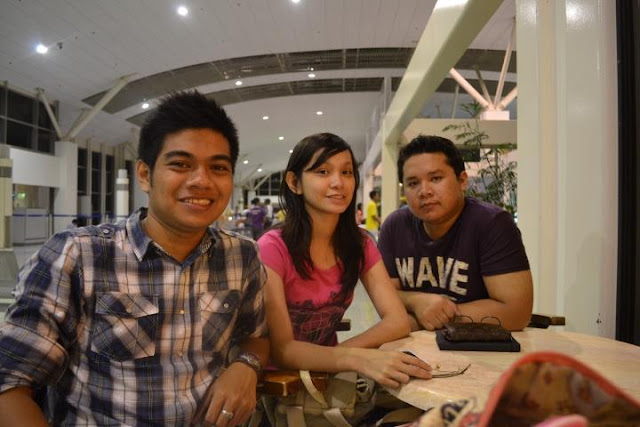 RJ, Ate Judy and Me waiting for our meal at JD's

After that we had some cakes at Coffee Dream just beside JD's! Their cakes are very daintily made and designed and the taste, Dreamy! They are small cakes served in a cute little box but if you eat it little by little, they you can say that it is worth it! My Ate Bought an Oreo Cheesecake, Myrcel got a Mango Cheesecake, RJ had a Cappuccino Brownie and Ivy tasted something controversial, it was named BTS or "Better than Sex". The name might sound vulgar but the cake was splendid! It is a moist chocolate cake draped with chocolate truffle frosting and topped with Walnuts! I'm not so sure if they are walnuts or pecans but whatever it is, I liked it! 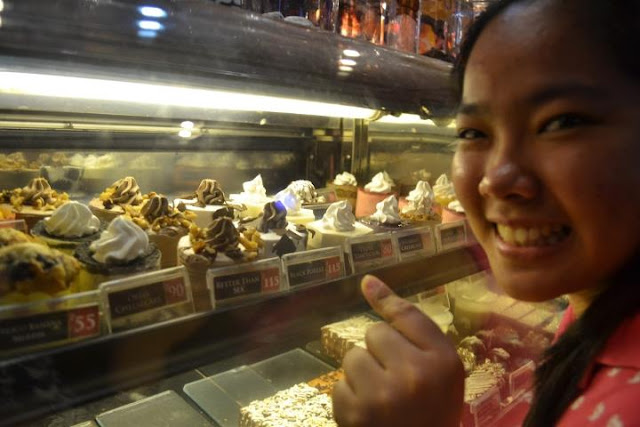 Just as we buy the cakes, I even saw one of my former students and we were both shocked to see each other far away from Cavite! He said he was on vacation because he is really from Iloilo and I told him I was on a Vacation. After that we went back to our gates and it was time to say goodbye to Iloilo! We left the city at exactly 7:25 and arrived at NAIA 3 about 50 minutes after. Airphil express truly had a great flight during that time and it makes me think that they are really improving. I even bought a shirt from the pretty cabin crew to make that flight more memorable!

Iloilo was truly warm. Not solely because of the weather but the people that makes up the whole province. I must say, just like in all of my travels that attractions and sceneries are just half of what makes my adventures complete! the other half is about meeting great and wonderful people that truly makes my adventure truly a memorable one and Iloilo really brought that to me! Scenic History, Fantastic Foodtriping and Enchanting People makes up my own personal description of the place that is Iloilo!
By Stevenson Q