If they think they have it in the Bag, SANDRA DOES!!! 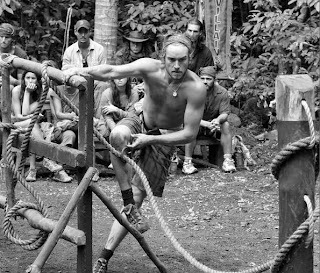 I really really like the Latest Episode of SURVIVOR HEROES vs. VILLAINS!!! Seeing all the surprises that left the mouths not just the of castaways but us Viewers open wide! With JT gone, I'm quite sad because I like him and his Country Perspective but I really think this is the big result of what he did on last week's episode. Yes, I do think Parvati's Move was very very cool but yup, I think she went to far. She should have kept it even just one for future use. I think a factor why she did that is because she wants to show off. Correct me if it wasn't :) But I do love Parvati, I Love Russel I LOVE THEM ALL! Even JT, I was quite sad he went away, Yup I think it was a mistake that He gave the Idol to Russel but I'm surprised I wasn't that disappointed at him after all!

But of course, by the very first time I heard rumors about SANDRA being one of trhe players for this season, I WAS ECSTATIC!!! Seeing how she played Pearl Islands, I'm sure it'll be a very interesting season! Even if Russel was there, I still had all the hopes that Sandra will go a very long way! Imagine! Winning Pearl Islands without any Single vote casted against her UP UNTIL NOW!!! Well, I'm very very excited for the next episode!

BTW To those that think Sandra's ain't doing anything yet? Can anybody just think of what she did to Coach just to save her and Courtney's butts in the game? I call it Flawless! She knows that Russel is a very emotional player, his weakness and she aimed for it and she hit it! BULLSEYE! Though I was quite surprised that He voted for Courtney on that Tribal and even WROTE HIS SIGNATURE on the Parchment. But I came to realize that he did that so that Coach will vote for him if he swooped up till the Finals :D

CAN'T WAIT TILL IT'S NEXT WEEK'S EPISODE!!! But for all survivor fans, Aren't you bugged that when it's time for a BIG Episode when the Survivor Recap Episode Airs instead?
By Stevenson Que